Why Buy a 2016 MINI Cooper Countryman? 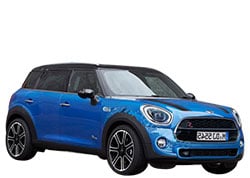 Should You Buy a 2016 MINI Cooper Countryman? Here are the Pros and Cons

Critics say the cargo space is quite small for the new 2016 Mini Cooper Countryman, but that won’t matter much given the new specs it packs. On the road, the Mini Cooper’s acceleration is pretty fast and handling quite nimble. The potential buyer will also get a chance to select what kind of engine they want under the hood—from the two options available.

The 2016 Honda HR-V will be one of the big competitors against the Cooper, also sporting a chic body design and outright cheaper. Now for the big question; does the 2016 mini cooper countryman have what it takes to become the worthy buy?

1) A Wide Array of Colors

From the first glance, the consumer has plenty of hues to pick for their preferred car. The color palette has a total of 10 choices that include:

The 2016 Mini Cooper Countryman will officially be released as a manual transmission sports utility vehicle. Quite the delight for the petrol head who loves to shift gears while accelerating on the highway. All four trims will come out as manually driven vehicles with the option of automatic on request by the buyer. Honda is releasing the HR-V 2016 model in eight trims, with six of them engineered with automatic transmission.

What’s a sports utility machine without a high-tech sound system to pump great music on the highway? To start off is a built-in AM-FM stereo radio with additional CD and MP3 players. There is satellite radio to keep connected even when out of network range and HD radio to have favorite stations broadcasted on crisp digital sound.

The 2016 Mini Cooper Countryman interior evokes that executive status with the seats either in quality leather or clothe material. The seats are made from a high-grade synthetic material, and they can be fitted with lumbar support for both driver and passengers. Additional bucket seats are available for additional space, and the driver’s seat alone can be fitted with heating technology for comfort but on request.

The 2016 Mini Cooper Countryman packs a 4-cylinder engine and a 6-speed manual transmission under the hood. Test drivers were impressed by the superfast acceleration and smooth handling on the road ranking it as one of the best sports utility vehicles that will come out. The 2016 Honda HR-V carries the same 4-cylinder engine under the hood with the option of a 6 speed manual or automatic transmission.

Some critics say the controls at the front can get quite mind-boggling but with time, one gets the hang of it. The built-in cruise control button allows the driver to set their own speed limit while the steering is adjustable for comfortable handling. Another tweak on the steering wheel is the addition leather wrap for a comfortable grip. Other perks to come with the 2016 Mini Cooper Countryman include:

For a vehicle with powerful acceleration abilities, one would expect it to have a reliable braking system to stop when need be. The 2016 Mini Cooper Countryman gives exactly that by incorporating 4-wheel ABS braking technology on all wheels. To reinforce this is brake assist, traction, and electronic stability controls. Airbags reinforce the entire car from the driver’s side to the passengers, on the rear and side heads and general sides of the vehicle.

The driver who still wished the 2015 Mini Cooper Countryman design was maintained has their prayer answered. Once it comes out, the same colors are left intact and the exact design. Engine performance improvement is the new perk drivers are going to enjoy.

10) Chance of Adding Tweaks to the Mini Cooper

On request, the driver can have a dual sun/moon roof with tilt power abilities. The body design can be reshaped a little by requesting an additional rear spoiler at the back. More extra goodies that can be thrown in include:

Reasons Not to Buy a 2016 MINI Cooper Countryman – The Cons

One of the top complaints critics have had with this sports utility ride is the quirky control system at the front. Secondary controls are not logically arranged and may take the driver a while before they can tell where each button is placed without looking.

For a mini SUV that looks so enormous on the outside, and includes a bucket sit, it’s rather sad the cargo space is tiny. So anyone thinking of a road trip with friends of the family may have to think twice about luggage size.

Yes, the driver has a variety of color options, but there is no difference from what was offered in 2015. Moreover, the body design from front spoiler to rear bumper is all the same with no change at all. This would be rather disappointing, especially when the Honda CR-V 2016 looks more suave on body design.

Compared to the 2015 model, the 2016 Mini Cooper Countryman hasn’t changed that much. Nonetheless, test drivers loved the power of the 4-cylinder engine and its nimble handling. Then again it may not be the choice car for the driver who isn’t comfortable with manual transmission; the 2016 Mini Cooper Countryman will face stiff competition from the 2016 Honda CR-V on this one.
2016 MINI Buying Guides: