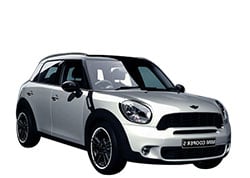 Should You Buy a 2016 MINI Cooper Hardtop? Here are the Pros and Cons

For the drivers who are seeking an exciting daily-driver, the 2016 MINI Cooper Hardtop deserves a test drive. The hatchback’s poised driving dynamics and quick acceleration will impress a lot of car enthusiasts. While the base model offers the best gas mileage, the high-powered John Cooper Works version is exceptionally quick. In contrast to the typical commuter car, the Cooper Hardtop brings a lot of style to the table.

Aside from a few revisions in the available trim levels, the 2016 MINI Cooper Hardtop has not received any changes.

The average driver will be impressed with the base model’s performance. Its turbocharged three-cylinder engine churns out a respectable 134 horsepower and 162 pound-feet of torque. Because of the hatchback’s curb weight of only 2,625 pounds, it feels quite powerful. When tested at the track, the compact ride hit 60 mph in a quick 7.3 seconds.

For the car shoppers who want an extra degree of performance, the turbocharged four-cylinder engine will keep them entertained. The larger 2.0-liter engine pumps out a hearty 189 horsepower and 207 pound-feet of torque. Fortunately, drivers can still look forward to getting an impressive 33 mpg on the highway. The Cooper S model needed only 6.3 seconds to hit 60 mph.

In terms of sheer performance, the John Cooper Works model is clearly the fastest version. Although it comes equipped with the same four-cylinder engine, it has been tuned to churn out a muscular 228 horsepower and 236 pound-feet of torque. To further aid performance, it has also been equipped with an aerodynamic body kit and a sports-tuned suspension.

Although the John Cooper Works version offers the sportiest performance, even the base model is extremely nimble. When traveling on curvy roads, the car’s body remains flat and stable. According to most automotive journalists, the 2016 MINI Cooper Hardtop is one of the best handling FWD cars on the market. An electronic limited-slip differential comes standard.

No other vehicle in its particular class resembles the 2016 MINI Cooper Hardtop. The hatchback’s signature headlights and retro styling cues make it stand out from the competition. A rear spoiler and an available center-exit exhaust take the car’s curb appeal to the next level. MINI also offers some very unique paint schemes and wheel packages.

There are only a handful of vehicles that offer a more unique interior. The cabin’s round gauges and cool-looking display screen give it a signature look. From a quality standpoint, its interior is a class above the competition. Even the gear shifter has a unique design. Buyers can choose from a wide variety of accessories.

The 2016 MINI Cooper Hardtop S comes standard with a nice-sounding exhaust. This means that owners can avoid the expense of upgrading to an aftermarket system. When accelerating or revving the engine, the exhaust emits a muscular growl. True car enthusiasts will certainly appreciate the exotic exhaust note.

From groceries to sporting equipment, the hatchback can haul around plenty of stuff in the back. The four-door model is definitely more versatile than the average sedan. While some vehicles offer a larger cargo area, the Cooper Hardtop’s boxy design makes it easy to load items into the back. With the rear seat folded down, the four-door version offers 40.7 cubic feet of storage room.

Buyers have the ability to choose from a long list of exciting options. Featuring a total of 12 speakers, the Harman Kardon audio system pumps only plenty of bass. When cruising around town on a gorgeous afternoon, the dual-pane sunroof will enhance the driver's enjoyment. Some of the other upgrades include sport seats, an automated parking system, and an adjustable suspension system.

Rev-matching technology comes standard on the 2016 MINI Cooper Hardtop. When changing from one gear to the next, the engine and transmission work in perfect harmony. This feature certainly helps enhance the car’s overall fun factor.
Buying Tip:

Reasons Not to Buy a 2016 MINI Cooper Hardtop – The Cons

1) Must Use Premium Fuel

Although the Cooper Hardtop is efficient, the automaker recommends the use of premium gas. This could be a factor for the drivers who want to save as much money as possible.

While young children will find the backseat to offer plenty of room, the average adult will desire more space. When taking a long-distance road trip, some of the passengers may become stiff and uncomfortable.

3) More Expensive Than Some Other Hatchbacks

With a starting price of around $25,950, the 2016 MINI Cooper Hardtop is more expensive than the typical hatchback. Buyers can expect to pay more than $31,000 for the muscular John Cooper Works model.

The new Cooper Hardtop’s exciting performance and top-rated interior will excite a lot of car shoppers. Buyers will also have the ability to customize the hatchback’s appearance. From a styling standpoint, the European hatchback stands at the top of its class. Although the 2016 MINI Cooper is not made for large families, it is a more than capable daily-driver.
2016 MINI Buying Guides: