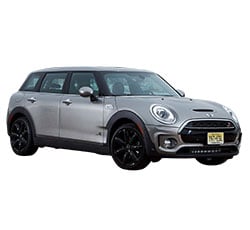 Should You Buy a 2017 MINI Clubman? Here are the Pros and Cons

Known for its unique styling, the 2017 Mini Clubman continues to offer a fun driving experience. There are plenty of car shoppers who will like the British hatchback’s customizable interior and sharp handling. While even the base model will put a grin on your face, the high-powered John Cooper Works version offers an addictive level of performance.

This year, you can now opt for an AWD package. In the past, only the high-performance John Cooper Works model offered all-wheel-drive traction. A new touch-screen display is also available.

All versions of the 2017 Mini Clubman are rated to return more than 30 mpg on the highway. However, the base Cooper model is especially efficient. A small, turbocharged three-cylinder engine helps the hatchback to conserve fuel. According to the EPA, you can expect to get a solid 25 mpg in town and 33 mpg on the open road.

Because the 2017 Mini Clubman is a rather lightweight car, even the base engine feels relatively peppy. Nevertheless, the Cooper S model’s turbocharged four-cylinder engine helps the hatchback to deliver a more entertaining performance. The larger engine develops a healthy 189 horsepower and 207 pound-feet of torque. When accelerating from a stop, you will immediately feel the extra muscle.

Like virtually every other Mini vehicle on the market, the Clubman promises to offer great handling. It is among the most athletic cars in the class. You will love taking the Clubman on a curvy back road. If you desire enhanced ride comfort, opt for the Sport package. It comes with upgraded wheels and an adaptive suspension.

If you demand the highest level of performance, the John Cooper Works version is the perfect option. Its racy engine kicks out a thrilling 228 horsepower and 258 pound-feet of torque. The extra power enables the John Cooper Works model to hit 60 mph in a blistering 6.2 seconds. A sports-tuned suspension promotes especially sharp handling.

Driving enthusiasts recognize the value of having a powerful-sounding exhaust. The available JCW sport exhaust system certainly promotes an extra degree of driving excitement. The free-flowing exhaust gives you the feeling of driving a true sports car. Aside from the exhaust system’s beautiful sound, it also helps the hatchback to develop more power.

For the first time, the lower trims can now be outfitted with all-wheel drive. This should be exciting news for the drivers who live in a snow-prone region. The ALL4 system continuously monitors the road conditions. If one of the wheels experiences a loss of traction, the computer will quickly make the necessary adjustments.

British styling helps distinguish the 2017 Mini Clubman from today’s other hatchbacks. A flat roof and unique headlights accentuate the car’s classic appearance. When equipped with twin exhaust tips, the Clubman looks especially sporty. You can even customize your Clubman by choosing from a number of different wheel designs. Optional hood stripes give the hatchback a very racy look.

You are destined to appreciate the Clubman’s unique tailgate doors. Not only do they give the hatchback an additional coolness factor, but they also make it easy for you to load cargo. The hands-free doors can be easily opened by the motion of your foot. This feature will certainly come in handy when carrying an armful of groceries.

If you are trying to spend your money wisely, the base 2017 Mini Clubman is not a bad choice. Although it has the least expensive price tag, it still rewards you with a fun driving experience. Some of the base model’s standard technology includes Bluetooth, smartphone integration, and a 6.5-inch infotainment display. Prices start at less than $25,000.

The 2017 Mini Clubman can be loaded with goodies. Featuring a powerful amplifier and a total of 12 speakers, the Harman Kardon audio system sounds fantastic. An 8.8-inch touch screen enables you to quickly select your favorite apps. Meanwhile, the panoramic sunroof transforms the Clubman into a more exciting hatchback.

The 2017 Mini Clubman is a bit more expensive than some of its key rivals. If you crave the high-performance John Cooper Works model, be prepared to spend at least $35,000. By comparison, the powerful Ford Focus ST has a starting price of only $24,775.

2. May Be a Bit Too Small for Some Families

If you are looking for a new family vehicle, be sure that the Mini Clubman offers enough space. Rival hatchbacks, such as the Volkswagen Golf, offer a significantly more spacious backseat.

3. So-So Performance from Base Engine

With a total production of 134 horsepower, the base engine may leave some drivers wishing for more performance. The automatic-equipped model recorded a 0-60 time of about 9.3 seconds, which is not remarkably quick. To experience brisker acceleration, step up to the Cooper S model. Its engine produces an additional 55 horsepower.

The 2017 Mazda3 hatchback and the Toyota Corolla iM compete against the Mini Clubman. When equipped with an upgraded engine, the Mini Clubman is noticeably quicker than the both of these rivals. An optional AWD system gives the 2017 Mini Clubman yet another advantage.

Although the 2017 Mini Clubman has an above-average price tag, it does reward you with a great deal of driving excitement. If you are looking for a fun daily-driver that won’t break your budget, consider sticking with the base model. The arrival of an all-wheel-drive system has made the Clubman an even more satisfying winter vehicle.

Compare Local Dealer Prices
Find the Best Deal
Save Thousands on a 2017 MINI Clubman! Start Your Own Online Price War