2018 MINI Clubman Pros vs Cons. Should You Buy? 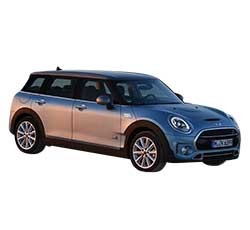 Should You Buy a 2018 MINI Clubman? Here Are Some Reasons For and Against

MINI has never been a company to shy away from bold, small cars that pack a punch on the road. The 2018 MINI Clubman is one of these cars, a two- or four-door, instantly recognizable subcompact that comes in two trims: the MINI Cooper and the MINI Cooper S.

MINI keeps its formula fairly similar to that of last year, only bringing in a few new or tweaked features for the 2018 MINI Clubman. The biggest change is that a rear-facing safety camera now comes standard, as opposed to an optional upgrade on all trims. Other small changes include design and aesthetic tweaks to the fuel gauge and the turning indicator.

You wouldn’t expect such a tiny car to be able to carry much luggage or cargo, but the 2018 MINI Clubman does surprisingly well. The four-door subcompact offers 17.5 cubic feet of cargo space with the rear seats up, and an astounding 47.9 cubic feet of space with the seats folded down.

If you’re a car fanatic, you probably get a bit annoyed when car models don’t offer a manual transmission. Thankfully, the Clubman offers both manual and automatic transmission. Both of these choices are 6-speed transmissions, and they both feel great on the road.

All MINI models come standard with front-wheel drive, but the Clubman offers the choice of upgrading to all-wheel drive. With the massive 228-hp engine, we highly recommend the all-wheel drive upgrade. The immense power and light weight of the vehicle make it slightly less grippy than you’re used to in other vehicles, but with all-wheel drive, the car feels extremely solid on the road.

MINI doesn’t slack when it comes to upgrade and package options. One of the most interesting package upgrades you can get is the Technology package, which includes automated parallel parking. Since the car is so tiny, having assistance squeezing into those tiny spaces available in cities is a huge plus. The Technology package also includes front-facing cameras, an alert system, and Apple CarPlay support.

Though you may remember the classic MINI coloring and scheming of the British flag, the new 2018 models come in so many colors and themes that it’s hard to believe. From the sleek, sexy Moonwalk Grey to the specialty MINI Yours LapisLuxury Blue, there is sure to be a color that fits your personality perfectly.

Not many cars have the privilege of offering a special edition version, but the 2018 MINI Clubman does. The Clubman has a special John Cooper Works edition, named after the man who introduced the MINI Cooper to the racing world in 1961. This model has some small interior tweaks, but the exterior has some significantly different features that show off the true sportiness of the car.

The 2018 MINI Clubman comes standard with a pop-up HUD (Heads-Up Display). This display shows useful information near the driver’s line of sight without too much distraction. Information like current speed, navigation directions, and infotainment alerts can all be shown on the HUD.

As the engine and under the hood specs of the 2018 model have not changed from the 2017 model, there shouldn’t be too many differences in fuel economy. The 2018 model should get around 21 miles per gallon in the city and up to 31 mpg on the highway - pretty good for an engine this size.

If you’ve always wanted a car that everybody instantly recognizes on the road, then the 2018 MINI Clubman is one of the best choices. The classic MINI shape is noticeable and hip, and the Clubman adds a new twist onto that with its delicate curves.

Though the MINI’s cargo space is surprisingly large, the general amount of space in the Clubman isn’t so great. It is true that you shouldn’t expect much with a MINI given its reputation as a small, sporty car - but the Clubman does feel sort of cramped otherwise.

While the infotainment system is extremely well-designed and intuitive to use, it can feel somewhat sluggish. Switching through menus can take a bit of time. That said, the ability to use the HUD in combination with the system is absolutely great.

For the horsepower in the engine, the car doesn’t quite accelerate as fast as you think it would. It takes the car about 6.7 seconds to get from 0 to 60 miles per hour, a little slower than other subcompacts in this class.

Compared to similar cars in the class like the Ford Fiesta and the Honda CR-Z, the 2018 MINI Clubman has significant upsides. Its great engine and responsive driving are significantly better than its competitors. That said, the lack of acceleration and slow infotainment system may make some of these other models more enticing.

If you’re looking for a great subcompact vehicle that handles well on the road and has a heavy, powerful engine then the 2018 MINI Clubman is a great choice. The color choices and upgrade options help you personalize the car, and the interior technology merges seamlessly to make this a car you won’t want to wait to test drive.