2021 MINI Countryman Pros vs Cons. Should You Buy? 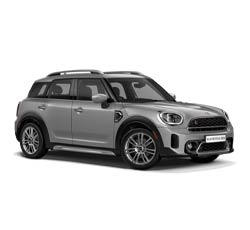 Should You Buy a 2021 MINI Countryman? Here Are Some Reasons For and Against

MINI's biggest and most expensive vehicle comes in the form of the 2021 MINI Countryman. While the other MINIs are typically small (as one should expect), the Countryman is different. Unlike the others, it can comfortably seat taller adults in both rows of seats. That's right - adults won't be ducking down for head space in the rear seat!

Not only does the Countryman offer more cabin space, it ups the amount of available cargo space as well. With all of its seats kept upright, you get about 17 cubic feet of cargo space. That can be maxed out to 47.9 cubes when you fold the rear seats down. Imagine that, being able to fit multiple pieces of luggage or several golf club bags in a MINI! You bet we dig it.

Only a few small updates have been made for 2021, as the Countryman's second generation was introduced onto the market in 2017 and has since seen a few tweaks. This year sees the deletion of the chrome highlighting on the newly revised front grille. You also get a cool Union Jack design on the taillights that reminds you of how very British this car is in nature. More new features can be found inside of the cabin.

While the Countryman makes for a thrilling ride, it does have a few downfalls, chief among them being the fact that the cargo space still doesn't match up with other SUVs. On top of that, you have to supply the engine with premium fuel. In other words, you will be spending more on fuel than you might like.

That being said, there is a lot to know about the 2021 MINI Countryman before you decide whether you want to buy it. In this review, we will go over what is new for 2021, what we like about the Countryman, what we would like to see changed, and how it stacks up against a few top rivals. Be sure to read through to the conclusion, which is where we will issue our final verdict on the Countryman.

The biggest changes to the 2021 MINI Countryman are the exterior restylings. The front grille is totally resculpted and lacking the chrome highlights from last year, and the taillights now feature the Union Jack-esque design mentioned above. Inside of the Countryman, there is upgraded leather upholstery and additional surface options. Another option that gets tacked on is a digital instrumentation panel for those who want something more high-tech.

The biggest advantage to owning the 2021 MINI Countryman is its striking - and very British - design. Were the steering wheel on the other side of the car, we'd expect to see this driving along one of England's charming country roads. The revamped front and rear fascia look chic and sporty, and the interior has plenty of design elements - including leather and leatherette options - that make it look more expensive than it really is.

The types of materials used inside of the Countryman lend to its posh nature. The higher you go in the sub-trims, the more access you get to upholstery and surfaces done in high-grade materials like leather and leatherette. There are enough soft touch surfaces to be found, and nothing comes across as looking, feeling, or sounding cheap when you drive the vehicle.

The John Cooper Works (or JCW for short) is the top-of-the-line main trim level on the Countryman, and it is definitely the most powerful. Its source of power is a tweaked version of the base turbo 4-cylinder engine, which gets the JCW 301 hp and 331 lb-ft of torque. An 8-speed automatic transmission and all-wheel drive come standard. Due to its enhanced power, the JCW is even sportier to drive, making for a more thrilling driving performance.

4. The Adaptive Suspension on the JCW

One of the aspects of the JCW that make it sportier to drive is the adaptive suspension. It is most comfortable while in the normal drive mode, keeping the body controlled at higher speeds and absorbing bumps on slower-speed city roadways. Sport mode does get noisier, but it works well when you are driving along winding mountain roads.

Up front, you and your passenger will get treated to some remarkably cozy seats. While they do feel a bit firm inside of the JCW, the standard cloth feels nice. The upgraded leather upholstery is also pretty breathable. While leg support is not as plentiful as you might desire, the lateral and lumbar support are enough to keep you cozy during long road trips.

6. Controls are Easy to Use

Technology might not be MINI's strong suit, but they keep it simple with easy-to-use controls along the dash. You will not need to spend time figuring out what knob controls which feature and how to adjust them. The learning curve is short due to the clear layout.

A raised ride height means that occupants will have an easy time getting in and out of the Countryman. The door openings are just the appropriate width and height to aid in this. You will not have to duck your head down to get in, and the step in is short enough without being too short.

Upgrading to the Harman Kardon premium sound system is something a lot of buyers will want to do. This sound system pumps concert-like sound quality from its speakers and makes for a solid investment over the standard 6-speaker sound system. It comes standard on the line-topping Iconic sub-trim but is optional on the lower sub-trims.

Interior small item storage areas might not be massive, but they are cleverly designed and placed in just the right areas of the cabin. The front of the cabin does get some well-sized storage bins that will fit your cell phones, smaller tablets, keys, and - of course - your sunglasses. There are also enough cupholders. The door pockets, while not too terribly large, are practical and efficient for storing smaller items.

Reasons Not to Buy a 2021 MINI Countryman – The Cons

Rear outward visibility is the only aspect of the external view that gets hampered. This is mostly due to the Countryman's thick rear roof pillars limiting the size of the glass panel. This creates some blind spots, so drivers will need to be aware of this as they go about their day. Blind spot monitoring and a rear-view camera can help with this.

The infotainment screen is narrow and kind of long, but it gives the impression that it is smaller than what you will find in most 2021 vehicles. The size is just too small for it to really be of any use to drivers. It is quite the reminder of how dated the Countryman feels in terms of its standard technology.

Another reminder of how outdated the tech line-up is, is the noticeable lack of Android Auto for smartphone app integration. Only iPhone users can sync their apps, as Apple CarPlay is exclusive to the MINI Countryman. This alienates a lot of drivers and might be a main reason people turn away from buying the Countryman.

Unfortunately, you will be spending more at the pump if you buy the Countryman. Unleaded fuel is not an option here, as premium is required. While EPA estimates peg the Countryman a bit below some of its rivals, this is further impacted by the exclusivity of premium fuel. This isn't a cheap vehicle to begin with, and you will pay more over the course of ownership than you might for some of its rvials.

Looking for a more affordable alternative to the 2021 MINI Countryman? Then you might want to check into the 2021 Mazda CX-5. This vehicle has an impressive blend of precision steering and handling that make it fun to drive. Also, it has an optional turbo engine that amps up the power output. Quiet and reserved even at highway speeds, the cabin is serene as well as it is topped off with luxurious features for it nto being a luxury SUV. The downsides? The base engine feels kind of weak, and the ride quality might be too stiff for some people to truly enjoy.

The 2021 Honda CR-V is perpetually a top performer in its class, and there is little wonder as to why. A generous fuel economy paired with a good power output from the engine option makes for quite the ride. The comfort level is high inside of the cabin, and the storage spaces are both abundant and clever in their designs. The only problem with the CR-V is that the touchscreen display is sometimes glitchy.

There are a lot of things to enjoy about the 2021 MINI Countryman, but its chief area of dominance is in its distinctively British style. There are many ways that you can configure the Countryman, which is a major part of the appeal. While there are some practical elements to this small SUV, it might seem overpriced compared to other vehicles in its segment. Were MINI to make some serious tech overhauls, the Countryman might be better able to compete with its rivals.