2022 MINI Countryman Pros vs Cons. Should You Buy? 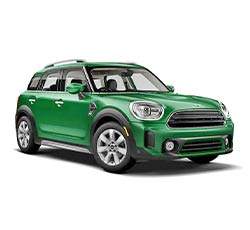 Should You Buy a 2022 MINI Countryman? Here Are Some Reasons For and Against

MINI's biggest vehicle is still small compared to its rivals. But that doesn't necessarily hold the 2022 MINI Countryman back from being a good vehicle. When pitted against similarly equipped (and priced) competitors, the Countryman feels much more confining in terms of space.

Perhaps you aren't someone who needs the excess space though. Perhaps you only drive one or two extra people on a regular basis and won't be cramming three adults into the rear seat (which won't work out well). Perhaps you don't mind spending a little more on required premium fuel. If that's the case, you might find yourself enjoying the Countryman.

Let's just be blunt here - the Countryman doesn't look like any other vehicle out there. Its competitors lack this distinctively British throwback style. Inside and out, the Countryman is totally, uniquely MINI. And, since it is MINI, there are a lot more high-quality materials used inside of the cabin than what you will find in other subcompact SUVs.

The Countryman might not look the part, but it is actually fun to drive. If you buy the John Cooper Works (JCW) style option, then you get the pleasure of zipping around with a turbocharged four-cylinder engine under the hood. This engine has no problem putting up 301 horsepower and 331 lb-ft of torque, making for a 5.2-second sprint up to 60 miles per hour.

The 2022 MINI Countryman isn't for everyone, but some folks will really take pleasure in owning one. Let's go over what is new for 2022, what there is to like about the Countryman, what holds it back, and how it stacks up to a few top rivals.

MINI made a few changes to the 2022 MINI Countryman. There is a new Oxford Edition being released this model year, and a fresh-faced digital instrumentation display makes its debut. A few tweaks have been made to the exterior styling, but the vehicle still looks pretty similar to the 2021 line-up.

1. A Unique Interior and Exterior Design

It seems that the biggest reason that people buy a MINI is that is has a distinctive personality. This car is designed for people who like practicality but want to stand apart from the crowd. Despite not having been seriously updated in a while, the MINI Countryman's interior and exterior styling cues are on point with what you see on the road in Britain. You won't see anything else like the MINI State-side. You'll never mistake your car for another in the parking lot, that's for sure.

MINI utilizes some seriously high-quality materials in their design. Subcompacts aren't really known for their superior quality when it comes to interior décor, but MINI hammers it home with some solidly built, good-looking styling cues. You won't find any paneling gaps or hear any funny rattling noises while you are on the road. Everything feels firmly pieced together.

The base engine does a fine enough job, but the JCW's turbo engine really provides the spunk the Countryman needs to cruise onto the highway. The fact that it can get up to 60 mph in just over 5 seconds is pretty impressive for a subcompact SUV. It is undeniably sporty and should provide some thrill for drivers.

Handling is also quite spirited on the Countryman. The JCW especially feels grippy and changes directions precisely when you direct it to. The vehicle is responsive and stable with body motion kept well under control as you round through turns.

The JCW's adaptive suspension can be a little too firm if you flip it into Sport. However, in default, it feels remarkably comfortable - about as comfy as the standard suspension. It has no problem dispatching the types of bumps you will encounter on city roads, and you still get a lot of body control when you take the vehicle up to speed on the highway.

They might not be terribly fancy, but the Countryman's controls are straightforward enough for the average user to quickly figure out. The new digital instrumentation display might require a little getting used to, but it is nothing too confusing. and makes for a nice addition to the Countryman.

With its raised ride height, occupants can easily get in and out of the Countryman without any painful head bonks or having to duck down. The fact that the front and rear doors are relatively short in length lends to this ease of access on the Countryman. It also makes getting cargo in and out of the cargo area less of a hassle.

The Countryman's small cabin is easily filled with crisp sound from the available Harman Kardon premium sound system. You get a good amount of sound clarity when you crank up the volume, and there is no real sound distortion that should come through the speakers. It is a high-quality system built for avid music listeners.

Inside of the Countryman's cabin are a series of small item storage areas that, while they are not huge, are quite functional. There are plenty of places for you to stash your tablet, cell phone, purse, sunglasses, and drinks. The door pockets give you extra space for various objects even though they aren't as large as what you get in other vehicles.

10. There Are Many Ways to Customize the Countryman

With four models, three trim levels, and a bunch of optional packages available, there are many ways in which you can customize the Countryman. MINI makes it so that whichever vehicle you build, it will be uniquely yours. It really is hard to find two MINIs that are exactly alike.

Reasons Not to Buy a 2022 MINI Countryman – The Cons

The most obvious drawback to owning the 2022 MINI Countryman is that it does not have as much cargo or interior space as many of its competitors. Subcompacts aren't exactly known for being superbly spacious, but MINIs are definitely, well, mini. The 40/20/40-split folding rear seats do help with pass-through space for bulkier cargo, but the releases are located on the rear passenger doors, not in the cargo area, which makes things even more difficult.

Sorry, Android owners. Android Auto isn't available on MINI vehicles. You will have to use Bluetooth instead of smartphone app integration. Apple CarPlay is available for iPhone users. Most vehicles offer both as standard features now, so the lack of Android Auto is a bit puzzling.

3. The Seats Could Use More Padding

While they aren't necessarily uncomfortable, the Countryman's seats could use a little bit more padding. There is basically no support there for your thighs despite there being more than enough side bolstering on the seatback to keep you locked in place. The seats just come off as feeling awkward and less comfortable than they could be.

You will want to rely on the rearview camera for backing up since there is limited visibility out the back. While it isn't terrible, the smaller side windows in the rear don't lend much to visibility. The rear window is also pretty short.

The 2022 BMW X1 is a much more expensive option since it resides within the luxury segment. It has the signature BMW high-quality design inside and out, and its turbo engine puts forth plenty of power. Also, its handling makes for an engaging drive. What's more, you get a roomy cargo area and rear seat - definitely more spacious than the Countryman. However, the X1 comes off as being a little plain for a BMW. It also suffers from a rough ride quality when you take it across loose gravel or dirt roadways.

Not nearly as much fun to drive is the 2022 Audi Q3. With its restricted in-cabin storage spaces and poor fuel economy, the Q3 is one Audi that a lot of buyers tend to pass over. On the plus side, the Q3 offers a good amount of passenger space for being a subcompact. The ride quality is calm and the cabin tranquil and outfitted with high-quality materials. You also get treated to a massive slew of current-gen tech and safety features for the price.

The 2022 MINI Countryman is a subcompact SUV that you can make into your very own vehicle. It is definitely a vehicle meant for people who are proud of their personalities and want their vehicles to have a lot of personality too. The optional turbo engine on the JCW is powerful and spirited, and the handling capabilities make for an engaging driving performance. Just remember, a MINI is going to be small, so you will feel pinched for space if you normally drive multiple people around or haul a lot of cargo.

View Pros and Cons for other MINI Models: