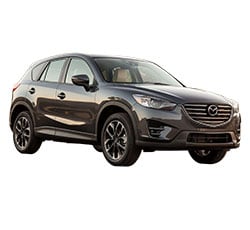 Should You Buy a 2016 Mazda CX-5? Here Are Some Reasons For and Against

The 2016 Mazda CX-5 is definitely a compact SUV to look forward to, having an outstanding engine performance and great fuel economy on the road. Its closest competition is the 2015 Honda CR-V which also dons a competitive body design and packs some attractive features under the hood. But of course the Mazda is set to be more affordable, given its cheaper starting price to the Honda.

There has been some great improvement from the 2015 Mazda CX-5 model, including a fresh body design to accentuate its purpose as a Sport Utility SUV. Critics see a stiff competition in the two SUVs, with the Mazda CX-5 2016 having to prove that it is worth the consideration as a Sport SUV. At this juncture, here are some good reasons why casting one’s lot on the Mazda is a great idea.

Looking close at the 2015 model, it’s clear to see that Mazda maintained the same body dimensions in the new 2016 version. But one can easily notice the additional tweak on the side doors and major enhancements that make the 2016 Mazda CX-5 look quite elongated and lean more towards a Sporty look. The consumer also gets a rear spoiler at the back, which is an optional feature that was offered in the preceding model as well.

Compared to its predecessor, the Mazda CX-5 has maintained the same fuel efficiency of 26/35 mpg in city and highway cruising. The Automatic transmission version manages an EPA of 26 city/33 highway. Compared to the Honda CR-V 2015, the manual transmission model gives more stiff competition as its automatic counterpart stays close within the competition.

Critics appreciated the vehicle’s stellar performance on the road. The Mazda CX-5 2016 is a front wheel driver SUV spotting a 6-speed transmission gear box on all base models. On the road, the automatic version provided sweeter acceleration power while the manual model boasted of a smooth transmission between gears, rivaling some of the top-tier compact SUVs out there.

Rocking the same numbers dimension-wise, the Mazda 2016 CX-5 still has that compact look adored in the previous model. Placed side by side with the Honda, this model is quite lengthier by a few inches, which translates to more interior space.

Test drivers marveled at the exquisite and quite practical interior design all forged from materials of high quality. The front row seats deliver the much needed comfort for two adults to fit in. The rear seats are even more spacious with ample leg room for adults as well.

Mazda lovers would be grateful for the extra infotainment amenities provided in the 2016 CX-5. This new model will include two new features, HD radio and Satellite radio which will be integrated on request. This puts it ahead of the Honda which is yet to consider the importance of crisp radio quality even when driving through a remote desert. Standard amenities the consumer still enjoys in the new model are AM-FM radio, MP3 player, CD player and an auxiliary audio port.

It was a great idea to maintain the same level of horsepower on the 2016 CX-5 because that puts it in close competition with the Honda CR-V 2015. While the Honda packs 185 Hp at 6400 rpm, the Mazda doesn’t do badly at 184Hp at 5700 rpm. Nonetheless, the Mazda Sport SUV packs more towing power to a maximum of 2000 lbs compared to Honda’s 1500 lbs. Moreover, the Mazda includes a new feature, the Trailer Hitch Receiver, which the Honda lacks.

Both the Mazda and Honda level up the scores on some of the wheel features found in standard Sports SUVs. They both rock All Season tires on the front and rear and in built pressure monitoring system. Mazda however takes the lead by throwing in an extra feature, the optional Wheel locks, which lacks in the Honda.

Even though the Honda throws in a few more dollars on the price tag, it stays within the same range of affordability as the Honda. The Mazda CX-5 2016 is roughly priced at $23,600 while Honda CR-V 2015 is retailing at $23,350. Only a few dollars to add and enjoy some extra features the Honda is missing out on.

The 2016 Mazda CX-5 chose to go with relaxed hues for the exterior namely Jet Black, Meteor Gray and Sonic Silver. There is no screaming bright colors like blue or red so to speak. Well, Mazda may have slashed several options off the color scheme, but the overall result is a Sport SUV with a toned down executive look.

Though the Honda 2015 CR-V has lots of standard features, it still lacks a few vitals which any consumer would expect in a standard Sport SUV. Luckily, the Mazda2016 CX-5 will provide it all from back-up cameras, fog lamps, keyless start, remote engine start and luggage rack.

Mazda may have left out the loyal fans who would want more than just the three color options provided. One would have wished for Mazda to consider more hues given they also provided a limiting three in the previous model. Unfortunately enough, it won’t be able to compete against the Honda which is offering over 11 different colors to choose from.

Even with the abundance of infotainment features, there are critics who still feel the sound to be below par.

Mazda 2016 CX-5 maintains the same level of horsepower as its predecessor, which according to critics is under powering the vehicle. This has taken a toll on the vehicle’s performance on the highway as many consumers claim it is sluggish compared to city cruising.

With less focus on the drawbacks, the 2016 Mazda CX-5 has definitely received a dazzling exterior makeover with an interior to write home about. It packs a reasonable amount of engine power and shifts smoothly on manual transmission, not forgetting its accelerative prowess on the automatic model.