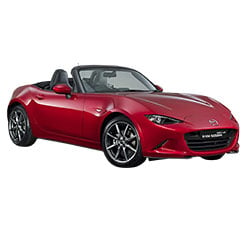 Should You Buy a 2017 Mazda MX-5 Miata? Here Are Some Reasons For and Against

For years, the Mazda Miata has remained one of the most affordable sports cars on the market. Not only is the 2017 Mazda MX-5 Miata quick and responsive, but it also returns good gas mileage. Distinctive styling makes the iconic roadster even more charming. Unlike the previous generation, the new model offers an impressive list of modern technologies. It can be used as a fun daily-driver or a weekend track machine.

This year, Miata buyers can now obtain blind-spot monitoring and rear cross-traffic alert. The biggest announcement is the arrival of the Miata RF, which is a hardtop version.

All versions of the 2017 Mazda MX-5 Miata come equipped with a lively 2.0-liter, four-cylinder engine. It punches out a satisfying 155 horsepower and 148 pound-feet of torque. Although the Miata is less powerful than many of today’s sports cars, Mazda’s weight-saving SkyActiv technology makes it feel incredibly light on its feet. When tested on the track, the roadster recorded an impressive 0-60 time of 5.9 seconds.

2. More Efficient Than Ever

In the past, the Miata delivered subpar fuel economy for such a small sports car. Fortunately, drivers will now be rewarded with good gas mileage. Whether you choose the manual gearbox or the automatic transmission, you can obtain a solid 26 mpg in the city. When cruising along the highway, expect to get up to 35 mpg.

Although the automatic transmission is smooth, true driving enthusiasts will prefer the six-speed manual gearbox. It enables you to maximize the Miata’s performance capabilities. The clutch is very light, which helps prevent drivers from becoming fatigued in heavy traffic. If you decide to take the Miata to the track, the manual transmission gives you an additional measure of control.

4. Great Handling on the Street and at the Track

The 2017 Mazda MX-5 Miata is expected to remain one of the most popular track cars. Even when traveling on public roads, the Miata proves to be a blast to drive. It truly shines on curvy back roads. If you crave the optimum handling, stick with the Club trim. It comes standard with performance tires and sports-tuned Bilstein shock absorbers.

For the first time in history, the Miata can be equipped with a retractable hardtop. Not only does the hardtop look remarkably stylish, but it also enhances the car’s structural integrity. In comparison to the standard soft-top version, the 2017 Mazda Miata RF’s hardtop is far more durable. Furthermore, it takes less than 15 seconds for the RF model’s top to fold down.

Like the Porsche 911 and the Chevrolet Corvette, the 2017 Mazda MX-5 Miata has a very distinctive appearance. You will immediately notice the roadster’s wide grille opening and sleek hood. LED lighting and twin exhaust tips now come standard. A special set of BBS performance wheels are optional. Some of the tempting paint colors include Soul Red, Crystal White, and Blue Reflex.

If you can’t afford to own an exotic nameplate, don’t hesitate to take the 2017 Mazda MX-5 Miata for a test drive. Prices for the base Sport model start at slightly less than $25,000. Meanwhile, the new RF model has an attractive MSRP of $31,555. In contrast to the typical sports car, the Miata is inexpensive to maintain and quite reliable.

While behind the wheel of the new Miata, you won’t have to deal with any distracting technologies. The standard Bluetooth technology works great with virtually every type of mobile phone. Featuring a 7.0-inch touch screen, the optional infotainment system allows you to quickly surf through the available apps. Both the audio system and the climate control system are a breeze to use.

The arrival of blind-spot monitoring molds the 2017 Mazda MX-5 Miata into an even better sports car for everyday commuting. When driving in a crowded parking area, rear cross-traffic alert enhances your awareness. Lane departure warning also comes with the optional safety package.

If you appreciate crystal-clear sound quality, the available Bose audio system will get your attention. It features headrest-mounted speakers, which help ensure good sound reproduction when riding with the top down. Meanwhile, a thumping subwoofer gives the system extra bass.

Although the current Miata offers more passenger room than previous models, it is still not considered to be a spacious sports car. This should be a key concern for the tall drivers who have long legs. Furthermore, a lack of a backseat means that parents will be forced to leave their children at home. There is also only a minimum amount of cargo space in the trunk.

Many drivers view the 2017 Mazda MX-5 Miata as the ideal summer sports car. Unfortunately, it is not a great performer in the snow. A rear-wheel-drive setup limits its ability to maintain good traction. Some owners may have to park their Miata for the entire winter.

The 2017 Mazda MX-5 Miata deserves credit for its brisk acceleration. Nevertheless, some car fanatics will desire a bit more oomph under the hood. In order to squeeze the most performance from the Miata, you must rev the engine to a high rpm.

Some of the key rivals include the Subaru BRZ and the new Fiat 124. In contrast to the Subaru BRZ, the 2017 Mazda MX-5 Miata benefits from a convertible top. Although the Fiat 124 actually shares the same chassis as the Miata, the long-term reliability of its turbocharged engine has yet to be proven.

If you are looking for a pure sports car that has an affordable price tag, the 2017 Mazda MX-5 Miata demands a serious look. With a few upgrades, it can be easily transformed into a competitive track car. Advanced safety technologies make it a secure daily-driver.