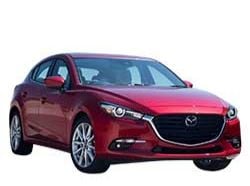 What 2018 Mazda Mazda3 Trim Level Should you Buy? What is the Difference Between Trims?

While Mazda has never had as strong of a market share as the other Japanese manufacturers, it is still a popular choice for many drivers due to their focus on efficiency, technology, and the driving experience. That number has steadily grown since Mazda introduced a fully redesigned version of their mass-market compact sedan and hatchback - the Mazda3 - in 2014.

The redundantly named Mazda Mazda3 is also known as simply the 3, and its latest edition has quickly become Mazda’s best-selling vehicle. Offered in two body styles and a variety of engines, it has combined two highly sought-after traits in compact cars. It was both fuel-efficient and fun to drive, things that were generally considered to be mutually exclusive.

As a bonus on top of that, the Mazda 3 was also packaged with some impressive technologies, including being among the first to offer key safety features like blind spot monitoring and automatic braking within the segment.

The 2018 Mazda 3 does not differ significantly from the 2014 model that launched the car’s third generation. Aside from a small visual refresh for the interior and the exterior last year, as well as some renaming of trim levels, Mazda has only added more standard features to the different models. It comes in three main flavors: Sport, Touring, and Grand Touring, as well as a hatchback and sedan body style, all of which are available with a manual or automatic transmission.

If that seems like a lot to figure out, don’t worry! This guide breaks down each of the trim levels to give you a sense of what each trim level is about and the major equipment and option differences between them.

Compare the 2018 Mazda 3 Sport vs Touring Trims. What is the difference?

Amusingly, the Mazda 3 Sport is actually the least sporty of the three Mazda trim levels, as it is the only one equipped with the smaller 2.0-liter engine. It produced 155 horsepower, but is slightly more efficient - about one mile per gallon - than the larger 2.5-liter engine used on the upper two trim levels.

It is priced at a slightly higher starting price than most other compact sedans and hatchbacks, but you do get a fair bit of value out of its standard features. It comes equipped with the usual set of basic features, such as power locks and windows, keyless entry, air conditioning, cruise control, and so on. There are also several nice standard safety features, including automatic emergency braking and a rearview camera. A push button start system and smart keyless entry are also standard across all models, as is the 7.0-inch infotainment system.

Mazda’s infotainment system is fairly unique for the mass-market compact class, and takes some getting used to. It uses both touch inputs and a selector knob mounted on the center console to make selections. While there is a slight learning curve to it, it makes using the infotainment system very quick and easy once you get the hang of it. It also has its own smartphone app integration framework, which is not quite on the level of Android Auto and Apple CarPlay in terms of functionality.

The good news is that the hardware on the Mazda 3 supports these applications, so if Mazda updates its software that functionality could be added to both new cars and those already on the road.

There are two optional packages available for the Sport model, though hatchback owners will only get access to one. The Appearance Package is available for both models and adds an aero body kit to the car, complete with a front air dam, side sills, mirror caps, and a rear diffuser.

The sedan-only Preferred Equipment Package adds alloy wheels, improved exterior and interior trim, automatic headlights and windshield wipers, and a blind spot monitoring system with rear cross-traffic alert. The alloy wheels are standard on the hatchback, but the rest of the equipment is not available on the Sport model with that body style.

In the middle of the model range, the Touring models are only a small step up in price for the sport, but comes with some substantial improvements. The major item is the larger 2.5-liter engine, which improves the output of the car to 184 horsepower, though at the cost of one mile per gallon in mileage.

Beyond that, the model includes leatherette seats with heating for the two front seats and power adjustments for the driver. Dual-zone climate control is also standard, as are the contents of the Preferred Equipment Package for the sport, such as alloy wheels, automatic headlights and windshield wipers, and the blind spot monitors with rear cross traffic alert.

The Appearance Package returns for both models, and there is also an available Bose/Moonroof/Satellite Radio Package. Offered on both the sedan and the hatchback, it adds the expected Bose audio, power moonroof, and satellite radio. Like all Mazda 3 models, the Touring is also available in both manual and automatic transmissions.

The base Sport is a fairly good choice when compared to most other entry-level compact sedan and hatchback models. It is slightly more expensive than average, but offers slightly more features and includes that famous Mazda driving feel. It could be a good alternative to the more stingy mid-range models from some other manufacturers. But its luster pales pretty quickly in comparison with the amount of features that the Touring offers.

For roughly $2,000 for the Sedan model and $1,500 for the hatchback, you get a better interior, better engine, more safety features, and more convenience equipment. That is still well within the mid-range compact price point, while offering something close to the high-end of many competitors’ model ranges, making for a very impressive value compared to the base Sport.

Compare the Mazda 3 Touring vs Grand Touring Trims. What is the difference?

The Mazda 3 Grand Touring includes most of the high-end features that the Touring missed. It has a leather upholstery and LED headlights on top of the standard features of the Touring, and includes all of the components of the Bose/Moonroof/Satellite Radio Package. It also adds a heads-up display above the steering wheel that projects the current speed, navigation directions and, with the optional road-sign recognition equipment, information about upcoming road signs.

The optional equipment in question is part of the Premium Equipment Package for both the sedan and hatchback that also includes automatic high beams and steering-linked headlights, a navigation system, an auto-dimming rearview mirror, lane departure warning with lane keep assist, radar cruise control, and steering wheel-mounted paddle shifters for automatic transmission models. Like the rest of the models, it can also be equipped with the optional Appearance Package body kit.

While it is not quite the same impressive jump in equipment that the upgrade from the Sport to the Touring brings, the Grand Touring is still quite a nice investment in terms of features and equipment. The real leather is definitely an upgrade from the Touring’s synthetic material, and the brighter LED headlights also make driving a little safer.

The best value out of the Grand Touring comes with the Premium Equipment Package, as it fills out the Mazda 3 lineup with all of the active safety features and comes at quite a significant discount considering the equipment that it includes.

Drivers looking to get the most out of the money they spend on the Mazda 3 will certainly want the fully upgraded Grand Touring model. Without the optional Premium Equipment Package, the Touring is a slightly better deal unless you are especially interested in having genuine leather covering your seats. Then the Grand Touring is the way to go.

The better and more descriptive names for the various trim levels of the 2018 Mazda 3 would be Good, Better, and Best. The Mazda3 Sport is a solid option, featuring a decent value for its price that is on part with competitors around the same range.

The Touring is a solid upgrade in terms of comfort, technology, and safety, putting the Mazda 3 well ahead of the curve when it comes to the price and features balance. The fully-equipped Mazda3 Grand Touring is the best of the lot, though it may not see as many sales as the Touring due to its relatively high price point, though even a Grand Touring hatchback with all available packages stops shy of the $30,000 mark.

If all of the available features on the Mazda3 interest you and your budget allows it, the best value choice is the Grand Touring with the Premium Equipment Package. If that is a little too expensive, then the Touring model with or without the optional package is the second best.

The Sport model takes the last spot, but simply because of how good the other two Mazda 3 trims are. It is still a very good choice for the money.

Buying Tip: To avoid overpaying on a new car, shop prices online first. Get up front pricing before you walk into a dealership. We recommend the following free services; Car Clearance Deals, NADAguides, CarsDirect & Motortrend.
These free services will offer you the lowest prices and supply you with multiple competing price quotes. You will know the best price before you visit the dealer.
Save Money on a 2018 Mazda Mazda3:
Are you Shopping for a New Vehicle? Find the Best Deals with "Free - No Hassle" Prices Quotes.