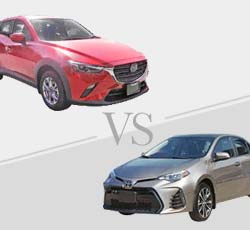 People still drive compact cars in the age of crossover vehicles. The Mazda3 and Toyota Corolla are two such compact vehicles that will surely duke it out on showrooms across the country. The two Japanese automakers each respectively produced exciting compact vehicles in 2019 in order to do one thing above all: provide options. Drivers have many needs within the vehicles being operated.

Safety, performance and drivability are all part of the equation when a consumer decides to purchase a vehicle. There are plenty of factors beyond that. Getting to know all aspects about a particular vehicle is a smart decision as an individual prepares for a purchase. These two compact cars from Mazda and Toyota give one plenty of reasons to get excited. It starts with looking under the hood.

Aesthetics matter, but sometimes the real brain of an operation rests under the beautiful shell of an automobile. The automaker out of Hiroshima offers two engine options within the 2019 Mazda3. One of two engines being offered in the Mazda3 uses compression along with a spark plug to ignite a combination of fuel mixture and air at the same time.

This engine will be the first featured in Mazda's subdued hybrid system. One will have the opportunity of driving a six-speed manual in the hatchback version while the sedan is equipped with a six-speed automatic transmission--the transmission calibration is flawless.

Front-wheel drive is the standard for the Mazda3, but 2019's version offers all-wheel drive for the first time in select models. An option as good as that adds an element of appeal for drivers who face snowy, icy, rainy and all sorts of other four-season driving conditions. The 2019 Corolla is a bit different from the Mazda3 when it comes to the powertrain.

Most trims of the car have a 4-cylinder 1.8 liter engine supported by a six-speed manual transmission or continuously variable automatic transmission. Unlike the Mazda3, the Corolla doesn't offer all-wheel drive; the engineers elected to go with a front-wheel drivetrain. Its fuel efficiency is similar to that of the Mazda3.

It gets 28 miles per gallon in the city and 36 on the highway. It comes with a full warranty for three years or 36,000 miles. This car is extremely reliable, but like the Mazda3, lacks a serious punch when it comes to acceleration. The sedan feels slow and its rear drum brakes make stopping feel inferior compared to the Mazda3. The 2019 model of the Toyota Corolla features six trim levels: L, LE, LE Eco, SE, XLE and XSE.

The Mazda3 not only compares quite well in terms of fuel economy with the Corolla (27 mpg city and 36 mpg highway), but feels more powerful. The engine in the Mazda3 isn't turbo-charged like some of its competitors, yet it will get a person going from a stop to 60 miles per hour in about seven seconds.

That's quite a bit faster than having to ride a bicycle to work. A person driving the 2019 Mazda3 may not be blown away by its acceleration. Even revving the engine towards the 6500-rpm redline doesn't seem to offer much of a push. Its acceleration competes in its class nonetheless.

Its acceleration is a bit more powerful than the Corolla's, but it isn't earth-shattering by any means. One gets quality for their investment despite all this. The warranty is exactly the same as the Corollas's.

A driver can appreciate the makers of his or her automobile paying attention to detail: fine-tuning the automobile in a way that makes a rider appreciate it, even if they don't know exactly what they can appreciate about it. This is what driving the Mazda3 feels like.

Perhaps what is most impressive about the Mazda3 isn't its fuel economy or all-wheel drive that comes standard, but its interior. It's clean and sophisticated. One would expect to see the interior found in the 2019 Mazda3 in a luxury vehicle, not one that starts out at $21,895.

A sign of a good interior is cohesion. One doesn't want their vehicle's knobs,speedometer and navigation system to be all over the place. Mazda3 gets it right with thoughtful design. Minute details set the completely redesigned 2019 Mazda3 apart from prior years. The engineers and designers of the 2019 Mazda3 have reflected carefully with this crafted work of art.

Which brings the conversation to the audio system. The stock six-speaker Bose system works like a charm. Clear, crisp and refined speakers make this audio system quite wonderful. The system was also designed to keep phone conversations over the system private with strategically placed speakers. The interior keeps outside noise to a minimal.

Everyone is concerned with comfort in a ride. Nobody wants to sit in traffic in general. Adding an uncomfortable seat in the mix makes it all the worse. Those interested in the Mazda3 can smile at how thoughtfully crafted the front seats of the vehicle are. Designed to be more comfortable while driving, the front seats don't disappoint.

Another change with the 2019 Mazda3 is the elimination of the multilink rear suspension. Instead they went with a torsion-beam axle, which seems awkward but works. The handle is fine on the vehicle with the steering ratio being slowed by design. The model comes with all-season tires that offer a firm, but steady ride.

The driver could throttle the engine and only get to 74 decibels. The ambiance is good in the Mazda3. The space in the rear will be pleasant for passengers in the backseat thanks to an additional inch in the vehicle's wheelbase. With a chic interior display and easy access knobs, the Mazda3 was designed with much thought.

The leather-covered steering wheel of the 2019 Corolla is comfortable as one easily drives the vehicle. Corolla's drive well. This is why they are one of the most popular compact cars in the world. The system is sensitive and quick to react: much more than the Mazda3's slower reaction time.

Toyota didn't binge on the interior of the 2019 Corolla. This doesn't matter, however, because the clean design works. The 8.0 inch touchscreen allows one to easily control the entertainment system and all of the other electronic works. Bluetooth connection makes the pairing of the phone and vehicle simple, but the smartphone integration isn't the greatest.

Technology is fairly average for the 2019 Toyota Corolla, but the voice control feature seems to work with remarkable ease. The audio isn't as crisp as that in the Mazda's. The screen resolution on the navigation system is very clear, but will have to be cleaned often due to the black surface keeping fingerprints visible.

Just like the Mazda3, the seats in the Corolla offer comfort. One has six options for manually adjusting his or her seat. There's no excuse for not being able to find the right position. The XSE seats are dressed in leather, with the front ones being heated. The driver can adjust their seat eight different ways.

There's not a lot of symmetry regarding room in the back. The sedan offers plenty of legroom, while the hatchback options feel a bit crowded. Road noise is minimal, and the overall interior is fine despite Toyota playing it fiscally safe with the design.

Safety is important for everybody. There would be no meetings or ball games to attend without safety. The Toyota Corolla puts a great deal of effort into providing the latest features in safety: making it feel chic and modern.

This why the National Highway Traffic Safety Administration gave a perfect five-star overall safety rating to the sedan versions of the 2019 Corolla;the Corolla received a Top Safety Pick designation from the Insurance Institute for Highway Safety, which ranked it the highest rating in crash tests.

Safety features differ by trim, but all 6 models come with a rearview camera. This feature is especially nice for avoiding hidden obstacles. Sedan models have a pre-collision system that aids the driver in avoiding pedestrians and lane departure alert capabilities with steering assist. The hatchback version features Toyota's latest in safety features, including advanced detection capabilities.

Like the Corolla, every trim of the Mazda3 comes with a rearview camera. The Insurance Institute for Highway Safety ranks the Mazda3 as Superior in Front Crash Prevention Results. There are plenty of safety features that allow the riders to feel safe:

There are plenty of airbags in the Mazda3. The passenger and driver each get an airbag, plus a front and rear head airbag and a front side airbag. The value of a car can be seen in a number of its functions.

A consumer wants to maximize their investment when it comes to a compact vehicle. They have options galore, and quality options at that. Look at the purchase prices of the various trims of the 2019 Mazda3 and Corolla.

The different trim options within the Corolla do make a difference, but more on that in a bit. The MSRP prices on the Corolla are nice, especially considering how reliable these vehicles are. A person can be driving their Corolla for several years, making the investment worth it.

The brightest appeal with the Corolla is its dependability. There is plenty of value within its modest pricing. Budget friendly and very reliable, what's not to like? There are trim options that stand apart in the 2019 Corolla.

The sedan version of the 2019 Corolla remains unchanged from the prior year. The excitement comes with the hatchback. For how drab the acceleration feels in the sedan, there is still fun in the hatchback; the engine is stronger in the hatchback versus sedan, and its features preview what the new generation Corolla will look like in the 2020 model.

One may pay a bit more for the hatchback version of the 2019 Corolla, but its specifications make it more colorful than the more boring sedan. One has to be mindful of costs outside of the purchase price; costs like fuel, auto insurance and maintenance add up. This makes the Mazda3 and Corolla more appealing.

Both compact vehicles are dependable, but which of these vehicles is better than the other? It depends on the buyer. Every driver has certain needs within a vehicle.

Both compact vehicles offer value. The Corolla is great option for the driver who wants a reliable vehicle they can depend on while still getting great value. The sedan has more interior space than the hatchback, but the hatchback offers new energy into the 2019 line.

The Mazda3 takes interior design to a new level with the 2019 look. Combine that with a refined engine and transmission, and it's easy to see why a person is drawn to the Mazda3. The look is beautiful on the redesigned model for 2019.

The frugal buyer has good options in both cars. Both do well on gas mileage, are easy to drive and are functional. Acceleration can be clumsy at times and space limited on certain trims, but those looking for vehicles that don't require these things really find deals in these compact cars.

Those looking for luxury may prefer the posh interior of the Mazda3 over the 2019 Corolla. Those looking for many years of reliability may prefer the Corolla. Both are safe and can be relied upon in several ways. These vehicle may not be the best for someone needing a lot of cargo space, but they are perfect for a ton of other purposes.
Did you find this article useful?
Please rate this page. Select a star rating from 1 to 5 below:

Save Money on a 2019 Mazda 3:
Find New Car Clearance Prices - Many Vehicles are Selling Below Dealer Invoice Prices.

Every dealer offers a secret price. Many prices are below invoice. Find yours here.
2019 Mazda3 Comparison Guides: