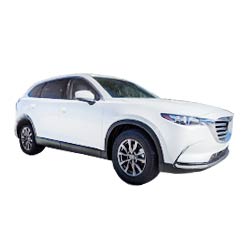 What 2020 Mazda CX-9 Trim Level Should you Buy? What is the Difference Between Trims?

With the CX-9, Mazda has become competitive with other companies making three-row SUVs. The CX-9 is the largest vehicle in Mazda's line-up, and it manages to be streamlined and agile as opposed to being weighed down with a bulky frame. The CX-9 has four different trims, with the top two trims definitely feeling like luxury vehicles. There are many high-quality elements in the basic trims as well, and they're offered for more affordable prices.

Compare the 2020 Mazda CX-9 Sport vs Touring Trim Levels. What is the difference?

Like the other trims, the CX-9 Sport is powered by a SKYACTIV-G four-cylinder, 2.5-liter engine. When regular 87 octane gasoline is used, torque is 310 pound-feet and horsepower is 227. These numbers can jump to 320 pound-feet and 250 horsepower when using 93 octane premium fuel. A six-speed automatic transmission is paired with the engine, and it includes a manual-shift and Sport mode that some drivers may appreciate. Towing capacity is 3,500 pounds, which makes the SUV capable of hauling trailers filled with a variety of gear.

With Mazda's i-ACTIV AWD system, the vehicle is monitoring so many things at once: the temperature; whether the driver is about to turn, brake, or accelerate; and whether any precipitation is falling. As needed, more power will be sent to the rear axle to prevent slippage. At other times, most of the power - if not all - will be sent to the front wheels since this is a more efficient way to drive. AWD has an Off-Road mode that optimizes traction and braking even more so that the SUV can make its way through rugged terrain.

When looking at the CX-9 Sport and Touring from the outside, the LED headlights and Daytime Running Lights jump out as attractive features. Those headlights can turn on and off automatically, and they can control their height depending on the angle that the vehicle is situated. This can be useful when something heavy is weighing down the cargo area, for example, and the front of the Mazda is tilted up as a result. Another automatic feature are the high beams, which will turn on whenever the road ahead is especially dark.

Other high-end features in the Sport and Touring are LED taillights and heated side mirrors. Those mirrors make it easier for others to see whether drivers are planning on turning because they come with LED turn signals. Both models have tinted windows to block out light and enhance privacy, dual exhaust outlets that look particularly sporty, and a roof spoiler in the back that has both form and function. They ride on the same 18-inch aluminum alloy wheels.

Similarities continue inside the cabin. For instance, both trims have a three-zone automatic climate control system, push-button start, and two 12-V power outlets as well as storage in the overhead console, front center console, and second-row center arm rest.

Upgrades in the Touring are that it has a power rear liftgate, illuminated visor vanity mirrors, and a rearview mirror that can automatically dim when it senses bright lights from another vehicle. With HomeLink technology, a button on the rearview mirror can act as a garage door opener. While the Sport has remote entry, the Touring has an advanced keyless entry, which lets people keep keys securely stored in their pockets or bags. All they have to do is walk up to their locked CX-9 and touch the door handle to unlock the vehicle. After turning off the engine and exiting the vehicle, the same touch on the door handle is all it takes to lock the car.

The Sport comes standard with seven-passenger seating, having a 60/40 split-bench in the middle row and a 50/50 split-bench in the third row. The front seats are heated, and the driver's seat is power-operated with power lumbar support. All seats are trimmed in cloth, and the steering wheel and shift knob are wrapped in leather.

In contrast, the Touring can come with captain's chairs in the middle row, which brings capacity down to six. The Touring has leather-trimmed seats in the front and middle rows, a power-operated front passenger seat, and a second row that comes with a power tilt-and-slide function for quicker access to the third row.

Technology is a strong point with the CX-9. The Sport has a seven-inch touchscreen, HD Radio, Bluetooth, and Pandora internet radio integration. The system is easy to use and quick to respond to the touch. It gets an upgrade in the Touring with a nine-inch touchscreen, Apple CarPlay, Android Auto, and voice commands. With either trim, certain controls for the audio system and phone are mounted on the steering wheel.

In the safety department, the CX-9 also does very well. The Sport and Touring trims have been built with rearview cameras, Hill Launch Assist, and Mazda Radar Cruise Control with Stop & Go. This advanced system can monitor changes in traffic and adjust speed accordingly. It can even bring the vehicle to a stop if traffic is especially busy.

Driver-assist features that are standard on both trims include blind spot monitoring and smart city brake support, which acts as a type of automatic emergency braking. Blind spot monitoring includes the ability to monitor traffic behind the CX-9 as it's backing up. Other features are pedestrian detection, which can give drivers a lot of peace of mind, as well as lane-keep assist and lane departure warning, which work together to prevent accidents related to drifting out of one's lane. All of these components can give people confidence as they head out on roads where anything could happen.

Compare the 2020 Mazda CX-9 Touring vs Grand Touring Trims. What is the difference?

Both on the exterior and interior of the CX-9, the Grand Touring offers more advanced features than the Touring. Its headlights can not only automatically level themselves, but they can also turn in the direction that the SUV is headed. This feature is called adaptive front lighting, and it can help people see around the bends on dark, curvy roads.

The Grand Touring has the addition of LED fog lights, a windshield wiper de-icer, and chrome body molding. If anyone anticipates needed to store cargo on the roof, the Grand Touring comes standard with aluminum roof rails that are finished in a satin chrome.

Moving to the inside of the vehicle, the biggest difference is that the Grand Touring has a power moonroof. It can be opened with just one touch of a button, and the amount of light it lets in can really change the atmosphere in the cabin. A sunshade is included for those warm days when the sun would heat things up too much.

The Grand Touring also has a frameless rearview mirror that looks more modern than the traditional style, LED accent lighting in various places around the cabin, retractable sunshades on the second-row windows, and a sleek aluminum trim. An upgrade to the Touring's power liftgate is that the Grand Touring has a hands-free model. Someone just has to kick underneath the sensor in order to make the gate open up on its own.

Like the Touring, the Grand Touring can either be equipped with second-row captain's chairs or a bench with room for three. The driver's seat can memorize two favorite positions, and the front seats are ventilated in addition to being heated. More heating elements are found in the steering wheel and second row outboard seating positions.

The major upgrade to the infotainment system is navigation. The Grand Touring comes with built-in navigation and access to current traffic, weather, sports news, and fuel prices. It also comes with SiriusXM Satellite Radio. Rather than broadcasting the audio through six speakers, which is what the Touring has, the Grand Touring uses 12 speakers as part of a Bose Centerpoint 2 Surround Sound System.

A noticeable change in how information is displayed to the driver is the Active Driving Display. This system projects key information onto the windshield behind the steering wheel, right in the driver's line of sight. Since the vehicle can recognize traffic signs, the information would include changes in the speed limit.

What's different about the Grand Touring in terms of safety is that it can help drivers be more aware of potential obstacles as they're parking or making tight maneuvers. The Grand Touring comes with a 360-degree view monitor and parking sensors in both the front and rear. Using these features can reduce the likelihood of getting scrapes or dents when parking.

Compare the 2020 Mazda CX-9 Grand Touring vs Signature Trims. What is the difference?

It's important to note that the Signature trim is only offered as an AWD model. Some people might not need AWD, but with the Signature, they'll be stuck with it. This is something to consider since in all of the other trims, FWD versions are almost $2,000 cheaper than their AWD counterparts.

Inside the cabin is where it's clear that the Signature is a top-of-the-line trim. It has genuine Santos Rosewood inlays on the door switchgear area and around the gear shifter. It has a center console between the captain's chairs, which are standard in the middle row. Rather than using regular leather for the seats, the Signature has a higher-quality Nappa leather. As a full grain leather, Nappa is softer than regular leather, and it looks and feels more sophisticated.

Both trims have the full suite of driver-assist features that are included in the Touring. Like the other trims, they have Dynamic Stability Control, three-point seatbelts for all positions, and a full array of air bags.

With the CX-9, there's not really a wrong choice. The Sport has many attractive features, all trims run on a powerful engine, and the vehicle's cabin feels spacious and comfortable. Since the Signature is priced higher than the rest of the trims, that's the only trim that might not be very practical for most consumers.

If someone has the budget to afford a CX-9 Grand Touring, than that would be a recommended choice. On first glance, the Grand Touring looks upscale, with its chrome accents and roof rails. Inside, the leather is comfortable and soft, navigation is included with the infotainment system, and the 360-degree view can prove to be very helpful in tight spots. The moonroof can be enjoyed by everyone who likes the feel of the sun warming them up and the fresh air flowing through their vehicles.

For those on a more limited budget, the Touring is a great option. Leather seats, power-operated front seats, and a power liftgate are all nice amenities to have. The nine-inch touchscreen is a considerable upgrade over the seven-inch version, and many people prefer to have Apple CarPlay and Android Auto built into their infotainment systems for seamless smartphone connectivity.

Save Money on a 2020 Mazda CX-9:
Find New Car Clearance Prices - Many Vehicles are Selling Below Dealer Invoice Prices.