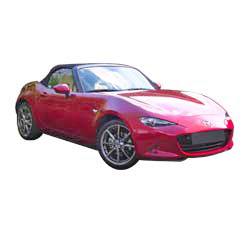 Should You Buy a 2020 Mazda Miata? Here Are Some Reasons For and Against

As a sports car, the 2020 Mazda Miata fits the bill. It's fun and stylish, and it handles itself well. It's important to note that the Miata is a two-seater, so anyone interested in practicality and spaciousness should look elsewhere. What the Miata does offer is excitement, and anyone wanting to have a good time behind the wheel should check out this car.

There are three trims of the Miata, starting with the Sport. The Club is a nice option for those who want a little more than the standard version but don't necessarily want the most premium trim, which is the Grand Touring. It should be pointed out that the jump between the Sport and Club is bigger than the jump between the Club and Grand Touring. This holds true both in terms of pricing and the quality and number of included features. If any prospective customer is concerned about budget, this fact should be taken into consideration.

With this model year, Mazda has installed many standard driver-assist features on the Miata. Now, drivers can benefit from having automatic emergency braking and other systems that can alert people to potential problems and possibly take corrective action, only if needed.

Some other updates have been made to the 2020 Mazda Miata. The key fob and badging have ben slightly tweaked, and there are a few different exterior paint colors to choose from. Many people will appreciate that smartphone integration has become a standard component in the Club and Grand Touring trims.

1. Choose From a Manual or Automatic Transmission

The 2020 Mazda Miata can come as either a manual or automatic vehicle. Some enthusiasts will really appreciate this choice, as it's hard to match what it's like to drive a stick shift.

With 181 horsepower, the Miata is a peppy little vehicle. It runs on a 2.0-liter, four-cylinder engine, with variable valve timing, and it comes with 151 pound-feet of torque. Since the Miata isn't a particularly heavy vehicle, this amount of horsepower and torque results in a great experience. The car is responsive and quick to accelerate, and anyone who prioritizes performance will be happy with this model.

4. Cabin is Similar to a Cockpit

Sitting in the driver's or front passenger's seat can give people the feeling like they're in a jet or luxury sports car. Everything is close by, within easy reach. There's no fancy digital instrumentation on the Miata, but that actually works to the Miata's benefit in a way. Much like one would expect an airplane to have the traditional gauges, the Miata features some traditional components, to include black gauges and white lettering.

The 2020 Mazda Miata comes with many driver-assist systems. A rearview camera is standard to make it easier for people to see behind their cars when backing up. Lane Departure Warning alerts people when they start to drift out of their lanes, without having turned on their turn signals first. Blind Spot Monitoring and Rear Cross Traffic Alert are both helpful in keeping an eye on other vehicles that are difficult to see.

Further, Smart City Brake Support can be key in certain situations. It works when the car is driving in low-speed conditions, and it can detect the presence of other vehicles. When it seems like the Miata is approaching another vehicle in an unsafe manner, the car will sound an alert. If the driver doesn't brake in time and a frontal collision seems imminent, pressure will be applied to the brakes to hopefully prevent an accident from occurring.

Apple CarPlay and Android Auto are two technology systems that many people are looking for. It makes it much easier to access one's contacts, favorite songs, and select apps from the Miata's infotainment system. Instead of having to learn another interface, one simply has to sync his or her smartphone to the vehicle, and the screen on the infotainment system will be quite similar to that of the smartphone.

The suspension on the Club and Grand Touring trims of the 2020 Miata offers a smooth ride. It's a four-wheel independent system, with a double wishbone configuration in the front and a multi-link system in the back. Monotube dampers are found in both the front and the back.

With LED lights in the headlights and taillights, the Mazda Miata can make a great impression and comes across as a modern, youthful vehicle. The top two trims also come with LED Daytime Running Lights to help other people see the Miata more clearly. On the Grand Touring, there are automatic high beams and an adaptive front-lighting system that can make adjustments to the angle and direction of the headlights. When the Miata is turning or going over uneven terrain, adaptive front lights can make a difference in how well one can see the road ahead.

What's interesting about the LED headlights are that they have a parabolic design. This lets them fit well into the aerodynamic body. In the back, the circular taillights have a more classic look.

The roof of the Mazda Miata is a soft top, which can be black or gray. With just a touch of the button, that top can be lowered and stowed neatly away. This gives the driver and passenger a true, open-air experience. This is a primary reason why many people consider the Miata in the first place.

When parking the car or preparing for adverse weather, the Miata can just as easily be closed up. An assist spring mechanism pushes the top back onto the Miata, and everything clicks into place on its own.

The Grand Touring trim of the Mazda Miata is packed with features that are likely to be appreciated. Leather is found on the seats, shift knob, steering wheel, and parking brake handle, and the seats have three different heat settings. Those same features are inlaced on the Club trim, except the Club has cloth-trimmed seats rather than leather ones.

In addition, the Club and Grand Touring trims have a Bose sound system that comes with nine speakers. AudioPilot technology and a subwoofer enhance the audio quality. On the Grand Touring, the infotainment system has the addition of navigation for convenience.

It's not a surprise that the Miata isn't the largest vehicle out there. When the Miata is referred to as a compact vehicle, the word "compact" can't be emphasized enough. It only has two seats, and the trunk has 4.59 cubic feet of space. This is hardly enough for a long road trip, but it should be fine for running errands around town or going on overnight getaways.

2. Not Great For Bumpy Roads

The suspension is a quality one, but it's not designed to handle rough terrain. If the Miata ever travels on anything that's not smooth pavement, expect to feel the bumps. Fortunately, most people aren't interested in the Miata because of its ruggedness, so this probably won't be a major issue.

In the Miata's cabin, the engine noise is clearly heard. This can add to the thrill of driving a sports car, but it can also get a little old at times. It's something to pay attention to when on a test drive.

Not only does the Miata have a small trunk, but it also is lacking in interior storage compartments. This can make it hard to keep items organized and out of the way.

The Dodge Challenger and Chevy Camaro are two compact sports cars that have some similarities to the Mazda Miata. All of these models are athletic and compact, and they'd appeal to the same type of buyer. Where the Miata outshines these other vehicles is in style. In many ways, it's more refined and elegant than these competitors, with soft curves and a streamlined appearance. Another way in which the Miata distinguishes itself from the others is that it has more standard driver-assist features. Rather than making emergency braking optional, Mazda has built that into all trims of the Miata.

In the compact sports car market, there is some competition. However, the Miata rises above the rest because of its affordability, performance, technology, and safety features. It's definitely a car to consider if one is trying to find a reliable yet exciting vehicle to drive. Being a soft-top convertible sets it apart from many others and gives the Mazda Miata even more appeal.


Save Money on a 2020 Mazda Miata:
Are you Shopping for a New Vehicle? Find the Best Deals with "Free - No Hassle" Prices Quotes.