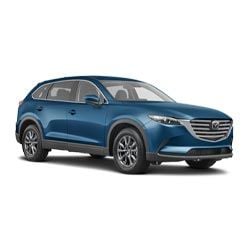 What 2021 Mazda CX-9 Trim Level Should you Buy? What is the Difference Between Trims?

Three-row SUVs have all but replaced minivans when it comes to being the ultimate family vehicle. They often offer as much space but in a more capable and attractive package. As a result, there are plenty of choices for those shopping in this segment of the market.

Mazda is a brand with a reputation for creating sophisticated and high-performing vehicles. Their entry into the three-row SUV world, the CX-9, lives up to this reputation. It manages to be fun to drive, which is a fairly rare accomplishment for a vehicle of this size. Plus, the cabin is nice enough to rival some luxury brands.

There are five different trim levels for drivers to take a look at when considering a 2021 Mazda CX-9. The entry-level Sport offers a decent value, although drivers may find that they need to look higher on the trim ladder to get everything they need. In 2021, a uniquely-styled Carbon Edition trim level premieres.

Considering there are more options than ever, drivers will want to make sure they are familiar with all that the five trims can offer. The following guide can help by highlighting both what is the same and what is different throughout the line.


Compare the 2021 Mazda CX-9 Sport vs Touring Trim Levels. What is the Difference?

Unlike many other midsize SUVs who go straight to a V6 engine, the 2021 Mazda CX-9 uses a turbo 2.5L four-cylinder engine instead. This is true of the Sport trim as well as the rest of the lineup. This engine can make 250-horsepower and 320 lb-ft of torque, but only if you fill up with premium gas. Otherwise, it makes 227-horsepower and 310 lb-ft of torque. The six-speed automatic transmission found underneath the hood of the Sport trim is also standard for the entire line.

Front-wheel drive is the normal setup for the Sport but all-wheel drive with off-road traction assist is also an option. When sticking with front-wheel drive, the CX-9 Sport will get you 22mpg in the city and 28mpg on the highway. All-wheel-drive models of the SUV will get 20mgp city and 26mpg highway.

The standard wheel size for the entry-level trim is 18-inches. When it comes to styling touches, exterior features include a body-color rear roof spoiler and dual exhaust outlets. There are plenty of useful features found on the outside of the CX-9 Sport as well, including heated side mirrors with integrated turn signals and rain-sensing windshield wipers.

LED lighting is standard on the outside of the Sport. This includes LED headlights, combination taillights, and daytime running lights. The headlights have an auto on/off feature along with an auto-leveling feature. Automatic high beam control is thrown in to sweeten the deal further.

Inside, there is room for seven. The driver gets six-way power-adjustment but the front passenger only gets a four-way manually-adjustable seat. For the entry-level trim, the seats are cloth. However, the Sport's interior gets a splash of sophistication with a leather-wrapped steering wheel and shifter knob. Also standard for this entry-level model are comfy heated front seats.

A variety of convenience features are found in the Sport. Highlights include push-button start, tri-zone automatic climate control, and remote keyless entry. A beautiful 10.25-inch touchscreen sits in the center of the infotainment setup. It gives you Android Auto and Apple CarPlay, as well as access to Mazda Connected Services.

There is a six-speaker audio system and HD radio found inside the Sport trim. Also included is an auxiliary jack as well as two USB ports. Rounding out the handy tech features are steering-wheel-mounted audio controls so that you can keep your hands on the wheel while controlling your music.

A 4.6-inch LCD meter display is located on the dashboard of the entry-level Sport. This is where you will get information like the ambient temperature and the trip computer. It also displays the fuel gauge and odometer in a way that is easy to read at a glance.

The Sport trim comes standard with i-Activsense, a suite of high-tech safety features. It includes both lane-keeping assist and lane departure warning. This entry-level trim also has some of the more advanced ones, such as adaptive cruise control and a blind-spot monitor with rear cross-traffic alert. Finally, Mazda includes what they call Smart City Brake Support, which works like the automatic emergency braking found on other vehicles.

As for the Touring trim, the first thing you should know is that it unlocks two more premium paint colors, known as Soul Red Crystal and Sonic Silver. The only noteworthy exterior feature involves the liftgate, which gains power and programmable height adjustment. Otherwise, the Touring is the same on the exterior as well as underneath the hood when compared to the Sport.

Inside, this trim has optional second-row captain's chairs, which reduces seating capacity to six. It also adds an auto-dimming rearview mirror with a universal garage door opener. The front passenger gets a major upgrade in the form of six-way power-adjustment for their seat as well. While the Sport trim was only available in black cloth, the Touring can be had with either black or tan leather.

As far as tech goes, the Touring adds two extra USB ports in the second-row. Otherwise, there are no standard upgrades. Ths same is true of advanced driver assistance technology.

Optional for the Touring trim are many of the upgrades found on the next level, such as wireless device charging and USB ports for the third-row. These features are part of the Premium package. It costs a little over two grand, making the Touring with its Premium package still significantly less expensive than the next trim. No other trim levels have packages or add-ons beyond all-wheel drive or second-row captain's chairs.

Compare the 2021 Mazda CX-9 Touring vs Carbon Edition Trim. What is the Difference?

The Carbon Edition is only available in Polymetal Gray Metallic when it comes to its paint job. Wheel size jumps up to 20-inches when you choose this model. This trim level also adds roof rails with a sophisticated chrome finish. While the first two trims had black body moldings, the Carbon Edition uses more chrome. There are also many gloss black accents to be found here, such as on the side mirrors and the wheels.

Convenience features are added for the exterior of this model. The side mirrors gain a handy power-folding feature and there is a windshield wiper de-icer. Exterior illumination also gets far more impressive, with the Carbon Edition getting LED fog lights as well as a fancy adaptive front-lighting system.

This model comes exclusively with the second-row captain's chairs and with a red leather interior. The auto-dimming rearview mirror is frameless and there is an overhead LED lighting package to give the cabin a high-tech feel. For a more athletic experience behind the wheel, the Carbon Edition adds paddle shirts.

Mazda does not stop there. This fancy new trim level also comes standard with a power moonroof and retractable window shades for the second-row. These little touches can make the CX-9 much more pleasant to ride in for the family.

For the driver, the Carbon Edition jumps up to eight-way rather than six-way power-adjustment. The second-row of seats gain heat, while the front row adds ventilation. Even the steering wheel gets heated in this upscale model. The 4.6-inch LCD driver display found in the Sport and Touring models gets upgraded to 7-inches for the Carbon Edition.

Optional tech features for the Touring become standard equipment for the Carbon Edition. This includes wireless charging, navigation, and satellite radio. This model also gets a significant upgrade in the sound system, going up to a 12-speaker setup from Bose. The third-row passengers get some attention with the addition of two USB ports back there.

There are three significant safety upgrades for this trim. The first is a driver attention alert, which monitors your patterns behind the wheel and watches for signs of distracted driving. The second is Reverse Smart City Braking. Finally, the Carbon Edition adds both front and rear parking sensors.

Compare the 2021 Mazda CX-9 Carbon Edition vs Grand Touring Trim. What is the Difference?

On the outside, these two trims are very similar. Rather than the black 20-inch wheels, this model goes with a silver finish. The Grand Touring does go back to offering the same paint colors as the Touring did, however. The Grand Touring is also mechanically identical to the models that came before it.

The power liftgate does gain the hands-free function for the Grand Touring. Inside of the cabin, the second-row captain's chairs go back to being optional rather than standard. The Grand Touring loses the red leather and some of the black interior accents but keeps the other upgrades added by the Carbon Edition.

Technology features for your entertainment do not change. The Grand Touring does get some safety-enhancing features, however. This model comes with traffic sign recognition while also upgrading the rearview camera to a 360-degree setup.

The Carbon Edition and Grand Touring models are really quite similar. They actually are separated by less than a thousand dollars when comparing prices. Ultimately, style preferences may be how buyers decide between these two.

Compare the 2021 Mazda CX-9 Grand Touring vs Signature Trim Level. What is the Difference?

At the very top of the trim ladder is the Signature. The engine and transmission stay the same but all-wheel drive does become standard here. This model can easily be spotted with exterior upgrades like LED grille accent lighting and its exclusive Signature AWD badging. Interestingly, this trim loses two paint options that are available for the Touring and Grand Touring. It cannot be had in Sonic Silver or Deep Blue Metallic.

Inside, Mazda makes it obvious that the Signature is the luxury version of the CX-9. While other models have leather, this trim-topper gets Nappa leather with quilted seat accents for the first two rows. There are also rosewood inlays found throughout the cabin. Second-row captain's chairs once again become standard for the Signature trim.

Otherwise, this trim level is identical to the Grand Touring. It is significantly more expensive, however. While this is somewhat justified by the standard AWD, buyers will have to decide for themselves in the more luxurious cabin is worth all the extra money.

For the majority of buyers, the entry-level and trim-topping options are worth skipping. The right choice will fall somewhere in the middle instead. To get things like leather upholstery and a power-liftgate, for example, you only have to step up to the Touring trim.

The Carbon Edition makes some impressive upgrades and definitely has the most eye-catching look for the CX-9, making this a smart buy in some cases. As for the Grand Touring, it will add on a few significant safety features, possibly giving it the edge for families. Unless you have your heart set on things like wood inlays and extra fancy seats, skip the Signature model.

For most buyers, the Touring trim is high enough on the list to have all of the features that they need. To get the most possible out of the 2021 Mazda CX-9 Touring, consider adding its Premium package.