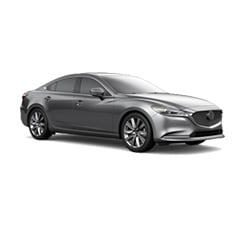 What 2021 Mazda6 Trim Level Should you Buy? What is the Difference Between Trims?

The Mazda6 is classy and elegant. Despite how upscale it looks and feels, it has a reasonable price tag. Its value, along with the sedan's size and strength, makes the Mazda6 a great buy.

For the 2021 model year, the Mazda6 has been updated with a brand new trim. The Carbon Edition is now available, and it takes style to a different level with a dark color scheme and red leather seats. In addition, the Mazda6 has been given Apple CarPlay and Android Auto as standard components. This is sure to bring some extra attention to the car, given how much people rely on their smartphones these days.

As a mid-size sedan, the Mazda6 feels fairly spacious. In the front, there is 42.2 inches of leg room, and in the second row, there is 38.7 inches of leg room. The trunk has a volume of nearly 15 cubic feet, and this helps to make the car more practical.

Mazda gives its customers six trims to choose from. There's a good range of price points, starting with the Sport that costs approximately $24,000 and ending with the Signature, which tops things off at around $36,000.

Compare the 2021 Mazda6 Sport vs Touring Trim Levels. What is the difference?

These two trims are similar in many ways. For starters, they both have the same type of engine. It's a 2.5-liter engine with four cylinders, and it can output 187 horsepower. Though all-wheel drive is not offered with the Mazda6, the car does have several systems that are designed to enhance stability and control.

Mazda has set up this sedan with a six-speed automatic transmission. Sport mode is an option for anyone who wants to drive a bit more aggressively on occasion. These two trims do fairly well in terms of fuel economy. They can earn up to 35 miles per gallon on the highway and 26 miles per gallon in the city.

The differences between the Sport and Touring are mostly found inside their cabins. The Sport has a remote keyless entry system, which has been a standard in the industry for many years. In contrast, the Touring has an advanced keyless entry system. Its key fob can stay secured and tucked away while the driver just has to touch a sensor on the door handle to unlock it. Also, the Touring has a power moonroof to bring in more natural light.

The Touring has the addition of rear seat vents to make things more comfortable for passengers. The Touring also has heated front seats, which can be a key feature for people who like to stay cozier in the winter. Some people may prefer the leatherette seats of the Touring to the cloth ones in the Sport, and the Touring is upgraded with a power-adjustable driver's seat that can be moved in six ways. The Touring's seats can be black or sand, whereas the seats in the Sport are exclusively available in black.

There's plenty of good news when it comes to the 2021 Mazda6. Standard across all trim levels is an eight-inch touchscreen. It comes with smartphone compatibility and Bluetooth, and it's connected to six speakers. Technology is a major reason why the Mazda6 is known for being safe. The car comes standard with various monitoring and mitigation systems to prevent certain types of accidents from occurring. Blind spot monitoring, automated emergency braking with pedestrian detection, and lane-keep assist are some of the components in the standard safety package.

On the exterior of the car, there are LEDs in the headlights, taillights, and daytime running lights. The headlights can even adjust their level to better light up the road. Turn signals have been integrated into the side mirrors to help other drivers stay aware of someone's intentions. One thing that may be noticeable is that the Touring has 19-inch wheels, in comparison with the Sport's 17-inch wheels.

Compare the 2021 Mazda6 Touring vs Grand Touring Trims. What is the difference?

The Grand Touring's biggest enhancement is that it has a turbocharged engine. This takes horsepower up from 187 to 227 and increases torque from 186 pound-feet to 310 pound-feet. With premium fuel, the engine could even generate more power. This is a significant jump in capability, and it's enough of a difference for some people to immediately know that they prefer the Grand Touring or one of the higher trims with a turbo engine.

Now, there is a slight drop in fuel economy when moving to the Grand Touring. It can earn up to 31 miles per gallon on the highway and 23 miles per gallon in the city. This is still a respectable amount of fuel efficiency, but it's something to keep in mind.

Some more differences are noticeable when examining the inside of the Touring and Grand Touring. First, the Grand Touring has a high-tech rearview mirror. It has HomeLink technology so it can serve as garage door opener, and it can automatically dim if bright lights are detected. (The exterior side mirror on the driver's side also has this auto-dimming function.) The sound system on the Grand Touring uses 11 Bose speakers to enhance the audio quality, and the addition of SiriusXM is going to appreciated by many. Finally, Apple CarPlay starts to have a wireless connection at this level.

In many ways, the Grand Touring Reserve feels more luxurious than the Grand Touring. This is largely thanks to its leather upholstery and the fact that both front seats are power-adjustable. The driver's seat can move in eight ways and has power lumbar support, and the front passenger's seat can move in six ways. Not only are those front seats heated, but they're also ventilated to make things feel more refreshing on hot days.

Another amenity is that the driver's seat has a memory function. With this feature, drivers can simply push a button to put everything in place rather than having to fiddle around with various buttons and levers. People will enjoy the heated steering wheel in the Grand Touring Reserve, especially when the weather is chilly.

The technology is mostly the same in these two trims. However, the Grand Touring Reserve has an Active Driving Display. This shows the driver key information, in a subtle yet easy-to-read manner. The information is projected onto the windshield so that the driver can keep looking straight ahead while gathering this information.

The Grand Touring Reserve has a slightly different look from the Grand Touring. This is because it has signature LED headlights that seem more modern and cutting edge. The front lights can adjust their level and angle depending on what direction the car is traveling in, and there's a de-icer built into the front wiper. The side mirrors can automatically fold in, which is simply a cool feature. Other enhancements are a special front lower molding and rear spoiler. Are these two things necessary? No, but they are fun features that contribute to the aesthetic of this trim.

Compare the 2021 Mazda6 Grand Touring Reserve vs Carbon Edition. What is the difference?

A unique option would be the Carbon Edition. Its stand-out features are related to its style. It's important to note that this trim is only offered with a Polymetal Gray Metallic exterior paint color. Matching this dark color are black wheels and a black rear spoiler.

Giving the cabin of the Carbon Edition a sharp appearance are red leather seats. This deep red color was a bold choice, and it makes this trim feel edgy and sporty. One could easily imagine this car being on a race track.

Compare the 2021 Mazda6 Carbon Edition vs Signature Trim Level. What is the difference?

With the Signature trim, Mazda has given its customers a truly sophisticated sedan. This car doesn't have regular leather seats; it has Nappa leather, which is widely regarded as being more the more upscale material. It's a full-grain leather that's soft and supportive. Plus, it's durable, so it can live up to long-term use. The Nappa leather seats can be a parchment color or a deep chestnut. (In other words, they can be a light tan or a dark brown.)

Elsewhere in the cabin, there are LEDs to give the cabin an elegant atmosphere. There are LED map lights in both the front and back of the cabin, and there is an LED in the glove compartment as well as one in the trunk. Complementing all of these high-end features is a sleek black headliner. The door and dash have Sen Wood and Ultrasuede inserts.

A major bonus of getting the Signature is that it has integrated navigation. It's the only trim to offer this advanced program. With navigation, getting turn-by-turn directions is simple and easy. Those direction can take traffic into account, and drivers can continue to be updated regarding travel conditions, weather, sports news, fuel prices, and more, thanks to SiriusXM Traffic and Travel Link.

There are two other technological enhancements in the Signature. It has a seven-inch LED meter display, and it has a traffic sign recognition system to help people stay aware of any special rules they should be following.

The average consumer is going to have to factor price into his or her decision-making process. While the Mazda6 is competitively priced, there's no question that the lower trims are more reasonable than the higher trims, at least in terms of budget. The Sport and Touring are priced under $30,000, where as the others cost more than that threshold. As mentioned at the beginning of the overview, the Touring costs more than $35,000.

A difference of almost $10,000 between the highest and lowest Mazda6 trims simply can't be ignored. For this reason, the Signature can't be in contention for being the most highly recommended trim. Likewise, the Carbon Edition's upgrades seem more expensive than the actually should be.

When comparing the first four trims with each other, the biggest thing that immediately stands out is the fact that the first two trims don't have turbocharged engines. While it's great that they have smartphone compatibility and driver-assist systems, they just don't offer the same level of excitement as the turbocharged models do.