2014 Mercedes E-Class Pros vs Cons. Should You Buy? 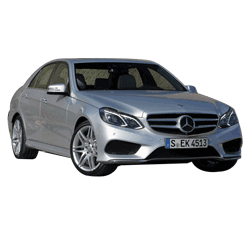 The 2014 Mercedes-Benz E-Class Gets a Powerful Makeover
The 2014 Mercedes-Benz E-Class has recently undergone a major facelift, and things are looking good from all angles. The front ends have been enhanced both the hood, and the engine underneath, topped off by an aggressively restyled grille and headlamp arrangement. The E-Class has some mighty competition from automakers like Audo, BMW, Lexus, and Cadillac, but as always, Mercedes-Benz finds ways to stand out from the rest.

The 2014 E-Class sedans feature an overhauled engine lineup that offers a wide range of options in terms of power and efficiency. The base 2014 Mercedes-Benz E300 engine is the 248-horsepower, naturally aspirated, direct-injection 3.5L V-6. The E350 gets the same V-6, but includes additional performance tuning that revs it up to 302 horsepower.

The four-door E550, available exclusively as all-wheel drive (other models are available in all-wheel or rea-wheel) has retained its 402-horsepower, twin-turbo, 4.7L V-8 engine. Then there’s the E63 AMG and the E64 AMG Wagon, which has received the most under-the-hood updates out of its E-Class companions, which features a 550-horsepower, twin-turbo, 5.5L V-8 beast capable of sending 531 lb.-ft. of torque to the wheels.

The fuel economy varies widely between the various E-Class models and their respective power plants, giving buyers a range of options when it comes to tradeoffs between power and economy. The best economy can be found in the E250 BlueTEC’s 28 city / 45 highway mpg rating, followed closely by the E350’s rating of 21 city / 30 highway. While the fuel economy drops off as the engines get larger, it’s a necessary sacrifice for the higher power output.

The steering and suspension systems of the E-Class sedans have been dramatically improved over previous models. Luxury cars are generally typified by numb steering and soft suspensions, but Mercedes-Benz has retuned the new E-Class. A slightly stiffened suspension helps to limit the body roll of the large sedans and distribute the weight in such a way as to keep it firmly in control even when tested with difficult maneuvers.

The 2014 Mercedes-Benz E-Class is packed with leading-edge safety systems that help keep the car and its occupants out of harm’s way. Every model includes standard features like Attention Assist to alert drivers if they show signs of distraction or drowsiness. A wealth of optional systems includes Distronic Plus radar-based adaptive cruise control with Steering Assist and enhanced braking capabilities, Active Blind Spot Assist, Active Lane Keeping Assist, and the Parktronic automatic and assisted parking system.

Every aspect of the Mercedes-Benz E-Class line is engineered with safety in mind, beginning with an abundance of high-grade steel in the body panels, a rigid body structure, and an advanced front crumple zone with a design based on hundreds of crash tests and thousands of simulations. The E-Class also features an intelligent system of nine air bags the deploy to provide 11-way protection inside the vehicle. Even if the worst should happen, owners can rest assured that their 2014 Mercedes-Benz E-Class sedan will protect everyone in the vehicle.

The E250 and E350 come in either standard, sport, or luxury styling, with sport styling also available for the E400 and E550. Covering both exterior and interior aspects of the car, the style options enhance the sculpting of the exterior design and change the looks and materials used in the cabin. Whether an owner wants a bold, aggressive look or prefers a sophisticated, luxurious appearance, the E-Class can deliver.

The interior of the 2014 Mercedes-Benz E-Class remains a well-appointed masterpiece of luxury cabin design. With the line’s new makeover came a redesigned center console and an improved steering wheel. In addition, all E-Class sedans come with standard Nappa leather upholstery, as well as heated and active ventilated front seats. New trims enhance the interior further, creating an even richer atmosphere than previous designs.

As one would expect, E-Class sedans are filled with features that make life more convenient and comfortable. The Keyless-Go system allows owners to access and start the car using only touch, rain-sensing windshield wipers automatically adjust their own intermittent frequency depending upon the intensity of the rainfall, and the rear window features an available power sunshade. Other available features, like the Adaptive Highbeam Assist and the rear view camera, help to enhance the safety and convenience of the class even further.

With 15.9 cubic feet of cargo space, the 2014 Mercedes-Benz E-Class can stow a bit more cargo than the typical luxury sedan. While that number drops by a few cubic feet in the convertible and coupe models, it goes up to 29 cubic feet in the E-Class wagon. Even better, the folding rear seats can expand the wagon’s available capacity to 57.4 cubic feet.

The 2014 Mercedes-Benz E-Class offers everything that one could want in a luxury sedan, but there are a few areas where some potential E-Class owners will like the competition a bit better.

There’s simply so much technology packed into the COMAND infotainment center that many owners feel as though it’s a bit more complicated than it needs to be. When compared with the infotainment systems found in competing automobiles, it feels less straightforward and intuitive than that of the 2014 Infiniti M.

Some critics were disappointed to see that the interior of the E-Class did not receive as many updates as the rest of the car during its recent overhaul. While the interior of previous E-Class automobiles was superb in its own right, they question when the E-Class will receive another significant cabin update. Compared with models that have recently retooled and improved their own cabins, such as the 2014 Cadillac CTS, the 2014 Mercedes-Benz E-Class may feel slightly dated.

On the wish list of cabin improvements is a reduced level of noise and vibration inside the car. This issue was not entirely addressed in the redesign, and many critics would like to see Mercedes-Benz include enhanced soundproofing in a future interior updates. Competing models like the 2014 Audi A6 have more significant ride-quieting features.

Overall, the 2014 Mercedes-Benz E-Class sedans are among the very best luxury sedans on the market. While critics have pointed out a few areas that could use minor improvements, the overall level of performance, technology, and safety found in the E-Class sedans is well above that found in most other cars. With the 2014 E-Class, Mercedes-Benz has once again exceeded the exceptionally high standards placed on the large luxury auto market.