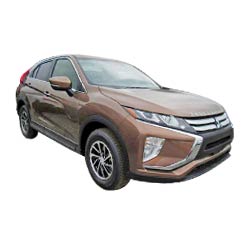 What 2020 Mitsubishi Eclipse Cross Trim Level Should you Buy? What is the Difference Between Trims?

The Mitsubishi Eclipse has been around in one form or another since 1989. Between 1989 and 2011, the vehicle was always a compact sports car. There were four generations of the Eclipse with different body variations during this time period. The latest iteration of the Eclipse began in 2017 and has been officially dubbed the Eclipse Cross.

SUVs and crossover vehicles have become increasingly popular. The Eclipse has changed with the times to become a five-door crossover SUV. This new version of the Eclipse can comfortably seat up to five average-sized adults. It offers ample room for groceries and cargo too.

The 2020 Mitsubishi Eclipse Cross comes in four major trim levels. There is also a special edition with mostly cosmetic differences from the other models. Every single version of the Eclipse Cross is available in two different drive-train options. They can be purchased with front-wheel drive or S-AWC, which stands for Super All-Wheel Control.

S-AWC is a type of all-wheel drive that is specific to Mitsubishi. Driving forces and braking forces for all four wheels are integrated and controlled for excellent traction and handling. This makes the vehicle consistent and stable in almost any driving conditions.

This article will take a look at each of the four trim levels and the special edition of the Eclipse Cross. Every model will be compared to the previous and next trim level. Key differences will be highlighted to assist potential owners in deciding which trim level is right for them.

Compare the 2020 Mitsubishi Eclipse Cross ES vs LE Trim Levels. What is the Difference?

Every trim level of the Eclipse Cross comes with a 1.5-liter, four-cylinder engine. The engine is a direct-injection, turbo-charged model. It cranks out 152 horsepower and 184 pounds-feet of torque. The engine has a combined fuel-economy rating of around 27 miles-per-gallon. This may vary slightly depending on the drive train and trim level.

Every trim level of the Eclipse Cross also comes with the same automatic transmission system. The system is an 8-speed CVT. A sport mode changes the shifting dynamics for faster acceleration from launch.

The ES model offers 16-inch allow wheels. The LE comes equipped with 18-inch alloys that are painted black. Both are equipped with a set of all-season tires. The ES gets a set from Falken while the LE has a set from Bridgestone. Mitsubishi throws in a spare tire for both models.

On the outside of the 2020 Mitsubishi Eclipse Cross, both trim levels offer many of the same features. Both have halogen headlights. Both models also offer fog lights and LED daytime running lights. LED taillights and a high-mounted stop light are equipped on both as well.

A rear defroster and rear intermittent wipers come standard on the ES and LE trims. Both models have roof spoilers and some chrome trim on the body. The exterior mirrors are heated for fast defrosting in cold weather. The front and rear bumpers are painted to match the body color of the Eclipse Cross. The door handles match as well. The LE gets black-painted side mirrors.

For the interior, there are once again only minor differences. There is a six-way adjustable driver's seat and a 4-way adjustable front-passenger seat. Both trim levels have the same cloth upholstery. The rear seats offer a 40/60 splitting feature for more cargo space when it's needed.

The LE trim level gets the addition of heated seats up front. There is also some extra interior trim and flourishes. The space around the window-switch panels is a glossy black on the LE models. Both trims have the same interior lighting, instrument cluster and multi-information driver's display.

The ES trim has a basic infotainment system with an AM/FM radio and four speakers. It also features a 7-inch display screen, a USB charging port and Bluetooth connectivity. Audio and phone controls are mounted on the steering wheel for easy access.

The LE model adds a 7-inch smartphone-link display screen with a touch-pad controller. Android Auto and Apple CarPlay compatibility are available for the LE trim. There is also an extra USB port. Other sound-system features remain the same.

Both trims come with standard features such as power locks, power windows and automatic climate control. Mitsubishi has provided remote keyless entry for every trim level of the Eclipse Cross. The ES and LE trims come equipped with a rear-view camera to help drivers see better while backing up.

The ES and LE trims come with the exact same safety features. Every Mitsubishi uses the company's RISE body construction technology. RISE stands for Reinforced Impact Safety Evolution. This system is designed to allow the frame and body to absorb impact energy during collisions. The energy is absorbed in such a way that it should lower the chances of injuries.

Both trim levels come equipped with dual-stage airbags up front. There's a knee airbag for the driver and side airbags up front as well. Side curtain airbags offer some protection for all passengers. A LATCH system for securing child seats and child safety locks are standard on all Eclipse Cross models.

The ES and LE offer anti-lock brakes with electronic brake-force distribution. Active-stability control, hill-start assist and a tire-pressure monitor come standard on these two trim packages as well. Last of all, both trims come equipped with a car alarm and an anti-theft engine immobilizer. The immobilizer shuts off the engine if the car is stolen so that the thieves can't get too far.

Compare the 2020 Mitsubishi Eclipse Cross LE vs SP Trims. What is the Difference?

The SP designation stands for special edition. This trim level sits right between the LE and SE models. There's not a lot to say about the SP, as it only offers some cosmetic differences from the previous trim level. It has the same interior, convenience and safety features as the LE.

The SP trim will only be available for a limited time. It will be sold directly by select Mitsubishi dealers. Its main feature is the addition of some carbon-fiber-like accents and trim on the exterior.

Compare the 2020 Mitsubishi Eclipse Cross SP vs SE Trim Levels. What is the Difference?

The SE trim offers a number of new features and options that were unavailable on previous models. The SE model offers automatic headlights. The grille now comes covered in chrome. There's a glossy black centerpiece on the front bumper. The front and rear bumpers on the SE are silver instead of body colored like those of the LE and SP models.

The front wipers on the SE trim can sense rain and will then automatically engage. This trim comes equipped with 18-inch, two-tone alloy wheels. The wheels are once again outfitted with a set of all-season tires from Bridgestone. This trim also gets power-folding side mirrors.

The SE also gets some new options for the exterior. Buyers can add on roof rails for some extra storage space. The SE trim can also be had with a power operated, panoramic sunroof.

On the inside of the SE models, the seat upholstery gets an upgrade. It is now a higher quality fabric. the driver's seat is now 6-way adjustable. The steering wheel and shift knob come wrapped in leather at this trim level. The inner door handles are chrome to match the chrome accents on the outside of the SE. Both visors now get vanity mirrors with illumination.

Mitsubishi's Connect and Safeguard systems are added on to the infotainment and technology features. Buyers will get a free 24-month trial to the service. The rest of the sound system features are the same as before. The automatic climate control is now a dual-zone system in the SE models.

Moving up to the SE trim gets drivers an Electronic Parking Brake with automatic hold. A Blind-Spot Warning alerts drivers of vehicles that may be otherwise outside of their view. Rear Cross-Traffic Alert gives drivers even more awareness of their surroundings. Lane-Change Assist is standard for the SE as well.

Forward Collision Mitigation with Pedestrian Detection detects and warns of objects in front of the car. Just as the name suggests, it can detect vehicles or people that are in danger of an imminent collision with the car. The same auto alarm that was installed on previous trims makes a return again for the SE models.

Compare the 2020 Mitsubishi Eclipse Cross SE vs SEL Trims. What is the Difference?

The Eclipse Cross SEL once again comes with the same engine choices and transmission system. It can once again be had in front-wheel drive or all-wheel drive configurations. It has all of the best features found on previous models except where an upgrade has been made.

On the outside of the SEL, the high and low headlight beams are upgraded to LED models. A roof spoiler now comes standard. The badging is of course changes to reflect the SEL trim level. Other than these minor changes, all other exterior features are the same between the SE and SEL models.

Moving on to the interior, the SEL has a black headliner and pillars. The driver's seat gets upgraded once again to an 8-way, power-adjustable model. The front seats are heated. There is now also the option of having heated rear seats. A heated steering wheel is optional as well. There are some extra small-item storage spaces and pockets in the SEL.

The standard audio system for the SEL is the same as that of the SE. There is, however, an option for a premium system by Rockford Fosgate. Instead of the regular rear-view camera, the SEL trim gets a multi-angle camera for even better views of the vehicle's surroundings. There is also the option for an auto-dimming rear-view mirror.

The standard safety and security features are the same for the SE and SEL trim levels. The SEL gives buyers a couple of extra options. Adaptive Cruise Control is optional. High-Speed Braking capability can be added on to the Forward Collision Mitigation system.

Drivers looking for a crossover SUV would be happy with any model of the 2020 Mitsubishi Eclipse Cross. It's a solid vehicle at every trim level. All of them offer the exact same performance and fuel economy. The only difference is in the available features at each level. There is only a minor price-point difference between trim levels too.

For the best balance of price and features, the SE model is an excellent choice. It features all of the best options that Mitsubishi has to offer for the Eclipse Cross. The additions to the SEL are minor. Some of the best ones are actually just optional anyway. They won't necessarily justify the additional cost for most drivers. The SE will represent the best value for most consumers.
Did you find this article useful?
Please rate this page. Select a star rating from 1 to 5 below:

Save Money on a 2020 Mitsubishi Eclipse Cross:
Find New Car Clearance Prices - Many Vehicles are Selling Below Dealer Invoice Prices.

Every dealer offers a secret price. Many prices are below invoice. Find yours here.
2020 Mitsubishi Trim Level Buying Guides: