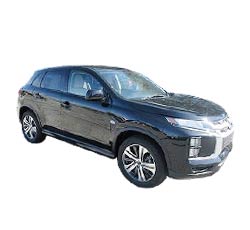 What 2020 Mitsubishi Outlander Sport Trim Level Should you Buy? What is the Difference Between Trims?

The Mitsubishi Outlander Sport is a solid contender in the compact SUV market, primarily because of its budget-friendly pricing. It's not a luxury car by any means, but it has everything a vehicle might need. It offers safety and reliability, it has enough power to make it feel agile, and in terms of design, it has a nice blend of rugged and modern elements. When everything is bundled into one package, the Outlander Sport comes across as a practical vehicle that would appeal to anyone looking for a crossover or smaller SUV that won't break the bank.

Each of the four trims of the Outlander Sport can come in either front-wheel drive or all-wheel drive. Mitsubishi's all-wheel drive system is called All-Wheel Control (AWC). AWC uses sensors to continuously gather data regarding any wheel slippage, and if any issue is detected, the system will adjust accordingly. It will transfer power and braking to those wheels that have the most traction to get the vehicle safely moving, while maintaining control.

Also contributing to the SUV's stability are several other features. With Electronic Brake-Force Distribution, brakes will be optimized in emergency situations and when conditions are less than optimal. Likewise, Traction Control and Active Stability Control are continuously keeping an eye on performance and making the necessary adjustments to torque or braking, all while the driver simply continues on with his or her course.

What makes the Outlander Sport a sensible choice for many customers is its cargo space. Behind the second row, there is 21.7 cubic feet of cargo capacity, which is much larger than almost any sedan out there and larger than many crossovers and hatchbacks. When the second row is folded down, cargo capacity increases to almost 50 cubic feet, meaning that more types of items can be loaded in the back. The back seat is a 60/40 split-bench, so people can decide whether to lower one of the sides or both at the same time to make more room for storage.

With two rows of seating, the Outlander Sport has room for five. Leg room in the front is 41.6 inches, and rear passengers can stretch out a little bit with 36.3 inches of leg room. The relatively high ceiling adds to feeling of spaciousness in the cabin.

Compare the 2020 Mitsubishi Outlander Sport ES vs SP Trim Levels. What is the difference?

These two first trims run on the same four-cylinder MIVEC engine. It has a displacement of two liters, and it comes with 148 horsepower and 145 pound-feet of torque. With this capability and a compact frame, the Outlander Sport doesn't feel weighed down or sluggish. Continuously variable transmission makes for smooth acceleration, which is likely what most people shopping for a vehicle of this price are looking for. A front MacPherson strut works in conjunction with a multi-link rear suspension to cushion any bumps on the roads.

The 2.0 ES and 2.0 SP share a lot of similarities on their exteriors. The Daytime Running Lights, taillights, and headlights all have modern LEDs in them. Having heated side mirrors is key for those frosty days when it's hard to see clearly because of the ice, fog, or other moisture. Their shark fin antennas and 18-inch two-tone alloy wheels help them have a sporty appearance.

While the ES has a roof spoiler, the SP has a noticeably larger one to enhance its style. It's actually the only trim in the line-up that has this large roof spoiler. A Special Edition badge and carbon-style grille are also exclusively offered on the 2.0 SP.

Inside the cabin, everything is designed with comfort and convenience in mind. The Outlander Sport comes standard with lights in the center of the cabin, in the front, and in the cargo area to provide a little bit of illumination for passengers. The front seats can be manually adjusted into optimal positions, and the SP comes standard with heated front seats to make those cold days a bit more bearable.

Some interior touches are that the inner door handles are chrome and the shift panel is covered in a sleek gloss black material. A difference between the trims is that the audio panel is a carbon-style in the ES, whereas the SP has a gloss black audio panel with a silver accent.

Technology could be a main reason why some people would choose the SP over the ES. The ES has a seven-inch audio display and standard HD Radio. In contrast, the SP comes standard with an eight-inch smartphone-link display audio system, Apple CarPlay and Android Auto compatibility, and SiriusXM Satellite Radio. (This upgraded version is optional in the ES.) Both trims come with Bluetooth, and they broadcast audio with the use of four speakers. Controls mounted on the steering wheel can make it more convenient to make adjustments to playback.

Though they're the lower trims of the Outlander Sport, these models have remote keyless entry, air vents for the rear-seat passengers, and a center armrest in the back row that comes with cupholders.

Safety features are, honestly, a bit modest in the Outlander Sport ES and SP trims. They come with the basics that one would expect, such as anti-lock brakes, air bags, and three-point seat belts for all passengers. The brakes are effective at their job, thanks to a combination of solid disc brakes in the rear and ventilated disc brakes in the front. Hill Start Assist can be handy in case the vehicle is stopped on an incline; this system keeps pressure on the brakes until the driver puts pressure on the gas pedal, and it can keep the vehicle from sliding backwards.

Compare the 2020 Mitsubishi Outlander Sport SP vs SE Trims. What is the difference?

With the 2.0 SE, there are some upgrades that make the SUV feel a bit more sophisticated. LED fog lights can immediately draw one's attention to the front of the vehicle, and they can prove to be useful when there's low visibility. Automatic headlights can be very convenient to have, and they prevent those situations when people forget to turn their lights on or off. Additionally, the SE has a chrome side garnish that can shine in the light and satin silver grille accents.

Some more functional elements in the SE that the SP doesn't have are side mirrors with built-in turn indicators and a power-folding feature as well as front wipers that can turn on if they sense rain.

Interior differences are fairly minor, though they will likely be noticed by anyone with an eye for details. The SE's vanity mirrors come with illumination, and its steering wheel and shift knob are wrapped in leather that's soft to the touch. Plus, its window switch panels are a satin gray.

With these trims, the technological differences are more minor, since they have the same infotainment system. The SE does have six speakers which are an upgrade over the SP's four speakers. It also has a more convenient system for unlocking the vehicle and starting things up, as it comes with the FAST-key entry system and push-button start.

Safety is the category in which there's a big jump in features from the SP to the SE. The SE comes with four driver-assist features that are becoming commonplace in the market. Automatic high beams can better illuminate the road, while having the ability to instantly switch to low beams if other vehicles are present. Blind spot monitoring is useful when it's hard to see other vehicles, and its companion system monitors rear cross traffic while the Outlander Sport is in reverse. Lane Departure Warning does a similar job, alerting drivers when they're about to move away from the center of their lanes.

Last but not least, there's forward collision mitigation. It can warn drivers about any potential accidents in which they would otherwise be rear-ending vehicles or hitting pedestrians. As needed, the system can hit the brakes in an effort to prevent an accident from occurring.

Compare the 2020 Mitsubishi Outlander Sport SE vs GT Trims. What is the difference?

A major upgrade that the 2.4 GT comes with is an enhanced engine. The highest trim of the Outlander Sport is powered by a 2.4-liter engine. Like the 2.0-liter engine, it has four cylinders, but its larger displacement helps it achieve 168 horsepower and 167 pound-feet of torque. Having an extra 20 horsepower may not seem like much until its time to climb a hill or quickly merge onto the highway from an on-ramp, and in these cases, the more power the better.

The exterior of these two trims are almost identical. One of the exceptions is that the GT comes standard with black roof rails. Some people who frequently go skiing or kayaking, for example, may want to go with this trim just because of this component.

Some changes are found in the seating material. The lower three trims come with fabric seating surfaces, but the highest trim uses a combination soft-touch material. While not leather, it's a definite upgrade and feels more upscale than fabric. The seats are nicely complemented by a black headliner and side pillars.

In the convenience department, the trims are very comparable. However, the GT's rearview mirror comes with HomeLink, allowing it to act as a garage door opener. The SE's rearview mirror doesn't have this function, though it does have the same auto-dimming capability as the GT's mirror.

In general, the four trims of the 2020 Mitsubishi Outlander Sport are more similar than they are different. Take the front seats in the SUV as an example. All four trims have manually adjustable seats, with the top three trims coming with a heating element for the driver and passenger. In the end, it comes down to small details that have to be taken into consideration when making a decision regarding trim.

If anyone wants more horsepower, then the GT is the only choice. Some benefits of going with this trim are that it will come with standard roof rails and a slightly improved seating material. Upgrading to have 20 more horsepower might not be worth it for many, though, when price is factored in. In this case, it comes down to the more affordable ES, the SP with its smartphone connectivity, or the SE with its driver-assist features.

Since the SE is still competitively priced compared with many other compact SUVs, it comes out as a winner. It will give people extra peace of mind as they hit the roads.
Did you find this article useful?
Please rate this page. Select a star rating from 1 to 5 below:

Save Money on a 2020 Mitsubishi Outlander Sport:
Find New Car Clearance Prices - Many Vehicles are Selling Below Dealer Invoice Prices.

Every dealer offers a secret price. Many prices are below invoice. Find yours here.
2020 Mitsubishi Trim Level Buying Guides: