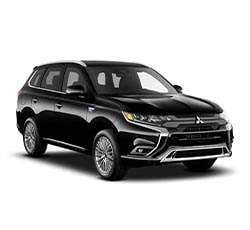 What 2022 Mitsubishi Outlander PHEV Trim Should You Buy? What is the Difference Between Trims?

Are you thinking about purchasing a new hybrid vehicle? If so, the plug-in 2022 Mitsubishi Outlander PHEV might be one worth looking into. And this might just be the right year to get the Outlander PHEV. This freshly redesigned model has an all-new, futuristic body that looks nothing like the more outdated outgoing 2021 model. The cabin is a whole lot more upscale too.

The thing you need to know about the Outlander is that it shares its mechanical details and build with the Nissan Rogue. Unfortunately, on the gas-powered Outlander, that has meant putting up with the same under-powered 4-cylinder engine that powers the Rogue. But the Outlander PHEV has a slightly different set-up. Granted, the PHEV variant is not the most exciting ride in its segment either.

This year, though, Mitsubishi is dropping a more powerful plug-in hybrid powertrain into the Outlander PHEV. Not only does it boost the all-electric range, there is a jump in power output, taking it up to 126 horsepower and 147 lb-ft of torque. And that should certainly make a difference in terms of how quickly the Outlander PHEV accelerates.

With the many changes going on for the 2022 line-up, is right now the time to buy the Outlander PHEV? If so, which trim level should you invest in? You will have to decide whether the base SEL, mid-tier LE, or line-topping GT trim level is the right one for you after you read through this comparison review.

Compare the SEL vs LE Trims. What is the difference?

At the start of the 2022 Mitsubishi Outlander PHEV line-up is the SEL trim level. The SEL is powered by the same 2.4-L4-cylinder engine and 13.8 kWh lithium ion battery that come in the two higher trim levels. It also has the same 80 kWh auxiliary battery. To get the main drive battery charged on a 120V/8A battery charger, it takes about 14.5 hours. You can shave it down to 9 hours on a 120V/9A charger. With a 240V/16A EVSE, that time gets trimmed down to 4 hours flat. And, with a fast-charging CHAdeMO DC in use, it only takes 25 minutes to get up to 80%. On top of that, a standard battery heater for the cold weather speeds up the warm-up time. The AC synchronous permanent magnetic motor has a front power output of 60 kW while the rear is rated at 70 kW.

A single-speed selectable drive mode reduction gear box makes up the front transmission. Meanwhile, in the rear, there is a single-speed, fixed reduction gear box equipped. The standard suspension is composed of front MacPherson struts with a stabilizer bar and a rear multi-link with a stabilizer bar as well. Electric power steering is built into the Outlander PHEV, and 18-inch aluminum alloy wheels come standard across the line-up.

This five-seater SUV has a max towing capacity of 1,500 pounds when properly equipped. It is protected by a 5-year/60,000-mile Basic Warranty. The Limited Powertrain Warranty goes for 10 years/100,000 miles, and the PHEV components and main drive battery have the same time limit. The Anti-corrosion Warranty goes for 7 years or 100,000 miles while Roadside Assistance is covered for 5 years and unlimited miles.

The 2022 Mitsubishi Outlander PHEV's base trim is known as the SEL. On the outside, it features quite a few new design elements that give it a more contemporary look than what you would see on the 2021 Outlander PHEV. This new design includes standard halogen headlights, LED daytime running lights, and fog lights. The lights are automatic, and there are LED taillights on the rear of the vehicle. The front and rear bumpers are both body-colored and come with silver accents. There are chrome accents with the side sill garnishes, and the SEL has chrome side-window molding. The LE has black side window moldings instead.

Both vehicles have body-colored exterior door handles, but the SEL has body-colored side mirrors with turn indicators while the LE features black side mirrors with turn indicators built in. The front windshield wipers are variable intermittent, and there is one rear intermittent wiper. The rear window also has a defroster with a timer built into it. The front wipers can sense rain, and they have a wiper de-icer. There is a standard roof spoiler, shark fin antenna, PHEV badges, and a tire repair kit.

The LE sees a few additions to the exterior of the vehicle. It also rides atop upgraded wheels, which come as 18-inch multi-spoke alloys with dark chrome (whereas the SEL's have no dark chrome on them). The LE trades the SEL's silver roof rails for gloss black ones, and a power sunroof is tacked on for extra sunshine and airflow into the cabin when you need it.

So, how do these two trim levels compare on the inside? For their price point, they are pretty feature-rich. Both come with a color multi-informational display that shows important vehicle data. The meters are high contrast so that they are easy to see in any lighting condition. You get an energy meter that shows the charge, ECO, and power. Up front, there are two illuminated vanity mirrors equipped on the visors. Front floor lights and map lights enhance your ability to see inside of the cabin after dark. There are also a dome light and a cargo light. The SEL has leather-appointed seating surfaces, but the LE trades that off for some synthetic suede seating surfaces that incorporate a quilted diamond pattern.

Heated front seats are standard issue. There is an 8-way power adjustable driver's seat and an 8-way power-adjustable front passenger's seat. The driver's seat incorporates power lumbar support and has a seatback pocket for extra storage. The rear features a 60/40-split folding rear seat with reclining adjustments to help occupants max out their relaxation. The steering wheel is wrapped in leather, and it is tilting and telescoping. Instrument panel accents are done in a silver carbon-style material. The SEL has a matching floor console, but the LE makes it gloss black. Both trims have a gloss black audio panel, a gloss black shift panel, a black headliner and pillars, a remote fuel lid release, and a sport mode button.

Convenience features are fairly similar between the SEL and LE. Both are equipped with an 8-inch smartphone-link display audio (SDA), smartphone app integration via Apple CarPlay and Android Auto, a 3-month all-access trial to SiriusXM, and HD Radio. The LE does add the Mitsubishi Power Sound System. While the SEL has 6 speakers, the LE has 8. Bluetooth wireless technology is included, as are audio and voice recognition controls mounted to the steering wheel, front and rear USB ports, a rear-view camera, and a twin motor S-AWC drive mode selector that includes Sport mode. The SEL sticks with a basic electric shift lever while the LE's is done in gloss black. There are also EV drive mode switches up front.

Other standard features include Mitsubishi Remote Control, dual-zone automatic climate control, a micron air filtration system, an electric heater, rear seat air vents, rear floor heater ducts, cruise control, and the FAST-Key entry system. You can use the push button start to fire up the engine, and all windows are power operated. There is a power remote liftgate for easy access to the cargo area. A 12-volt power outlet is also included. Additionally, you get an auto-dimming rear-view mirror with HomeLink integrated into it, a floor console box containing an armrest, a sunglasses holder (only on the SEL since it cannot be built in with the sunroof equipped), bottle holders on the front doors, a center armrest with cupholders for the rear seat, an underfloor storage space in the cargo area, and assist grips.

Compare the LE vs GT Trims. What is the difference?

The GT is the Outlander PHEV's line-topping trim, and it sees the inclusion of several major upgrades. To the exterior, you will find LED low and high beam headlights gracing the front fascia. There are also some nifty LED fog lights for enhanced visibility in the fog. Decal-wise, the GT sticks with the SEL's décor and veers away from the LE's glossy black features. The only other distinguishing feature is its standard GT badging.

What is different on the inside? Well, more than what is on the outside, that's for sure. The GT's leather-appointed surfaces have the LE's diamond quilting pattern integrated into them, and there are premium gloss black accents on the instrumentation panel and floor console.

The cabin also gets upgraded to a multi-angle rear-view camera and adds an extra rear USB port. There is even a 1500-watt AC power supply with two outlets incorporated into the design. Additionally, the auto-dimming rear-view mirror gains a digital compass. The only change to the list of standard safety features is the addition of adaptive cruise control.

The 2022 Mitsubishi Outlander PHEV adds more interior and cargo space for the model year - things that buyers felt were lacking on previous iterations of this SUV. Also, the list of infotainment and safety features feels beefier, and the features themselves seem to work better than they did before. The ride is just as comfortable and compliant as ever though, and the front seats are particularly cozy. And, really, who can pass on such generous warranty coverage?

There are, of course, some downsides to buying the 2022 Outlander PHEV though. Like many other plug-ins, it is slow to accelerate. Frustratingly so, even. And, on top of that, some of the voice control functions don't seem well able to recognize natural speech patterns, something which other automakers are really hunkering down on trying to refine.

That being said, the new Outlander PHEV has a lot of merits. The way we recommend going is with the mid-tier LE trim, which was added to the line-up in 2021. It was a smart addition on Mitsubishi's part, giving an air of sportiness to a vehicle that most people wouldn't assume to have a sporty vibe. The standard sunroof and 8-speaker sound system alone make it worth the cost to upgrade. The glossy black accents can be a bit overwhelming, but you will likely get used to them pretty quickly.

The GT trim level unfortunately does not offer near enough worthwhile upgrades. Adaptive cruise control is probably the only thing most buyers will want on it, and that's something you might want to forego in order to get the most value from your plug-in. The mid-level LE does a fine job of balancing cost and features.

Compare Trims on other Mitsubishi Models: