2014 Nissan Rogue Pros vs Cons. Should You Buy? 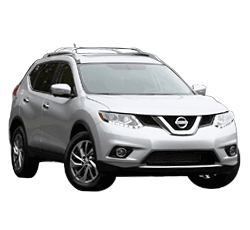 The newly redesigned Nissan Rogue for 2014 was redesigned with families in mind. It even includes a third row of seats for toddlers. This family package makes it a 7-passenger capacity vehicle. There are several models available, such as the Rogue S, SV, and SL with Front-Wheel Drive (FWD) standard and All-Wheel Drive (AWD), optional. The Rogue S Manufacturer’s Suggested Retail Price (MSRP) starts at $23, 350 with destination charge included, while the Rogue SL with AWD and all the factory installed options tops out at $33,640. Optional upgrades include the seat-belt extender, hatch tent, accent lighting, and more. Also, the redesign gives it a larger vehicle look that Nissan hopes will attract more male buyers. [ For the 2015 model see - Nissan Rogue Pros and Cons ]


12 Reasons to Buy a Nissan Rogue - the Pros

1) The Active Engine Braking system makes for steady even stops every time. This feature also engages while going down steep hills or mountains, so you don’t have to ride the brakes constantly.

2) The third row of seats adds to seating capacity and comfort. Although these seats are not for adults, it leaves more room in the second row for them.

3) Improved EPA-rated miles per gallon over the 2013 and some comparably built vehicles.

4) The NissanConnect infosystem allows you to connect your iPhone to facilitate better use of applications and allows you to play music already downloaded over your on-board system.

5) You’ll love the Easy Fill Tire Alert system, which monitors the air pressure level in all four tires, alerts you when any are low, and sounds the horn when you have filled the tire to the recommended air pressure.

6) Leg room is more than adequate in the second row and you’ll find it’s more comfortable than either front seat, at least I did. Your teens will love the extra leg room and it’s elevated so they’ll have a better view of the country-side as you travel.

7) The on-board technology, such as lane change and blind spot warning with the 360 degree camera is impressive.

8) The cabin is remarkably quiet at speeds under 50 miles per hour.

9) There’s enough power in either of the drive-trains, FWD or AWD to accelerate your way out into traffic, while passing, and for climbing hills.

10) The two-tier trunk is perfect for groceries and other small cargo, plus the divide and hide system allows for proper storage without shifting.

11) Active Trace Control is a system developed by Nissan to help drivers safely maneuver around corners by applying the brakes to the tires it deems necessary to auto-correct any over steering or over accelerating while in a corner, or as the vehicle exits.

1) There are currently some bugs in the infosystem software, but the Nissan people are aware and are working on a fix.

2) It is too easy to switch off the automatic softening mode on the headlights while operating the turn signals.

3) Roof-rack crossbars make too much noise when travelling at speeds over 50, but not as bad as the Mazda CX-5 that I test drove.

6) Many men still complain that the AWD is not on par with the Subaru Forester, but that is where Subaru started from and I think Nissan made a lot of progress.

The 2014 Nissan Rogue, the second bestselling car on Nissan’s lot, was redesigned with your family in mind. Lots of its features, standard or optional, were added to increase its appeal for family use.

Although a lot of people are leery of the Continuously Variable Transmission and it does take some getting used to, overall it is not too bad. It accelerates quick enough to get you out there into traffic and on your way. And, combined with the fuel efficiency it provides, it makes the vehicle a better value. The Nissan Rogue’s starting MSRP of $22,790–$29,630 compares in price with the other vehicles in its class:

The National Highway Traffic Safety Administration (NHTSA) recently released its rating for the 2014 Nissan Rogue and other compact SUVs.
According to blogs.cars.com, The 2014 Rogue was rated as 4-Stars overall and the finding can be read here:

• 2018 Nissan Rogue trim levels. What you get with each trim configuration.