2014 Nissan Sentra Pros vs Cons. Should You Buy? 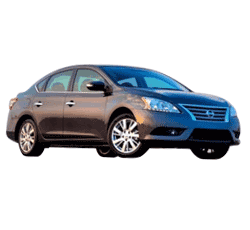 The 2014 Nissan Sentra is a stylish and reliable sedan that is more about function than form. It enters into a crowded compact sedan field with competitors like the Ford Focus, Hyundai Elantra, Toyota Corolla and Chevrolet Cruze. As illustrated below, the Sentra compares quite favorably to its competition. The vehicle provides a smooth ride, comfortable seating and a durability and reliability that only the Toyota Corolla and Mazda 3 can match. This year's Sentra is available in the following trim levels: S, SV, SR, SL and FE. It has front wheel drive and offers either an automatic or manual transmission. The Sentra has a four cylinder engine with 1.8 liters and 130 horses. [ For the 2015 model see - Nissan Sentra Pros and Cons ]

The 2014 Sentra's continuously variable transmission, suspension and steering have new and improved tuning. The result is a vehicle that handles with better precision and a more comfortable ride. 2014 also brings the addition of cushion storage compartments in the lower sections of the vehicle's front seats. There's also smartphone integration capabilities, a NissanConnect system with navigation, voice recognition and an Auto Hazard Warning indicator. The SL, SV and SR trims are now equipped with a front armrest that slides.

2) The exterior is just stylish enough to make the vehicle appear to make the ranks of a low end luxury sedan when in reality it is an economically efficient compact sedan. It sits on 17 inch aluminum-alloy wheels and has an available power moonroof and spoiler.

3) The Sentra is a compact sedan yet it is capable of seating up to five people. This means that its interior is quite spacious especially compared to competitors in the compact sedan field. Rear seats are 60/40 split folding and the trunk is larger than you'd imagine.

5) The Sentra comes with a very cool “Easy Fill Tire Alert” technology. This system makes the Sentra's horn honk when the operator fills the vehicle's tires up to the proper air pressure.

6) It doesn't skimp on the safety features. While the Sentra is an affordable, small sized sedan, it isn't a death trap by any means. While some of the crash test flaws are noted below, the vehicle does provide 6 airbags, anti-lock brakes, an electronic stability system with traction control and brake assist. There is also an optional security system.

7) The Sentra is incredibly cheap for all that it offers. The starting MSRP is only $15,990. In this day and age it is rare to find a reliable sedan with a decent amount of bells and whistles for under $20,000. This is one of the most economically efficient compact sedans on the market.

8) The Sentra FE trim is capable of 40 mpg. This puts the Sentra at the top of the compact sedan class in terms of fuel economy. The other trims have an average of 27/36 mpg on city and highway roads, respectively.

9) The SV trim, one step up fro the S, has a plethora of options at an incredibly affordable price. The SV adds a six speaker audio system, upgraded upholstery, cruise control and audio buttons on the steering wheel and much more.

10) The Sentra has superior braking capabilities compared to other small size sedan competitors. In Edmunds testing, a Sentra SL scored much higher than the rest of its class by stopping from 60 mph in only 118 feet.

1) Although the Sentra has refined steering, it still lacks a bit of precision. The steering wheel doesn't always respond exactly as the driver would like. There isn't a major problem with the steering but more time and effort could have been spent on mastering its responsiveness.

2) The Sentra lacks the ability the accelerate at the rate that some drivers might expect. This isn't to say that the car lacks power. Yet when the driver puts the pedal to the metal, the Sentra seems a bit flat footed and takes a second or two to respond to the driver's command.

3) The Sentra's interior doesn't "wow". It is plain and generic looking, sort of like the interior of the bargain basement Nissan Versa. The Sentra's bare bones interior is definitely a sore point in comparison to competitors like the Ford Focus or the Mazda 3. There's just not much going on on the inside of the vehicle. But this isn't a vehicle designed for the bourgeoisie.

4) Unfortunately, the vehicle rates out at “poor” for its small overlap frontal impact. The Sentra also came up a bit short of ideal with its NHTSA four star frontal crash rating. Yet most compact vehicles won't withstand a crash like a full size sedan, sport utility vehicle or truck. It's simple physics.

5) The S trim lacks Bluetooth connectivity. This feature should be mandatory across the board for all new vehicles, considering that we live in the age of mobile communication devices. Bluetooth is included on the SL trim but will cost $350 on the SV and SR trims.

While the 2014 Nissan Sentra surely has its noticeable flaws, the vehicle is economically efficient. Simply put, it is an affordable and trustworthy compact sedan that will appeal to a variety of demographics. Nissan didn't merely spit out another 2013 Sentra with a few new bells and whistles. The refined tuning of the vehicle's steering, suspension and transmission along with smartphone integration and a navigation system are enough to pique the interest of most potential buyers. The 2014 Sentra stands near the head of the affordable compact sedan pack.

• 2018 Nissan Sentra trim levels. What you get with each trim configuration.