2014 Nissan Versa Pros vs Cons. Should You Buy? 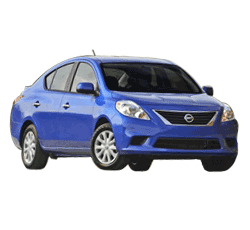 The Nissan Versa is aimed at buyers who value practicality over prestige and luxury. This subcompact is offered with two body styles: a sedan and a hatchback. It is designed for effective, basic transportation without any unnecessary stylistic flourishes. [ For the 2015 model see - Nissan Versa Pros and Cons ]

What's New for the 2014 Nissan Versa
The five-door Note has been added to the line and the gas mileage has improved since the last generation of Versas; aside from those additions, the 2014 model has only a few changes to its trim levels and option packages.

1. Cost
The Nissan Versa has been rated as the cheapest new car in the US for two years running. It manages to come in at a low price point while providing the same features as many of its competitors.

3. Ride Quality
The Versa offers a comfortable ride, which is impressive given its class and price. The suspension is soft enough to absorb vibrations from most uneven road surfaces so that the Versa's ride is smoother than many in its class.

4. Spacious Interior
Nissan states that the versa has more legroom than any other vehicle in its class. While the veracity of the claim is uncertain, it is true that the backseat in the 2014 Nissan Versa is extremely spacious. It is among the few subcompacts that provide comfortable rear seating for adults.

5. Features
The Versa sedan's base S trim comes with air conditioning, a tachometer and a sound system with auxiliary input. The next trim up is the SV and it includes Bluetooth, 15-inch alloy wheels and audio controls in the steering wheel. The top-level SL trim comes with satellite radio and rearview monitors. When it comes to the Note, buyers can upgrade from the base S trim to the S Plus; the S Plus trim gives them the CVT transmission. The Versa's SV trim provides owners with an audio display and a rearview monitor. The top-level SL trim gives them fog lights, heated seats and 16-inch wheels.

6. The Engine
The Versa's engine will probably not win many drag races, but it is perfectly adequate for daily driving. A 1.6-liter engine with four-cylinders powers both the Sedan and Note. The engine provides 109 HP and is mated to one of three transmissions: a five-speed manual, a four-speed automatic or the CVT transmission.

7. Safety
Standard safety features include antilock brakes and front seat side and full-length side curtain airbags. The SL gets an alarm system that indicates when the car has achieved the correct psi. the National Highway Traffic Safety Administration has awarded the 2014 Nissan Versa four out of five stars for its overall crash protection.

8. Exterior
Nissan has dropped the Versa's roofline in recent years and has given it aerodynamic curves so that its appearance is sleeker when compared to the older, boxy models. The Note gets a slightly different exterior design that includes headlights that look sportier that the sedan's and much sportier than others in the class like the Toyota Yaris.

9. Interior Features
The Versa Note has a nicer interior than the sedan, including luxury features like a rear seat armrest. A driver armrest is optional as are heated cloth seats and a rearview monitor.

10. Ratings
JD Power and Associates is a widely known company that rates vehicles based on customer satisfaction research. They rate the 2014 Nissan Versa as being above average for quality.


Potential Drawbacks of the 2014 Nissan Versa - the Cons

1. Not Sporty
With the Versa, it is clear that Nissan is placing a priority on value and interior space over style and performance. The Versa is intended to be a practical and effective means of transportation, not to be sporty; drivers expecting it to handle or look like a sports car will be disappointed. The Versa deals well with most driving situations, but may struggle with passing on the highway and on hills.

2. Hard Plastic Interior
Plastic components are common in virtually all the cars in the budget subcompact class, and the Versa is no exception. Many interior elements are made with lower cost materials.

3. No Telescoping Steering Wheel
Since the steering wheel does not telescope, some drivers may find it less than comfortable.

The 2014 Nissan Versa does not present anything new or revolutionary, but it is a solid entry in the budget category. It is a vehicle for consumers who want all the benefits of owning a new car without spending a lot of money.

• 2018 Nissan Versa trim levels. What you get with each trim configuration.