2015 Nissan Altima Pros vs Cons. Should You Buy? 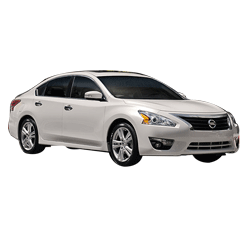 Should You Buy a 2015 Nissan Altima? Here Are Some Reasons For and Against

Nissan’s Altima has long been their best-selling midsize family sedan as well as a top choice for those living the carefree single lifestyle. U.S. News and World Report have consistently listed the Altima as one of the top 10 best affordable midsize cars in the country. Sales records certainly do not dispute the facts. Even with changes made over the years, the Altima has not lost its appeal.

The 2015 Nissan Altima promises to deliver sleekness and better performance. The roomy cabin includes a soft, rich leather interior design to further enjoy your peace and comfort. Consumers can also expect the best in outstanding fuel economy. Critics seem to agree on the sporty handling of the steering wheel makes it all the more fun since the new Altima is equipped to handle twisty challenging roads. Standard features include Bluetooth and push-button start. There is also the option to get a USB/iPod input and satellite radio installed. Listed below are just 10 reasons to buy a new 2015 Nissan Altima.

Ten Reasons to buy a 2015 Nissan Altima - the Pros

Not a whole lot else can top one’s list when it comes to saving money on today’s gas prices. If you’re still settled on buying a hybrid then the Altima is the next best thing. Being able to boast an astounding 38 miles per gallon on the highway makes the Altima even better and more efficient than some compact economy vehicles. The 4-cylinder model car gets 27 miles per gallon on the street.

The look of the Nissan Altima is not that of your average looking midsize family sedan. In fact, it is a cross between sports and luxury car. Having been slightly tweaked, the Altima’s style is bold yet simple with its striking new grille, halogen headlights and metallic wheels. The outward appearance only beckons prospective buyers to take a look inside.

It is class and sophistication all the way for this midsize car. Drivers will think they have buckled up and gone to heaven once they sink down into soft cushy ergonomically designed seats or feel the smooth texture of the wood grain accents. Aside from the visibly obvious, there is much more to experience while riding inside an Altima. Physically, there is generous space for backseat passengers with plenty of room for long legs to stretch out. With maybe the exception of a little soft music or light conversation, the ride is quite serene with very little engine noise. Automatic climate control is certainly an added plus.

You need a family car but don’t want to appear as though you’re driving your grandma’s non-power steering antique model? Well, the new lighter weight Nissan Altima not only squashes those notions but you will have fun driving this car especially for its smooth acceleration. And speaking of acceleration, this powerful little beauty packs enough punch to allow drivers to reach 60 miles per hour from rest within eight seconds.

Two of the Altima’s best safety features are the tire pressure monitoring system, alerting drivers they’ve reached the maximum pressure when adding air, and the blind-spot monitoring. Peace of minds can also be had by the lane-departure and approaching objects warning systems. The car comes equipped with a first aid box and an emergency road kit. The trunk size is average, but does have a sub-floor trunk organizer. Who can ask for anything more from a vehicle with a 5-star overall safety rating?

Consumers can choose from several affordable option packages if they so desire. These include: a Sport Value Package, Navigation Package, and Technology Package. Stand-alone features are also available.

One of the absolute best features of any Nissan vehicle is their prices and the Altima is no exception. In 2014, Kelley Blue Book named the sedan as “one of the best sedans under $25,000.” Leases may start as low as $189 per month. Rest assured, you will receive plenty for your money.

The auto-making giant’s name and reputation has remained strong and reliable for decades. JD Power and Associates gave the 2014 Altima an above average reliability score and there no reason to except anything less for the 2015 Altima. Long story short, you can count on a Nissan Altima.

Nissan realizes this is the age of sophisticated people living in a technology driven world. So a group of innovative folks at the company went one step further and created the Nissan Connect System. With a simple touch on the screen, you will have access to apps like Facebook, Pandora, and iHeartRadio. Just think, you will be able to listen to your heart’s content to all the music you cherish. One other bonus feature is the ability to do hands-free text messaging.

Just as you and your family deserve transportation that reigns supreme, your wallet deserves relief and rest from time to time. Maintenance costs are low.

Of course, with every pro there is the possibility of a few cons to dissuade a decision or opinion. Despite the impending recall of 220,000 Altima sedans due to chances of the car’s hood flying open while driving, there are very few complaints voiced.

As for the hood issue, the National Highway Traffic Safety Administration stated the problem revolves around the inner panel of the hood. If a driver released the primary hood, it is possible that the second latch could stop working thus enabling the hood to open without warning. The recall may affect 2013 Nissan Altimas manufactured between March 6, 2012 and February 28, 2013.

Other cons includes the CVT (continuously variable transmission), which can be noise at times and lack of adequate headroom for taller passengers.

Overall, the Nissan Altima remains one of the most appealing and best-selling midsize sedans across the country.

• 2018 Nissan Altima trim levels. What you get with each trim configuration.