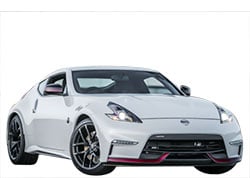 The Nissan Z car line comes with loads of history behind it, taking many shapes over the passage of time. Currently available both in convertible and coupe forms, the Nissan 370Z offers sporty styling and handling at a price point that is relatively low. This is a combination that is matched by very few other cars in today’s auto market.

The 2016 Nissan 370Z has seen a number of minor changes. Probably, the most significant modification being a noise-canceling system that has been fitted to the 370Z coupes.

All the 2016 Nissan 370Z versions, with the exception of the Nismo models get their power from a 3.7-liter V6 engine producing huge 270 pound-feet of torque and 332 horsepower. The 370Z car is going to both impress you on the open road and off the line. It is power packed.

According to auto critics, the V6 engine of the Nissan 370Z delivers strong acceleration.

Available now for the 2016 Nissan is active noise-cancellation technology.

Most auto reviewers agree that the 2016 Nissan 370Z dashboard controls are easy to locate as you drive and quite simple to operate.

The 2016 Nissan 370Z 2-seat sports car can be accessed as a soft-top convertible (Roadster) or hatchback coupe.

The Nissan coupe comes in several trim levels and options:

The 370Z Roadster is available in base, Touring as well as in Touring Sport trims.

The 370Z's cabin is sufficiently big for taller drivers. The positioning of the steering wheel and the driver’s seat makes for an excellent driving position.

Clearly, the Nissan 370Z is designed for road enthusiasts. Specifically, the manual transmission’s SynchroRev Match mode is a delight for any enthusiast. It makes you feel like one of those professional auto racers.

Each of the 2016 Nissan 370Zs comes with traction & stability control, side airbags, and antilock brakes.

The 370Z has not experienced NHTSA recalls due to safety issues. As of now, there is no data on the 370z reliability.

You also get a powertrain 60,000-mile five-year warranty.
Buying Tip: To avoid overpaying on a new car, shop prices online first. Get up front pricing before you walk into a dealership. We recommend the following free services; Car Clearance Deals, NADAguides, CarsDirect & Motortrend.
These free services will offer you the lowest prices and supply you with multiple competing price quotes. You will know the best price before you visit the dealer.

1) Ride not too Strong

Some automotive journalists have written that the 370Z doesn't come out feel like some of the rival V8 engines in sports cars. The ride has been seen as not being too firm, a common challenge in other sports cars too.

Some reviewers think the materials in the 370Z which are a blend of padded and plastic surfaces are premium, although a couple deems them rather mediocre. Overall, the interior materials are somewhat pedestrian.

Test drivers feel that the 370Z lacks much storage space in the cabin.

Some automotive reviewers have reported that the visibility has been limited as a result of the small windows of the 2016 Nissan 370Z, although that is typically a common problem in most sports cars.

Auto reviewers have pitted the Nissan 370Z against the Chevrolet Camaro and the Mazda MX-5 Miata 2016 models.

The latest Nissan 370Z generation made its debut during the 2009 model year, which makes it one of the most enduring models on the auto market. The 2016 Nissan 370Z remains a top-tier road athlete that is relatively affordable with plenty of value to be found in it.