2016 Nissan Frontier Pros vs Cons. Should You Buy? 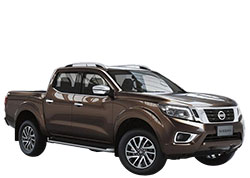 Should You Buy a 2016 Nissan Frontier? Here are the Pros and Cons

Over the last decade, the Nissan Frontier has received only a small number of updates. However, it still remains one of the most capable mid-size pickup trucks on the market. While the base model has an attractive price tag, the rugged Pro-4X trim is designed to overcome virtually any obstacle in its path. The V-6 model’s impressive towing capacity will also appeal to a lot of drivers.

Unsurprisingly, the 2016 Nissan Frontier is basically the same as last year’s model. However, buyers can now choose from a few new paint colors.

The four-cylinder engine’s durability has helped it to remain relevant. Nissan has tuned the popular 2.5-liter engine to develop a respectable 152 horsepower and 171 pound-feet of torque. When fitted with a manual gearbox, the 2016 Nissan Frontier delivers decent gas mileage. With a combined fuel economy rating of 21 mpg, drivers will be able to save some extra cash.

Some drivers will need the V-6 engine’s enhanced power output. The larger engine pumps out a fulfilling 261 horsepower and 281 pound-feet of torque. When traveling in a rugged environment or hauling a hefty load, the V-6 model’s additional performance will come in handy. Unlike the four-cylinder version, the V-6 engine is available with four-wheel drive.

The 2016 Nissan Frontier is a great alternative to a full-sized pickup truck. When fitted with the necessary gear, the Frontier can be used to tow a variety of different things. While the four-cylinder models max out at 3,500 pounds, the V6-powered models can pull up to 6,500 pounds.

Even the base version of the 2016 Nissan Frontier has a reputation for being durable. Because of the truck’s beefy frame, drivers can feel confident when traveling in a rough environment. On average, owners can expect to get at least 250,000 miles of service out of their Frontier. This is a big advantage for the drivers who are seeking long-term ownership.

For the drivers who plan to tackle an off-road trail, the Pro-4X trim promises to get the job done. Sturdy skid plates help protect the truck’s critical components from damage. To keep the truck from getting stuck in deep mud or snow, Nissan has equipped it with a locking rear differential. Some of the other off-road components include all-terrain tires and a special set of shock absorbers.

The Desert Runner trim definitely makes its presence known. A sportier bumper and a muscular stance help it to stand out from the rest of the lineup. Although the Dessert Runner trim is not as rugged as the Pro-4X model, it looks extremely tough. Off-road tires and a raised suspension enable it to turn heads.

Although the regular cab version will suit most drivers, the crew cab model offers enough room for families. Because of the crew cab’s four-door design, the passengers will not be forced to squeeze behind the front seat. Most people will find the available legroom to be adequate.

In a world of high-tech wizardry, the Frontier’s rather simple interior will appeal to plenty of shoppers. All of the controls are well-placed and neatly organized. A traditional gauge cluster allows drivers to focus more on the road ahead. Although the higher trims come with a touch-screen infotainment system, it is very easy to use.

The 2016 Nissan Frontier can double as a work truck and a recreational vehicle. An under-seat storage bin gives drivers a place to keep their tools and other belongings. The available rear seats can be flipped up to expand the truck’s cargo capacity. Drivers will also appreciate the locking tailgate and 12-volt power outlets.

While the 2016 Nissan Frontier is far from being a sports car, it still manages to deliver an engaging driving experience. This is especially true for the drivers who crave adventure. Unlike most of today’s full-sized pickup trucks, the Frontier offers a manual transmission.
Buying Tip: To avoid overpaying on a new car, shop prices online first. Get up front pricing before you walk into a dealership. We recommend the following free services; Car Clearance Deals, NADAguides, CarsDirect & Motortrend.
These free services will offer you the lowest prices and supply you with multiple competing price quotes. You will know the best price before you visit the dealer.

Reasons Not to Buy a 2016 Nissan Frontier – The Cons

1) Some Models Are Quite Thirsty

The manual-equipped base model delivers decent fuel economy. Unfortunately, the other engine and transmission combinations offer subpar gas mileage. In fact, the 4WD Frontier only returns 15 mpg in the city.

The new Frontier is available with a rear-view camera and parking sensors. However, modern safety innovations such as blind-spot monitoring are not available.

3) Mediocre Handling On the Road

When traveling on paved roads, the Frontier does not feel sporty. The good news is that the truck’s overall ride quality is fairly impressive.

• 2018 Nissan Frontier trim levels. What you get with each trim configuration.