2016 Nissan Rogue Pros vs Cons. Should You Buy? 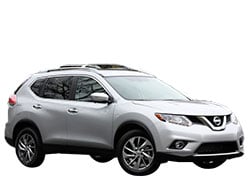 Should You Buy a 2016 Nissan Rogue? Here are the Pros and Cons

The Rogue model was initially redesigned in 2014, and maker Nissan continued selling it as the Rogue Select throughout 2015. However, the 2016 Rogue brings some additional features such as forward emergency braking and rear cross traffic alerts. Siri Eyes Free has been added to the SL model and SV Premium Package.

The 2nd-generation Rogue model is for sure a considerably better product, delivering outstanding fuel economy. In a compact crossover segment market that is increasingly becoming crowded, the 2016 Nissan Rogue comes out as a family-oriented model with some likable attributes.

Test drivers have heaped praise on the interior of 2016 Nissan Rogue and affirm that it has been outfitted with an attractive design and plenty of high-end materials.

The first thing most people will notice about this new Nissan Rogue generation is the dazzling handsome styling. The car’s interior has been finished in attractive materials of impeccable top quality and is certainly better organized.

The exterior of the 2016 Nissan Rogue, particularly the back and front ends mirror the cabin’s simple elegance.

The 2016 Nissan Rogue is offering a car interior that is adorned with high-quality, desirable options and features. These includes among others:

According to reports from test drivers, the 2016 Nissan Rogue offers a smooth ride. The car’s suspension has definitely been set up to give preference to smooth riding in comparison to sharp handling.

Critics have liked the interior of the Rogue, particularly the seats. These appear to have been inspired by zero gravity and NASA space travel. Nissan has designed the Rogue seats utilizing extra dense foam to keep you comfortable throughout long cruises.

The storage and cargo handling options offered by the Rogue deals with the challenge of storage through an ingenious system.

The Rogue excels regarding gas mileage. The Environmental Protection Agency-rated 33 mpg highway may appear quite excellent in theory, but the combined 28 mpg of either the all-wheel-drive or front-drive Rogue is even better when put to practice.

The 2016 Nissan Rogue has obtained 4 out of 5 possible stars for government tests done on overall crash protection. The IISHS has also received a “Good” rating on impact tests as well as a "Good" score for whiplash protection, side-impact, and roof strength tests.

When you step hard on the Rogue’s gas pedal, it brings into the cabin a noisy drone because the CVT tends to keep your engine rpm quite high.

The Rogue sort of feels ponderous as you go around turns, and it doesn’t do much to engage you. Some auto critics have thought the Rogue as having vague steering.

Unfortunately, according to auto critics, the rear visibility of the Rogue is somehow compromised, which makes maneuvering in tight spaces quite challenging, even with the assistance of Around View system and the standard rearview camera.

Auto writers report that the engine feels sluggish and can be noisy on the highway.

In the Rogue, Nissan made the uncommon decision of offering a 3rd-row seat. However:

If you love getting some level of driver engagement from your engine, you may not get it here. Its CVT is somewhat unresponsive, and the handling isn't that engaging. The rearward visibility is rather poor.

How It Stacks Up to The Competition:

Auto reviews have compared the 2016 Nissan Rogue against the 2016 models of Honda CR-V and the Hyundai Tucson.

Perhaps what makes this car a great choice is its ability to seat up to seven passengers when you make use of the available 3rd-row seat. This is something rare in most compact SUV models.

• 2018 Nissan Rogue trim levels. What you get with each trim configuration.