2016 Nissan Sentra Pros vs Cons. Should You Buy? 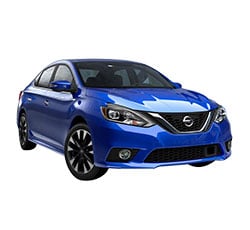 Should You Buy a 2016 Nissan Sentra? Here are the Pros and Cons

The consumers have spoken, and Nissan has mostly listened with its 2016 Sentra. The weak 1.8-liter, 4-cylinder engine in the 2016 Nissan Sentra continues to hold it back in acceleration. However, the smaller, 130-hp engine contributes to the 2016 Sentra having one of the highest fuel efficiency ratings in its class.

Many of the exterior features of the 2016 Nissan Sentra, such as the headlights and grille, have undergone an emboldening redesign. The front seats, widely reviewed as stiff and uncomfortable in the 2015 model, have been updated to be more accommodating. Nissan has also added optional power functions for the driver’s seat.

The 2016 Nissan Sentra has once again received the designation of “top safety pick” from the Insurance Institute for Highway Safety. Experts agree that this vehicle exhibits exceptional crash test performance. A strong safety rating makes this car an excellent choice for young drivers and families.

Depending on the trim selected, the 2016 Sentra can travel up to 32 miles on a gallon of fuel with combined city and highway driving. The base model with 6-speed manual transmission provides slightly lower fuel efficiency. Meanwhile, the I4 FE+ S with continuously variable transmission, or CVT, receives the best MPG ratings.

Though surprising for a compact car, the Sentra’s roomy interior is old news for anyone familiar with this make and model. Of course, being able to stretch out is always good news. The 2016 model continues the legacy, making this compact vehicle ideal for families.

Another area in which Nissan never seems to hold back is its Sentra's trunk space. The 2016 model boasts just over 15 cubic feet of trunk volume.

Owners may enjoy the extra space by

This car was made to go the distance, so its seats should, too. Fortunately, the fully adjustable front seats in the 2016 Nissan Sentra have been designed to form to the driver’s body. Front-seat heating is also an option.

A major cause of freeway car crashes is failing to check the blind spot. Not only does the 2016 Nissan Sentra constantly monitor the blind spot, but it also alerts drivers to traffic crossing behind the car. This technology gives drivers more peace of mind when backing out of a driveway or merging onto the freeway.

7) Voice Recognition for SV and Up

Hands-free calling and texting are just a few of the life-saving benefits of in-car voice recognition. Starting with the SV trim package, Nissan has focused on compatibility with Apple devices, integrating Siri Eyes Free software alongside a 5-inch touch screen and information panel. This upgrade is well worth considering for any busy professional.

Standard manual transmission is becoming rarer each passing year. For drivers who prefer to change gears themselves, Nissan has become a go-to car brand. The availability of a manual base model is especially significant in the United States as automatic transmissions have all but saturated the market.

Each year, Nissan fine-tunes its CVT even more to be more responsive and offer a smoother overall ride. With the traditional automatic, drivers can sometimes feel the gears catch at certain speeds as the system decides whether or not to shift into the next gear. CVT is also called “stepless” due to its more flexible and fluid gear ratios.

Responsive yet fluid steering is an important feature for many drivers. The steering in the 2016 Sentra just toes the line between stiff and sensitive. With average driving habits, this system makes all the right micro-adjustments based on speed and acceleration to maintain a reasonably smooth ride.

Reasons Not to Buy a 2016 Nissan Sentra – The Cons

The biggest complaint among test drivers of the 2016 Sentra is its under-powered engine. For consumers who value performance over safety and fuel economy, this vehicle falls short. In fact, taking more than 10 seconds to go from 0 to 60 miles per hour, this car is one of the slowest on the market.

Consumers with tighter budgets may be disappointed to discover that many of the Sentra’s conveniences are just out of reach for them. While price is entirely subjective, many reviewers have commented that they would like to see more of the following upgrades become standard features:

The Nissan Sentra, in general, has performed just adequately against the market for a number of years when it comes to reliability. With the 2016 model, there is little reason to expect a vast improvement in these ratings. Of course, as with any new model, only time will tell.

How the 2016 Nissan Sentra Stacks Up to the Competition:

This model is far from being the leader of the pack in the compact sedan market; the 2016 Mazda3 and 2016 Honda Civic leave the Sentra in the dust. The poor acceleration in the 2016 Nissan Sentra will most certainly frustrate frequent highway drivers.

Making the trade-off of an underachieving motor for superior safety may make the occasional frustration worthwhile in the event of an accident. The 2016 Nissan Sentra also has a number of trims and options available to improve its comfort. This car is best suited for families who simply want to travel from point A to point B safely.

• 2018 Nissan Sentra trim levels. What you get with each trim configuration.