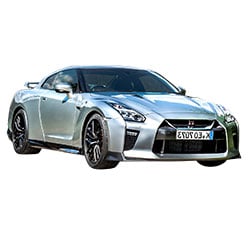 Should You Buy a 2017 Nissan GT-R? Here Are Some Reasons For and Against

For nearly a decade, the Nissan GT-R has remained one of the most high-tech sports cars in the world. It is a great choice for the car shoppers who truly have a need for speed. While the GT-R is known for its thrilling performance on the track, it is also comfortable enough to be driven on a daily basis. Furthermore, an advanced AWD system enables the GTR to overcome snowy road conditions.

The 2017 Nissan GT-R has received some noticeable styling updates. Nissan also decided to replace the GT-R’s dashboard, which was often criticized for having too many buttons.

Under the hood of the 2017 Nissan GT-R sits a turbocharged six-cylinder engine. Nissan has tuned it to develop even more power than before. It now kicks out a monstrous 565 horsepower and 467 pound-feet of torque. A 0-60 time of 3.0 seconds puts the new GT-R in an elite class of sports cars.

While there are definitely more efficient sports cars on the market, the GT-R’s overall fuel economy is quite impressive given its jaw-dropping performance. It returns 16 mpg in the city and 22 mpg on the highway. If most of your traveling is on the open road, the GT-R is efficient enough for daily commuting.

Unlike sports cars such as the Chevy Corvette, the 2017 Nissan GT-R benefits from an all-wheel-drive system. You will be able to remain on the road throughout the year. Nissan also offers a useful Cold Weather package, which includes all-season tires and a special type of coolant. This is especially good news for the drivers who live in snow-prone areas.

In terms of handling, only a few cars in the world can outperform the GT-R. A cutting-edge traction control system helps the speedy coupe to obtain a tight grip against the pavement. All versions of the GT-R benefit from adjustable shock absorbers. Whether you are enjoying a weekend drive through the mountains or competing on the track, the GT-R will always inspire a great deal of confidence.

Longtime fans of the GT-R will immediately notice its refreshed styling. It now has a more aerodynamic appearance. Not only do the larger grill openings make the GT-R look more aggressive, but they also help feed fresh air into the engine. On the rear, the GT-R’s popular taillights remain virtually unchanged. LED headlights and a set of 20-inch performance wheels come standard.

According to numerous automotive journalists, the 2017 Nissan GT-R has some of the most comfortable seats in the sports car world. They provide just the right amount of support. You will be able to take a long trip without becoming annoyed. Noise-cancellation technology helps eliminate any extra road noise. Hand-stitched leather upholstery is optional.

You can rely on the new GT-R to provide the necessary stopping power. During a 60-0 braking test, the GT-R needed only 99 feet to come to a complete stop. While the coupe’s powerful brakes will benefit everyone, they will definitely come in handy on the track. Cross-drilled rotors help prevent excessive heat buildup.

The 2017 Nissan GT-R is not the type of car that you see everyday. For good reason, true car fans immediately get excited when they spot a GT-R on the street. While the GT-R is not the most exotic-looking sports car on the market, it does demand a great deal of attention on the road. It is the perfect choice for the drivers who like to stand out from the crowd.

Despite the GT-R’s extreme powerful, it is not a difficult car to drive. Even first-time sports car owners will feel confident while behind the wheel. An advanced stability control system helps keep you out of trouble.
Buying Tip: To avoid overpaying on a new car, shop prices online first. Get up front pricing before you walk into a dealership. We recommend the following free services; Car Clearance Deals, NADAguides, CarsDirect & Motortrend.
These free services will offer you the lowest prices and supply you with multiple competing price quotes. You will know the best price before you visit the dealer.

Don’t expect the new GT-R to ride like a luxury sedan. Its lowered suspension and performance tires can cause a bit of bumpiness on rough pavement. This is especially true when traveling in the city.

Although the GT-R’s automatic transmission shifts quickly, some drivers still prefer a traditional manual gearbox. A manual transmission would give drivers a more direct connection to the available power.

The 2017 Nissan GT-R is a safe sports car. Nevertheless, you won’t find any advanced driving aids such as blind-spot monitoring and forward collision warning. This could be an issue for the car enthusiasts who desire the latest safety innovations.

Some of the GT-R’s main rivals include the Acura NSX and the Chevrolet Corvette Z06. In contrast to the Corvette, the GT-R can be driven in snowy weather. One the other hand, the GT-R packs just as much performance technology as the all-new Acura NSX.

When it comes to sheer performance, the 2017 Nissan GT-R can compete with any sports car on the market. It is perfect for the drivers who want to go from the street to the racetrack. While the GT-R is blistering fast and responsive, some drivers may prefer a less technologically advanced sports car. Prices for the new GT-R start at around $110,000. Featuring a few additional performance parts, the Nismo version of the GT-R is especially exciting.