Why Buy a 2017 Nissan Pathfinder 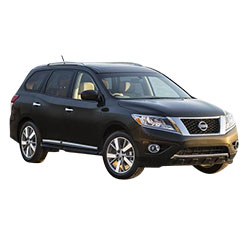 Should You Buy a 2017 Nissan Pathfinder? Here Are Some Reasons For and Against

Visit Car Clearance Deals, CarsDirect & MotorTrend.
For some car shoppers, the 2017 Nissan Pathfinder may prove to be the ideal family vehicle. It can accommodate multiple passengers while still returning decent gas mileage. All trims come equipped with the same potent engine. The three-row crossover’s easy-to-use technologies make an even more rewarding vehicle.

Nissan made a number of key improvements to the 2017 model. Not only does the SUV boast more power, but it also has an updated appearance. Furthermore, the Pathfinder benefits from an enhanced suspension system.

The Pathfinder’s previous V-6 engine was a strong performer in its own right. However, direct fuel injection helps the new version to develop even more power. Nissan tweaked the popular V Series engine to pump out an exciting 284 horsepower and 260 pound-feet of torque. When accelerating from a standstill, the midsize crossover takes only 7.5 seconds to reach 60 mph.

2. Ability to Pull a Load

Drivers will love this SUV’s overall versatility. Unlike some three-row crossovers, the 2017 Pathfinder can tow a significant amount of weight. From jet skis to horse trailers, you will be able to haul a lot of different things. The crossover's towing capacity now stands at a solid 6,000 pounds. It is a good alternative to a midsize pickup truck.

3. Good Fuel Economy for Its Class

Despite the SUV’s improved performance, it still manages to deliver the same fuel economy as before. Drivers can look forward to getting a reasonable 20 mpg in the city and 27 mpg on the highway. Nissan’s cutting-edge Xtronic transmission effectively helps the 2017 Pathfinder to conserve fuel. All-wheel drive only slightly lowers the crossover’s gas mileage.

You can expect the new Nissan Pathfinder to handle better than the previous model. Nissan installed an updated suspension that improves the crossover’s responsiveness. When traveling on a curvy road, the new model inspires more confidence. Fortunately, its comfortable ride quality remains unchanged. The steering system was also reworked to provide drivers with more feedback.

Although the 2017 Nissan Pathfinder is not an extremely rugged off-road machine, it can still handle a muddy trail. Its AWD system features a four-wheel lock function, which dramatically enhances traction in slippery conditions. Hill descent control also comes standard on the all-wheel-drive models. Even if you don’t plan to travel off-road, the AWD system gives you better grip in the snow.

Regarding appearance, the 2017 Pathfinder looks a bit tougher than last year's model. A wide V-Motion grille helps give the front-end a distinctive appearance. LED running lights now come standard. Featuring a sporty set of 20-inch wheels and LED headlights, the Platinum model has an especially commanding road presence. A slew of cool paint colors are available, including Caspian Blue and Cayenne Red.

The 2017 Nissan Pathfinder can seat up to seven people. One of the SUV’s best qualities is its accessible third-row seat. Unlike some three-row crossovers, the Nissan Pathfinder makes it easily for everyone to enter the cabin. There is also plenty of cargo space in the back, which makes the Pathfinder a great vehicle for traveling.

With a MSRP of $30,800, the base 2017 Nissan Pathfinder will tempt a lot of buyers. You will not be sacrificing any performance or comfort. A tri-zone climate control system gives the base Pathfinder an advantage over some competitors. Some of the standard tech includes an 8.0-inch touch-screen display, satellite radio, and Bluetooth connectivity.

9. Features to Keep Your Family Happy

If you want to please your children, the Tri-Zone Entertainment System is definitely a worthy upgrade. It includes two high-resolution screens and HDMI ports. The 13-speaker Bose sound system makes your journey more exciting. A panoramic sunroof and heated second-row seats are available as well.

A five-star safety rating puts the 2017 Nissan Pathfinder among today’s most secure family vehicles. Aside from the standard backup camera, you can also upgrade to a more advanced 360-degree camera system. If you fail to notice a large obstacle in the street, automatic braking technology can bring the SUV to a stop. Blind-spot monitoring is also offered.

Reasons Not to Buy a 2017 Nissan Pathfinder – The Cons

1. Some Safety Technologies, Only Available on the Platinum Model

All versions of the 2017 Pathfinder offer great crash protection. Unfortunately, the lower trim levels cannot be equipped with automatic braking technology. In order to obtain this high-tech driving aid, you must step up to the more expensive Platinum model.

Some adults will not like sitting in the third-row seat. This is especially true for your tall family members who have long legs. The rear seat is more appropriate for school-aged children and small adults.

The Nissan Pathfinder does not currently offer an automated parking system. This feature would make parking in a crowded area less of a chore. Fortunately, you can opt for Nissan's Around View Monitor camera system.

You can expect the 2017 Nissan Pathfinder to be mentioned among today's best three-row crossovers. The 2017 model's improved handling and revamped styling should intrigue plenty of new car shoppers. When equipped with the optional AWD system, the crossover becomes an even more capable family vehicle.