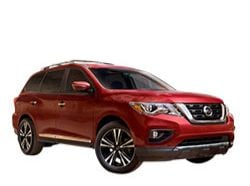 What 2018 Nissan Pathfinder Trim Level Should you Buy? What is the Difference Between Trims?

Falling between the Nissan Murano and the Nissan Armada in size, the Nissan Pathfinder is also the largest Nissan crossover. Serving as the brand’s mid-size SUV, in 2013 it was reimagined as a crossover vehicle in order to take advantage of the rising interest in the mid-size crossover models on the American market.

The new Pathfinder is a solid vehicle for the class, offering seven very comfortable seats, lots of technology with intuitive infotainment, and a strong standard V-6 engine. It does not quite measure up to the more fancy models in the segment, or some other Nissan vehicles, when it comes to material quality, but otherwise makes for a solid choice among mid-size SUVs, especially with the slew of new standard features that have been added for the 2018 Nissan Pathfinder.


Like most Nissans, the Pathfinder has a very straightforward set of four trim level options, with each one building on the previous in terms of equipment. We note the differences between the various trim levels and the optional features that each one makes available in this trim level guide, helping you select the best one for your budget and desired equipment.

Compare the 2018 Pathfinder S vs SV Trims. What is the difference?

Even at its most basic configuration, the Nissan Pathfinder has a fairly good set of equipment. The base Pathfinder S offers buyers 18-inch alloy wheels, a 284-horsepower V-6 engine with a continuously variable transmission, and an 8-inch infotainment system with USB, Bluetooth, satellite radio, and a 4-inch driver information display.

It also comes with three-zone climate control, push-button start with keyless entry, a rearview camera, and automatic emergency braking. Front-wheel drive is standard on the Pathfinder S, but it can also be optioned with an all-wheel drive system. Aside from the all-wheel drive, the two models are otherwise identical, and there are no further optional packages available for either.

The SV offers a slight improvement on the base S features. Fog lights, a remote starter, rear sonar, and a smart key are all standard equipment on the SV, as is a power driver’s seat and leather-covered steering wheel and gear shifter. The SV also offers two optional packages.

The All-Weather Package adds heating to the front seats, the steering wheel, and the side mirrors. The Technology Package is the heftier one of the two. It adds a number of active safety features, such as a blind spot warning, rear cross traffic alert, and intelligent cruise control. It also includes a tow hitch connector, a built-in navigation, and live traffic updates through the satellite radio.

Both of the two lower Pathfinder trims are definitely on the simpler end of the spectrum when it comes to mid-size crossover conventions. The base S still offers everything that most entry-level buyers would want in the segment, and stands out with its standard infotainment, V-6 engine, and the emergency braking system.

For the money, it is definitely a solid option. The SV adds some equipment on top of that, but it does come at a slight premium. Most of the added standard equipment, aside from maybe the power driver’s seat, is low impact features that are unlikely to excite drivers or potential buyers. That makes the base SV a fairly unattractive option, but that changes with the addition of some of the optional features.

Both of the optional packages offer high impact additions. The All-Weather Package is going to be a must-have for most of the drivers living in the colder parts of the country, while the Technology Package adds a number of highly useful convenience and safety features that are also popular with drivers. For drivers looking for something more basic, the S is the better option, but for buyers who plan on adding packages, the SV will be preferred.

Compare the 2018 Nissan Pathfinder SV vs SL Trims. What is the difference?

While the lower two trim levels of the Pathfinder are more mass-market in their equipment setup, the SL and the higher Platinum trim level are oriented towards the more upmarket segment. The SL includes standard leather seating, front power seats, and seat heating for both the front and rear seats.

The steering wheel is also heated, and the optional blind spot monitoring system with rear cross traffic control, smart cruise control, and navigation system from the SV are also standard. A hands-free liftgate and a 360-degree view camera are also standard features on the SL.

Beyond those basic features, the SL also offers two optional packages. The Premium Package upgrades the wheels to 20-inch aluminium ones, and adds a panoramic dual-pane moonroof and a 13-speaker Bose sound system. The tow hitch adapter is also part of this package. The other optional equipment set for the SL is the Midnight Edition.

The special appearance package is part of the series of Midnight Edition models available on many of Nissan’s other vehicles. It includes exclusive 20-inch wheels, black exterior accents, splash guards, and badging. It also comes with blacked out roof rails and mirrors, though it can’t be combined with the Premium Package, limiting the amount of optional equipment available on the model.

For those who are looking for a more upscale driving experience, the base SL model offers almost everything that one could want. The standard safety and convenience features make even the base model of this trim fairly attractive, while the Premium Package pushed it to even more upscale heights.

The only downside is that the interior trim does not quite upgrade to match the nice upholstery, making the interior a little dissonant. The Midnight Edition is slightly expensive at around $1,400 for a purely cosmetic package, but it can be a good option for those who want a little more unique look for their car.

Compare the Pathfinder SL vs Platinum Trims. What is the difference?

Topping the Pathfinder range, the Platinum trim level adds a few extras on top of the features that the SL adds. 20-inch wheels are standard, and the leather interior is upgraded to a more upscale perforated leather material. The front seats on the Platinum are also fully climate controlled, with both heating and ventilation.


The sole optional package for the Platinum is the Nissan Mobile Entertainment System Package. That adds a three-zone entertainment system that plays DVDs and can be connected to HDMI and USB inputs for video. The other option for the Platinum model is all-wheel drive, which can be upgraded to over the base front-wheel drive system.

The 2018 Nissan Pathfinder trim line can be subdivided into two segments. The more basic S and SV models focus on the lower end of the mid-size crossover market, offering buyers a good value for a seven-seat model. The additional features offered by the base SV are usually not worth the upgrade, but adding up the various optional packages for the SV can easily make it competitive as a strong mid-size model.

On the other end of the segment, the SL and the Platinum satisfy the more upper end of the market with standard leather and some nice trim pieces and high-end optional upgrades. The SL is more focused on the everyday premium features, while the optional rear-seat entertainment makes the Platinum the better choice for families.

It can also be a nice upgrade for those who like ventilated seats, but beyond those two features, upgrading the SL is probably going to be the more economical choice for most.

Buying Tip: To avoid overpaying on a new car, shop prices online first. Get up front pricing before you walk into a dealership. We recommend the following free services; Car Clearance Deals, NADAguides, CarsDirect & Motortrend.
These free services will offer you the lowest prices and supply you with multiple competing price quotes. You will know the best price before you visit the dealer.
Save Money on a 2018 Nissan Pathfinder:
Are you Shopping for a New Vehicle? Find the Best Deals with "Free - No Hassle" Prices Quotes.