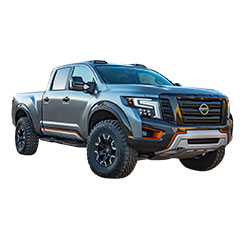 What 2018 Nissan Titan Trim Level Should you Buy? What is the Difference Between the Trims?

It takes a lot of effort for a foreign truck to break into the American truck scene, but that has not stopped the Nissan Titan from giving it its best shot. Despite its foreign nameplate, the current generation of the Titan, which started last year, was designed in California and is built in Canton, Mississippi.

The 2018 Nissan Titan is basically the same as the redesigned model that debuted last year, and offers some pretty strong features and options for a pickup truck. It does trail its main rivals in terms of its ability to tow or haul cargo though, even with the optional turbo diesel engine available on the heavy-duty Titan XD. It does make for a fairly good consumer or multi-use truck though, given its good starting equipment.

The Nissan Titan comes in one of five trim levels and, like all trucks, in one of three body configurations: a single cab two-door model that seats up to three, an extended cab - called King Cab by Nissan - that adds a small rear bench that adds storage and can seat a couple of people in an emergency, and the Crew Cab, which is basically a two-row SUV with a truck bed attached. The base models come in all of those varieties, while higher trim levels are restricted to the larger cabin types.

This guide lets you know which trims are available with each body type, as well as the equipment and options that each one offers.

Compare the 2018 Titan S vs SV Trims. What is the difference?

The basic Titan S is slightly more expensive than the average basic truck, but comes with a better set of equipment. Unlike many of the work truck models from other manufacturers, the Titan comes with a standard set of power locks and windows, air conditioning, and a 5-inch infotainment display with Bluetooth and a rearview camera, as well as keyless entry with push-button start and cloth upholstery.

It’s 18-inch wheels are steel though, and it only offers one optional package. The S Utility Package adds a tow hitch, a spray-in bed liner and an extra storage console. The S is available in rear-wheel and all-wheel drive, and is offered in all three body types.

The SV version of the Titan comes with a few extra features standard, but mainly has a better option selection than the S. The upholstery is stain-resistant cloth, there are extra chrome trim pieces on the exterior, and a trailer sway control is included. The car’s electronics also get an upgrade with a more advanced display and a satellite radio connection. Like the S, it is available with both drivetrains and all body types.

For anyone who is not looking for just a simple truck for work or to run an occasional errand that requires a flat bed, the SV is likely to be the better choice of the two entry-level trims. It includes more comfort features that people are used to, and includes important optional packages for towing and tying down cargo in the bed, both of which are the key reason consumers tend to buy entry-level trucks. The parking sensors and the blind spot monitors also make it easier for drivers used to smaller cars to jump into the Titan and drive it confidently.

Compare the 2018 Nissan Titan SV vs Pro-4X Trims. What is the difference?

The Pro-4X is the Titan off-road trim, and it is only available in the King Cab and Crew Cab configurations, as well as being limited to all-wheel drive only. It comes with all of the off-road gear one would expect, including giant tires, Bilstein shock absorbers, skid plates, tow hooks, a locking rear differential, a two-speed transfer case, and hill descent control.

Off-road enthusiasts will like what Nissan has to offer with the Pro-4X, and it can be quite a bit cheaper than many other off-road specialty trucks. It has little to add for those not into off-roading aside from the looks though, as all of its comfort and convenience features are available for a lower price point on the SL model as well.

Compare the Titan Pro-4X vs SL Trims. What is the difference?

The Titan SL is the premium version of the truck, and comes exclusively in the Crew Cab configuration, though both rear-wheel and all-wheel drive are available, unlike on the Pro-4X. It comes with standard leather seats, a remote starter, and the Rockford Fosgate audio. The side mirrors are heated and powered, as are the front seats. Parking sensors and the 20-inch wheels, as well as the Utili-track and the other bed upgrades are also included on the SL model.

The Titan SL can be equipped with a tow package, and one of three appearance packages. The Tow Package is the same as on the earlier models, except with chrome accents on the tow mirrors. The Chrome Package adds chrome accents to the grille, exhaust, and the wheels. The Texas Edition does the same, except with the addition of Texas badging. The last appearance package is the Midnight Edition, which is the same as the SV version.

Those looking for an upscale truck will find it on the Titan SL. It has quite a few nice features and is a comfortable vehicle to find yourself in. It is at this level that Nissan’s infotainment system begins to feel dated though, as there are no good smartphone integration functions available - something one would expect from a premium truck.

Compare the Titan SL vs Platinum Reserve Trims. What is the difference?

Building on top of the SL trim level, the Platinum Reserve is the highest of the Titan trim levels. Premium two-tone leather upholstery covers the model’s seats, all of which are heated. The steering wheel is also heated, and the front seats are cooled. Pretty much all of the optional features from the lower trim levels are standard here, outside of the appearance upgrades.

It comes with only two optional packages of its own. The Mobile Entertainment System Package adds a dual-screen rear seat entertainment system, and the Platinum Reserve Utility Package adds built-in boxes for the bed and an electronic tailgate lock. As with the SL, the Crew Cab is the sole option, and rear-wheel and all-wheel drive are both available.

The Titan Platinum Reserve is a pretty good truck, though an expensive one. Fully equipped, it comes out to a bit over $60,000, which puts it on par with high-end trucks from most of its competitors, which often come with better equipment and stronger engines in that price range. That serves to limit the usefulness of the Platinum Reserve upgrade. It is quite nice, but dated in its technology compared to most competitors.

Despite its recent update, the 2018 Nissan Titan still feels a little behind the time when it comes to high-end equipment, but it does very well with its lower-grade models. The S and the SV are both equipped with better gear than similar models from other manufacturers, making this a good truck for buyers looking for something that is inexpensive but not utilitarian the way other entry-level trucks are.

The Titan S and the Titan SV models perfectly satisfy that requirement. The Pro-4X is also an inexpensive off-road specialist truck, which can make it a good deal for the right kind of enthusiast.

For the SL and the Platinum Reserve models though, the competition offers too many better alternatives at close prices. Most buyers looking at the Titan are likely to find their best value on the SV trim level for those reasons.

Save Money on a 2018 Nissan Titan:
Are you Shopping for a New Vehicle? Find the Best Deals with "Free - No Hassle" Prices Quotes.