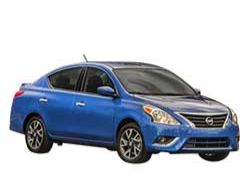 What 2018 Nissan Versa Trim Level Should you Buy? What is the Difference Between the Trims?

Among the least expensive vehicles currently available in the subcompact class, the Nissan Versa, in both its standard sedan and the Note hatchback versions, is entirely oriented at buyers focused on value. For that reason alone, it is by far the most popular subcompact vehicle currently sold in America. It also offers a fairly spacious cabin that can fairly comfortably accommodate adults in both front and back seats - a rarity in the subcompact class - as well as a large trunk.

While the most expensive of the Versa models does not cross the $20,000 mark in its price, choosing the right one from its variety of trim levels is an important consideration, as some of the most basic models can lack some of the key features that are considered by many buyers as key requirements. Conversely, the higher-end models may contain some features that may be unnecessary to some, reducing the excellent value that this car offers.

This guide is designed to make shopping for a new Nissan Versa easier by breaking down all of the different trim levels available and explain the key features that each one offers. With this information in hand, selecting the perfect Nissan Versa becomes a much easier task.

Compare the 2018 Versa S vs S Plus Trims. What is the difference?

The base model for both the sedan and the hatchback model of the Nissan Versa is the relatively simple Versa S. As the least-expensive of the Versas, it is also the least-equipped, though drivers will find a number of the basics covered. Air conditioning is a standard feature, as is the cloth interior, 15-inch steel wheels, and a four-speaker audio system with a CD player, an auxiliary input, and Bluetooth.

Besides those, however, the Versa S is pretty basic. Locks and windows are manually controlled, and there are no LCD screens or cruise control on the model. The sedan model of the Versa S comes equipped exclusively with a manual transmission, while the more expensive Versa Note hatchback includes an automatic transmission.

Neither model comes with any notable packages or upgrade options, though a number of usual accessories like splash guards and alloy wheels are available on both models. The hatchbacks can also be equipped with a spoiler and a Rockford Fosgate speaker system.

The S Plus is a sedan-only trim level for the Versa, and its main upgrade is the continuously variable automatic transmission, which is the same as the one on the hatchback S model. The S Plus sedans also come with a rear spoiler and cruise control. Otherwise, they are identical to the regular S model in features.

The Versa S sedan is incredibly cheap for what it is, even if it only comes with a manual transmission. For drivers after really inexpensive transportation, there are few choices that can come close to the same value.

However, for drivers who are not on a very tight budget, the S Plus sedan is likely to be the better choice than the regular S sedan, as the automatic transmission comes with some mileage improvements and the cruise control makes highway driving so much easier. On the Versa Note, the S Plus model is not available, likely because its main feature - the automatic transmission - is already included on the hatchback models.

For cruise control, hatchback buyers have to upgrade to the higher SV model, which comes with a number of other upgrades over the base S hatchback as well. It should be noted that while the S hatchback offers more features than the S sedan, it is also significantly more expensive than the S sedan and slightly pricier than the better-equipped S Plus sedan.

In general, unless the hatchback is the preferred body style, the sedan version of the Versa comes with a better value relative to its features.


Compare the 2018 Nissan Versa S and S Plus vs SV Trims. What is the difference?

The SV is the midrange model of the Versa lineup and, just like the base S, available in both sedan and hatchback configurations. Both models get a slightly nicer cloth upholstery and power features, including keyless entry and power locks and windows. A trip computer and a USB port are also added in both configurations.

In addition to that, the hatchback SV model also gets an upgraded audio system with a 5-inch screen, albeit with no touch capacity, a rearview camera, satellite radio, Bluetooth audio streaming and Siri Eyes Free functionality. The hatchback also adds cruise control over its S model, as there is no S Plus hatchback version of the Versa.

While this model of the Versa may not have the same impressive value that the entry-level Versas do, it has many more of the features that modern buyers consider necessary on their cars. The power doors and windows, as well as keyless entry, are practically industry standards these days, as is USB connectivity. The hatchback version of the SV takes these principles even further by adding an LCD screen for its infotainment and adding a rearview camera. However, as with the S model, it is also significantly more expensive than an otherwise-similar sedan.

Compare the Versa SV vs SV Special Edition Trims. What is the difference?

The SV Special Edition is the highest sedan trim level for the Nissan Versa, now that Nissan has gotten rid of the previous top-end SL trim level. The Special Edition sedan comes with many of the upgrades that were included on the hatchback version of the SV but not the sedan one. That includes the rearview camera, the 5-inch display screen, and the upgraded audio system with Bluetooth audio streaming and satellite radio. It also comes with aluminium wheels, fog lights, and a number of exterior chrome accents. Inside, it also gets a few upscale touches like a leather-trimmed steering wheel.

For most buyers who have already decided on getting at least the SV sedan version of the Versa, the Special Edition is an easy high-value upgrade. At just a $500 premium over the regular SV sedan, it adds a significant amount of useful equipment such as a rearview camera, as well as a more modern infotainment system. It also looks a lot less like the budget model that the Nissan Versa is, which adds a bit of visual appeal to the trim level. As far as the more expensive trim levels of the Versa are concerned, this one offers a fairly solid value.

Compare the Versa SV vs SR Trims. What is the difference?

The SR is the highest trim level available for the Versa Note hatchback. It is a sportier and more premium version of the SV hatchback, and it includes aluminium wheels, special side sills and spoilers. It also includes a few appearance features from the sedan-exclusive SV Special Edition like front fog lights and a leather-covered steering wheel. It also has integrated turn signals on the outside mirrors, and an exclusive upholstery made from synthetic suede and accented with orange stripes and stitching. Like all other Nissan Versa models, there are no optional packages for the SR Versa Note.

Unlike the premium sedan model SV Special Edition, the SR brings little in terms of comfort and convenience equipment and is more concerned with creating the illusion of a performance hatchback variant. The SR comes with the same engine and transmission as the rest of the Versa lineup, which is nothing to write home about. Similarly, the suede interior does not feel like much of an improvement over the upgraded cloth upholstery of the SV. For all buyers aside from the ones that find the unusual styling and color scheme of the SR attractive, the SV makes an overall better choice and a better value than the SR.

The 2018 Nissan Versa is very clearly a budget vehicle, a direction that Nissan confirmed when they cut the premium model of the Versa out of the lineup. As such, the lower-cost models offer the best return on investment among the Versa lineup.

For buyers looking for a bargain, the S and the S Plus models offer a great back-to-basics driving experience at a price that is thousands of dollars less than most competitors. The SV is a more well-rounded modern car, albeit without the fancy touchscreens or advanced safety features that are popular today.

The high-end models are less attractive due to approaching their better-equipped competitors in price, but can still be a good choice in the case of the SV Special Edition on the sedan. Almost everyone will probably want to pass on the strangely outfitted Versa SR hatchback however.

Save Money on a 2018 Nissan Versa:
Are you Shopping for a New Vehicle? Find the Best Deals with "Free - No Hassle" Prices Quotes.