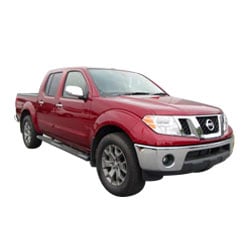 What 2019 Nissan Frontier Trim Level Should you Buy? What is the Difference Between Trims?

Over the years, the Nissan Frontier has not received any major mechanical changes. It has also only undergone subtle styling updates. Nevertheless, a tough-nosed design and a reputation for being reliable have helped this midsize pickup truck to remain competitive. Adventure seekers will also enjoy the Frontier's legendary off-road capabilities. Although fuel economy may lag behind the competition, most drivers won't find this issue to be a dealbreaker.

To make the Frontier feel more modern, Nissan has added a standard 7.0-inch infotainment screen to the S and SV trims. The popular Midnight Edition appearance package also remains an option for the 2019 model year. Let's see how the available Frontier trims differ from each other.

Compare the 2019 Frontier S vs SV Trims. What is the difference?

A low starting price makes the Frontier S an especially good buy. Under the hood sits a four-cylinder engine, which develops an adequate 152 horsepower and 171 pound-feet of torque. If you're looking to save the most money, stick with the standard five-speed manual transmission. Adding the optional five-speed automatic transmission will costs you an extra $4,000. A more powerful V6 engine and four-wheel drive are available as well.

The base Nissan Frontier S comes with an extended cab. However, you can upgrade to a more spacious crew cab for an additional cost. Old-school manual windows and door locks give the Frontier a retro feel. While the Frontier S may not be luxurious on the inside, it does come loaded with enough features to keep you satisfied. You'll especially appreciate the standard 7.0-inch touch screen, which replaces last year's basic 5.0-inch infotainment display. Some of the other standard equipment includes Siri Eyes Free voice command, a backup camera, and Bluetooth.

While the base Frontier S is unlikely to blow anyone away with its styling, it does have the look of a traditional pickup truck. A set of 15-inch steel wheels come standard. If you plan to use the Frontier S for work use, get the optional Work Truck package. It comes with tough upgrades like a spray-in bedliner and rubber floor mats.

Don't expect the Frontier SV to deliver much more luxury than the base Frontier S. However, it does boasts power windows and locks. You'll also enjoy satellite radio and a sliding rear window. Crew cab models offer an optional sunroof.

A Value Truck package is also optional on the Frontier SV. It decks out the interior with a greater number of creature comforts. While dual-zone automatic climate control and heated fronts provide a greater degree of relaxation, rear parking sensors help with maneuverability in congested spaces. A six-speaker stereo system and an auto-dimming rearview mirror are included as well.

Along with the Value Truck package comes some worthy towing and hauling accessories. When transporting long items, the sliding bed extender is bound to come in handy. Other upgrades include adjustable cargo tie-downs and a Class IV trailer hitch.

A set of 16-inch alloy wheels and a body-color front bumper add just a bit more flair. You can also take advantage of the sharp-looking Midnight Edition appearance package, which is available on the crew cab version. It equips the Frontier SV with a set of blacked-out 18-inch wheels and black exterior trim.

Compare the Frontier SV vs Desert Runner Trim Levels. What is the difference?

Unfortunately, four-wheel drive is not offered on the Desert Runner trim. You also can't get the previously mentioned SV Value package. However, the powerful V6 engine does come standard.

Compare the Frontier Desert Runner vs Pro-4X Trims. What is the difference?

If you're looking for a machine that can handle the toughest of conditions, check out the Frontier Pro-4X. In terms of off-roading, it's the most capable trim in the lineup. It comes standard with the Desert Runner's Bilstein off-road shock absorbers and four-wheel drive. While a locking rear differential helps promote the optimum traction on slippery terrain, skid plates provide the truck's undercarriage with an extra barrier of protection.

When doing a side-by-side comparison of the Frontier Desert Runner and the Frontier Pro-4X, you won't notice any big differences in exterior styling. However, there are a few contrasts on the inside. A smaller 5.8-inch touch screen with navigation comes in the Frontier Pro-4X. Crew cab versions of the new Frontier Pro-4X provide a 10-speaker Rockford Fosgate audio system.

Compare the 2019 Frontier Pro-4X vs SL Trim Levels. What is the difference?

While the Frontier Pro-4X is designed for tackling rugged trails, the Frontier SL is for the drivers who plan to spend most of their time on the street. It comes without the Pro-4X trim's off-road gear. You'll enjoy all of the available niceties, including the features found in the Pro-4X Luxury package.

Remember, you can only get the range-topping SL trim as a crew cab. The Frontier SL also has a more upscale appearance. Chrome exterior trim and 18-inch aluminum-alloy wheels come standard. Running boards also make it easier for passengers to climb aboard.

The base 2019 Nissan Frontier S is currently the most affordable pickup truck in America. If you simply want a tough truck that's built to last, you shouldn't have any complaints about what the Frontier S brings to the table. To save the most cash, choose the standard five-speed manual transmission. Nissan has made the automatic transmission a pricey upgrade. Some of the important features include a 7.0-inch touch screen, Bluetooth, and a backup camera. Although you'll have to manually roll down the windows, this shouldn't be an issue for most truck enthusiasts.

Power windows and locks make the Frontier SV feel more modern on the inside. For an extra $1,890, you can get the optional Value Truck Package. It brings niceties like heated fronts seats and rear parking sensors.

If you have no intentions of traveling off the beaten path, the Frontier SL may prove to be your best option. Not only does the SL trim have an upscale appearance, but it also comes loaded with premium features.

If you don't plan to do a lot of heavy-duty towing, the base four-cylinder engine should get the job done. However, expect to experience slow acceleration. Drivers find the available V6 engine to be a lot more fun. It packs 281 pound-feet of torque, which helps the Frontier to tow up to 6,500 pounds. Of course, you can't overlook the enhanced performance. While the four-cylinder models can return a combined 21 mpg, the V6-powered Frontier can deliver a combined 19 mpg. In contrast to some of today's other pickup trucks, the 2019 Nissan Frontier continues to offer a manual transmission.

Aside from the Frontier Desert Runner, all of the other trims can be equipped with a 4WD system. It will enable you to confidently handle mud-soaked trails. However, no other trim in the lineup can match the Frontier Pro-4X's off-road prowess. Whether you're driving through a swampy riverbed or touring the Rocky Mountains, this truck is tough enough to overcome the challenging environment.

The Nissan Frontier's standard 7.0-inch touch screen is very easy to use. However, Apple CarPlay and Android Auto are not included. In order to connect their smartphone, drivers have to do so via Bluetooth integration. If you get the available navigation system, you will be downsized to a 5.8-inch display.

When it comes to safety technology, the 2019 Nissan Frontier is light years behind the pack. While a backup camera comes standard, rear parking sensors are optional. You won't be able to get the Frontier with advanced driving aids like blind-spot monitoring and forward collision alert.

Two different body styles are available for the 2019 Nissan Frontier. The extended cab is perfect for the drivers who don't need to accommodate extra passengers. You can fold up the rear seats to provide more cargo space. While the more spacious crew cab is friendlier towards families, it's still a bit short on legroom. This is especially true for adults who are over six feet tall.

Most people are pleasantly surprised by the sound quality of the standard stereo system. It produces a decent amount of bass and doesn't have much distortion. However, the available Rockford Fosgate premium audio system will satisfy pickier music fans. It provides a total of 10 speakers, which are powered by a high-output amplifier. The entire cabin will be filled with crisp sound. Sealed subwoofer enclosures ensure a controlled bass response.
Save Money on a 2019 Nissan Frontier:
2019 Nissan Trim Level Buying Guides: