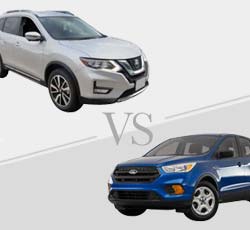 The Ford Escape and the Nissan Rogue are both excellent options for anyone looking for a compact SUV. Each of the vehicles has had some time to establish itself as a contender in the market, and the 2019 models come with high-tech features and capable components under the hood. There are five trims on the Rogue and four on the Escape, giving customers plenty to choices for more customization.

These two vehicles are respectable in performance. The Rogue is definitely more suited for everyday commuting and road trips than pulling heavy loads or doing serious off-roading. The Escape does a better job of handling itself in tough conditions. This is especially true with the high-end Titanium model since it has with a bigger engine.

On the Nissan, Hill Start Assist makes it easier to accelerate out of a stop when the vehicle is on an incline. The Xtronic continuously variable transmission comes with a sport mode shifter so drivers can feel even more in control over the engine performance.

The Rogue's numbers are on par with those in the base model of the Ford Escape. The Escape's 2.5-liter iVCT engine puts out 168 horsepower. When moving up to the SE and SEL trims, the engine shifts to a 1.5-liter EcoBoost that gets 179 horsepower. This engine has automatic start and stop to prevent needless gas consumption during idling. That automatic start and stop function is also present in the Escape Titanium, which runs on a 2.0-liter Twin Scroll EcoBoost engine that goes all the way up to 245 horsepower.

The Twin Scroll engine can hold its own in terms of towing capacity. It can pull up to 3,500 pounds when the SUV is outfitted with the appropriate trailer tow package. On the SE and SEL, towing capacity is still pretty strong compared with the rest of the compact SUV market, at 2,000 pounds. The base S model has a towing capacity of 1,500 pounds, which is much closer to the approximately 1,100 pounds that the Rogue can haul.

Each of these Ford engines works with a six-speed automatic transmission with SelectShift Capability. Curve and traction control, along with roll stability control, are standard options that help with maintaining stability.

For all of the Rogues, AWD is an option. The Escape, on the other hand, only has the 4WD option on the SE, SEL, and Titanium trims.

Fuel economy is an important consideration for many drivers. The Rogue gets an estimated 26/33(city/highway) mpg in FWD vehicles and an estimated 25/32 mpg in AWD vehicles. The hybrids do better, at 33/35 mpg with FWD and 31/34 with AWD.

Both vehicles feature anti-lock brakes that are built to keep people from skidding when they depress the brakes. The Nissan has electronic brake force distribution and an intelligent engine braking for smoother and safer deceleration. In the Ford, there is a brake assist system to achieve the same results.

Those numbers are somewhat bigger than those seen in the Escape. The Escape has 34 dedicated cubic feet of cargo space and 68 cubic feet of storage capacity when the back seats are lowered. This makes sense, given that it measures 178" x 75" x 66", making it just a touch smaller than the Rogue. Front leg room is nearly identical to that of the Rogue, at 43.1 inches. In the back, things are a little tighter, with 37.3 inches of leg room for passengers.

For this type of vehicle and from these brands, drivers expect certain things like power windows and locks, cruise control, effective climate control, interior lighting, and cup holders. They'll certainly get all of those things in either the Rogue or the Escape.

A few differences in trim are that the SL and SV trims on the Rogue have push button starts, remote engine start systems, adaptive cruise control, and auto-dimming rearview mirrors. The S has a six-way adjustable driver's seat and a four-way adjustable front passenger's seat, both manual. The other trims have heated and power adjustable front seats and leather-appointed seats in both rows.

In the Escape, there are more differences given the four distinct trims of the SUV. The S has basic features like a single temperature zone versus a dual-zone automatic system that the other trims have. The other trims come standard with remote start, intelligent keyless entry, and push-button start. Little details like chrome door releases levers and optional panoramic moonroofs can make an impact on the cabin's overall design.

Given that technology is king in this era, it's important to take a look at the infotainment systems in both vehicles. The Rogue includes Apple CarPlay, Android Auto, Bluetooth, and SiriusXM Radio capability as standard features. The audio system either comes with four, six, or nine speakers depending on the trim. That nine-speaker system is made by Bose and includes dual woofers, making it ideal for anyone who appreciates high quality sound.

In addition, the Rogue has an auxiliary input jack, two USB ports for charging and connecting, steering wheel-mounted controls, and volume control that can automatically adjust for speed. All the music playback and smartphone integrated controls can be accessed through the touchscreen. Voice recognition and built-in navigation are included on the higher trims.

The Escape starts out with a six-speaker system in the S and moves up to a 10-speaker Sony system in the Titanium. The integration with smartphones is done through the SYNC system. Phone calls can be made, and downloaded music can be played through the vehicle.

On the SE and all the higher trims, the SYNC 3 system is included along with FordPass Connect and SiriusXM Satellite Radio. SYNC is a voice-activated system that connects with a phone, and SYNC 3 does more by bringing in Amazon Alexa and Android Auto. FordPass Connect lets the vehicle act as a WiFi hotspot and ensures up-to-the-minute traffic information when navigation is activated. It also gives drivers the opportunity to monitor their vehicle even when they're not in in it, through the use of a downloaded FordPass app. In the Titanium, the integrated navigation system is voice activated.

To keep drivers aware of what's behind them, Nissan has built the Rogue with a rearview monitor. It's upgraded to an Intelligent Around View Monitor in the SL, giving people greater perspective when making their way around tight spaces.

As would be expected, a full suite of air bags is included on the Rogue, including in roof-mounted and side-impact components. The Escape has a similar airbag system, ready to activate in case of any impact. The side-impact airbags are built as part of a safety canopy system that can come into play in a rollover or hit from the side.

The Rogue comes standard with a blind spot warning system to indicate the presence of other vehicles as well as an intelligent lane intervention feature that keeps vehicles centered. Other standard features are automatic emergency braking with pedestrian detection and rear cross-traffic alert, both of which are intended to alert people or even take over if a collision is predicted. With the higher trims, there is also rear automatic braking that can come in handy when you can't see what's behind you very well.

With Ford vehicles, the driver-assistance package is all part of the Ford Co-Pilot 360 suite. It includes a backup camera that turns on when the vehicle is in reverse, automatic high-beam lights, and a driver monitoring system. In addition, there is a lane keeping assist feature, a blind-spot monitoring package that includes rear cross-traffic alert, and automatic emergency braking. That emergency braking, like with the Rogue, can detect pedestrians in a path and take corrective action.

However, not all the Escapes have all of these advantages. The S only has a rearview camera, and the other trims come with the option to include those premium features rather than having them as standard components.

Security is often tied in with safety, and the Escape SEL and higher trims have the door keypads that the brand is known for. Specifically, it's a SecuriCode keyless-entry keypad. These vehicles also come with perimeter alarms that work to prevent theft or tampering.

For both models, it's relatively straightforward since there aren't too many trims to overwhelm the decision-making process. It's basically a low, middle, and high range of interior and exterior components. The notable factor with the Ford Escape is the change in engine. Drivers considering the Escape will have to consider the performance aspect as well as convenience, comfort, and technology.

If brand loyalty doesn't affect whether a driver purchases a Rogue or an Escape, it can come down to several differences. The Rogue is slightly bigger, making things more comfortable for carrying gear and passengers, while still getting better gas mileage on average. The Escape is more rugged than its competitor and can be used to haul equipment; it can be thought of as a little brother to the capable Explorer, which is very much at home in more extreme situations. With tech, Ford is hanging on to its SYNC system, and while that's easy to use, some customers may prefer to have the standard Android Auto or Apple CarPlay they've become accustomed to. Overall, the two are similar on many levels, so it comes down to whether one prefers the style of the Nissan Rogue or the more powerful feel of the Ford Escape.