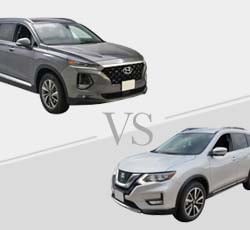 If you're looking for a compact SUV, the good news is that there are a lot of options, as this type of vehicle has become very popular in recent years. The Nissan Rogue and Hyundai Santa Fe are both practical choices if you'd like to get something affordable, reliable, and still packed with many performance and convenience features. They offer great value, and because they come in multiple trims, there's something for many types of buyers. The Rogue has five different options - the S, SV, SV Hybrid, SL, and SL Hybrid. The Santa Fe gives you a few more choices; its trims are the SE, SEL, SEL Plus, Limited, Limited 2.0T, Ultimate, and Ultimate 2.0T.

For 2019, the Nissan Rogue runs on a 2.5-liter four-cylinder engine with 170 horsepower and 175 pound-feet of torque. On the hybrids, you'll be powered by a 2.0-liter four-cylinder engine along with an electric motor. They work together to get you a net of 176 horsepower and 141 pound-feet of torque. The difference in power is basically negligible, so you'd make your decision based on preferred efficiency rather than capability. On any trim level of the Nissan, you can choose either front-wheel drive or intelligent all-wheel drive.

On a single gallon of gas, expect to travel 29 miles with FWD and 27 miles with AWD. The hybrids do better, as they've been able to jump over that 30 mpg hurdle that many SUVs struggle to conquer. The hybrid FWD Rogue can achieve a combined 34 miles per gallon, and the AWD is only a bit behind, getting an estimated 33 miles for every gallon.

Two engine choices are available on the Santa Fe, and both use direct injection for maximum efficiency. The standard engine stands pretty even with compared with the one in the Rogue. It's a 2.4-liter inline four-cylinder model that comes with 185 horsepower and 178 pound-feet of torque.

The other is an inline four-cylinder turbo with a displacement of two liters. It's significantly more powerful, capable of achieving 235 horsepower and 260 pound-feet of torque. For performance fanatics, this would be a key factor in whether you'd favor the Santa Fe over the Rogue.

The difference between the two Hyundai engines is evident when you compare towing capacity. The standard models can pull up to 2,000 pounds, whereas the turbo models can pull up to 3,500 pounds. In a big contrast, the Rogue can only haul 1,102 pounds. This would be a big consideration if you're going to occasionally bring a trailer along with you. The Rogue is simply not built for the heavy lifting, whereas the Santa Fe can do double duty as a family vehicle and something to use for work.

Mileage on the Santa Fe isn't the best, but it's certainly comparable to other compact SUVs like the Rogue. With FWD and the standard engine, you'll get a combined 25 mpg; this goes down to 23 mpg with AWD. The Turbo engines can either get a combined 22 mpg with FWD or 21 mpg with AWD.

On all trim levels of the Hyundai, front-wheel drive is standard and HTRAC all-wheel drive is optional. The engines are paired with eight-speed automatic transmissions, and the "Idle Stop & Go" system cuts down on gasoline use while you're not in motion.

Both the 2019 Rogue and Santa Fe have a hill start assist feature. If you're stopped at an incline, the brakes will hold during the time you have to transition your foot to the gas pedal when it's time to accelerate. This prevents you from slipping back and having to rev the engine so quickly and abruptly to move ahead.

The Rogue is pretty comfortable, even for adult passengers in the back. Leg room in the front is 43 inches and 37.9 inches in the rear. Behind those back seats, you'll find 39.3 cubic feet of cargo room. That expands to 70 cubic feet when they're folded down. Interestingly, because of the battery pack and different layout of the hybrid, cargo capacity is either 27.3 or 61.4 cubic feet depending on whether the second-row seats are up or down.

The Rogue S has a six-way adjustable driver's seat, and that gets an upgrade to an eight-way power driver's seat in the other trims. Likewise, on the S as well as the SV, the front-passenger's seat is manually adjusted. It gets enhanced to a power seat on the SL. Those front seats come heated on the SV and SL. The back row is built with a 60/40 configuration, but on the SL, you could also arrange things to have a pass-through between the seats.

Whether you're in the front or the back of the Santa Fe, you'll have enough room to be comfortable. Leg room up front is 44.1 inches, and it's 40.9 inches in the back. Behind the second row of seats is 35.9 cubic feet. When you're planning on transporting larger items, lower the back seats to create a total of 71.3 cubic feet of cargo room.

Assisting with comfort in the Hyundai are adjustable seats. The base model has a six-way adjustable driver seat, and all the other trims have eight-way power driver's seats. Starting with the SEL, front seats are heated, and the Limited and above also have eight way power passenger's seats. Rear seats have the 60/40 split bench configuration, and they do give rear passengers the option to recline.

In terms of technology, the two SUVs have similar advantages. The Nissan includes Apple CarPlay and Android Auto, a big plus in today's competitive market. It also comes with an advanced display so you can keep an eye on performance and a seven-inch touchscreen. Through the touchscreen, get directions (with integrated navigation that comes standard on the SL and is an option on the SV), play your music, make phone calls, and more. The screen also projects the video feed from the rear camera while you're backing up.

Four speakers are the standard set-up on the Rogue, and that increases to six speakers on the SV and nine Bose speakers on the SL. The vehicle is ready for SiriusXM radio, and steering wheel-mounted controls can make it more convenient to control playback.

The Hyundai also has Android Auto and Apple CarPlay for standard smartphone integration. With the exception of the base model, the Santa Fes are ready for SiriusXM radio. Bluetooth capability allows for hands-free calling, and steering wheel-mounted controls let you keep your hands on the wheel.

Other things you'll see on all trims of the Santa Fe are remote keyless entry and smart cruise control, a system that adjusts to changing traffic patterns and maintains proper distance with the car in front of you. On the SEL and above, you'll have proximity key entry that comes with a convenient push button start in addition to a seven-inch LCD display to keep you updated on vehicle performance.

On the Rogue, only the SL has intelligent cruise control. Both the SL and SV trims have push button starts, remote engine start systems, and an intelligent keyless entry.

The basics are all included in both of these models. Anti-lock brakes, electronic brake assist, and a full set of airbags are built-in to these SUVs to help people stay safe. In case of an accident, they have crumple zones that can absorb the impact, hopefully keeping it away from affecting passengers too significantly.

Other advanced systems include electronic stability control and traction control. These give the vehicles the ability to make instant adjustments to improve handling on the road. They make it much less likely for the tires to lose their grip with the asphalt.

Nissan has built in blind spot warning, intelligent lane intervention to keep you in line, automatic emergency braking with pedestrian detection to avoid front collisions, and rear cross-traffic alert into all of its 2019 Rogues. Rear automatic braking is included in all the trims except the base level.

Many driver-assist features are found on the Hyundai. Starting at the base level, you'll be able to take advantage of blind-spot monitoring and avoidance assist, rear cross-traffic caisson-avoidance assist, forward collision avoidance with pedestrian detection, lane keeping assist, and driver attention warning. At the SEL plus, the third trim level, you'll also get to use a parking distance warning system to make it easier to back into tight spots and a rear occupant alert that will let you know if kids or animals have been left in the back seat.

The two SUVs are very competitive in terms of pricing. There are five versions of the 2019 Rogue, beginning with the S, priced at $25,020. The SV is the next level up and is priced at $26,440. For that trim, you'll get rear automatic braking, a remote engine start system, and a motion activated liftgate. There is also a SV hybrid with a starting MSRP of $27,700.

The SL is the highest trim on the Rogue. The SL starts at $31,490, and it's hybrid counterpart costs an estimated $31,640. At this level, you'll get 19" aluminum-alloy wheels, integrated navigation, and leather-appointed seats. The SL Hybrid includes an Intelligent Around View Monitor so you can more easily keep an eye on your car.

Starting at $24,500 is the SE trim of the Santa Fe, with the SEL being priced slightly higher at $25,850. At the SEL Plus, more comforts are included for a higher price, such as Infinite Premium Audio and a hands-free smart liftgate; it's estimated price is $28,050.

There are four additional trims on the Santa Fe. The Limited, which has a panoramic sunroof and LED lights, starts at $30,100, and the Limited 2.0T, which runs on 19" alloy wheels and has LED turn-signal indicators built into its side mirrors, starts at $31,700.

Go for the Ultimate or Ultimate 2.0T versions if you want the highest quality.
The Ultimate starts at $32,950, and the Ultimate 2.0T starts at $34,600. In these SUVs, you'll definitely notice a change in how the car feels. They have eight-inch touchscreens with navigation, wireless charging, ventilated front seats, heated rear seats, and heads-up displays. The Ultimate 2.0T even has a surround view monitor for a 360-degree perspective, similar to Nissan's Around View Monitor.

In a head-to-head at the base level, it's hard to say whether the Rogue or Santa Fe comes out on top. The Rogue does get better mileage, but they're both competitive in the areas of power, comfort, and technology. They're even priced at about the same level. The bigger differences are seen at the higher trims, and here the Santa Fe pulls out ahead. With the Limited and Ultimate, it offers high-end features that the Rogue doesn't, and the turbo options are a big reason why many people might purchase the Santa Fe.
Did you find this article useful?
Please rate this page. Select a star rating from 1 to 5 below: