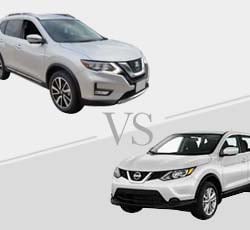 2019 Rogue vs Rogue Sport - How do they stack up? What are the differences?

The Nissan Rogue and the Nissan Rogue Sport might sound like the exact same vehicle, but they certainly do have their differences. They do have quite a few things in common though, which might make it tough for buyers to choose between these two SUVs.

These are both small SUVs, so there are certain things that drivers are going to expect from them, including a good deal of space. And spaciousness is a forte in both vehicles. However, drivers might find themselves feeling disappointed by the lackluster performances from the engines on each of these vehicles.

There are also price differences to consider. So, which one presents the better overall deal? It is time to look more into the details and find out whether the 2019 Nissan Rogue or Rogue Sport is the smarter buy.

Finding a small SUV with a strong powertrain is imperative for most new vehicle shoppers. Getting a lot of output meshed with a decent fuel economy is what many buyers want. However, they might find themselves somewhat disappointed by both the 2019 Nissan Rogue and Rogue Sport.

The 2019 Nissan Rogue is powered by a standard 2.5-L 4-cylinder engine, which generates 170 hp and 175 lb-ft of torque. This engine is matched up with a continuously variable transmission (also known as a CVT) and front-wheel drive. All-wheel drive is available as an option. There is a Hybrid model with a modest 2.0-L engine and electric motor, which together make 176 hp. This can be found on only the SV and SL trim levels.

Unfortunately, the 2.5-L engine is the vehicle's biggest downfall. It only gets the Rogue from 0 to 60 mph in about 10.1 seconds. While the engine performs okay when scooting about at slower speeds, on the highway, it just does not stack up to the competition.

The 2019 Nissan Rogue Sport is powered by a standard 2.0-L engine. This engine is able to muster up 141 horsepower and a modest amount of torque (147). It is also paired with a CVT and has front-wheel drive. All trims can be equipped with all-wheel drive instead.

Like the Rogue, the Rogue Sport's engine is vastly underpowered. The Rogue Sport gets from 0 to 60 mph in 10.2 seconds, which is one of the most sluggish performances in its class. It takes a lot for this vehicle to make it up to speed on the highway, and passing other vehicles is definitely a chore.

Powertrains are just one aspect of a vehicle's drivability. There are other elements that should be factored in as well. How secure are the brakes? Does the vehicle have a well-tempered ride quality? Is the vehicle's technology user-friendly? That could impact whether a buyer goes for a vehicle or passes it by.

The 2019 Nissan Rogue does have some issues with the brake pedal being too soft. This makes coming to a panic stop a little scary, to say the least. It is something a lot of drivers will have trouble getting used to. Also, the steering system feels much lighter than it should for a vehicle in this class. Effort does feel sufficient on the highway, but on slower roads, there is not a lot of feedback. Handling does not feel thrilling, and those pesky mid-corner bumps send a jolt throughout the cabin.

The Rogue's interior is quite cozy and looks modern enough. Up front, the seats are packed with plenty of comfort, although the headrests do tend to get in the way. The rear seats are also pretty comfy despite being set high. This might be problematic for some people,but the seats do recline and offer plenty of thigh support.

The ride itself feels nice enough, but dips in the road will produce some bounce. Wind and road noise are pretty well muted, and the engine only gets noisy when pushed into full throttle. The vehicle stays quiet overall and will not interrupt music or conversations.

The interior does have a few downfalls and highlights. The buttons are not well designed. The small touchscreen has a huge cluster of buttons that are hard to press, and the physical buttons that enshrine the touchscreen are too tiny. It is also hard to find the right driving position since there is no thigh adjustment and the headrests lean too far forward for comfort. Also, visibility is diminished by bulky rear roof pillars and the three-quarter side windows. Seeing the vehicle's blind spots is basically impossible.

On a positive note, the Rogue's cabin is spacious and leaves more than enough room for taller people. Getting in and out is easy too. Only the extremely tall might have to duck to get in. The faux leather looks nice and is padded well enough, even though some of the other materials in the cabin tend to look cheap. There is, however, a lot of cargo space in the Rogue (39.3 cubic feet, to be precise). The Divide-N-Hide system and low load height make getting cargo into the cargo area simple and efficient.

Technology on the Rogue is good, minus the cluttered touchscreen display. The ProPilot Assist system is one of the highlights, as it crams a lot of driver aids into one neat bundle. The Bose sound system produces high-quality sound, but the vehicle has a shortage of USB ports for those wanting to plug their devices in. Smartphone app integration via Android Auto and Apple CarPlay is standard across the line-up and work a little bit better with regard to voice recognition. The built-in voice recognition does not recognize natural speech patterns with ease, but this is a common problem on a lot of autos.

So, how does the 2019 Nissan Rogue Sport stack up against its sibling? Pretty closely, as it turns out. The Rogue Sport's brake pedal does feel firmer, which lends to more driver confidence. A panic stop can be securely made in 115 feet, which is good for this class. Steering feels stronger than the Rogue, but only just. Handling is bland when rounding through turns, but the vehicle can be guided through traffic with ease for a SUV.

The cabin's comfort levels are more of a mixed bag than the regular Rogue's. The seat bottoms up front feel stiff and make long rides feel a bit unpleasant. The 17-inch wheels do a good job at absorbing a lot of smaller bumps, but the suspension is definitely stiff. The sound system does rattle at higher speeds, but not a lot of wind or road noise makes its way into the cabin. Like on the Rogue, the engine growls at full throttle.

Similar to the Rogue, the controls are not all user-friendly. The controls mounted on the steering wheel are too small to easily see while driving, making it easy for drivers to press the wrong ones. Getting in and out is fairly easy though, and most drivers should be able to find a driving position without too much of a struggle. The cabin is spacious, much like its counterpart, and there is a decent amount of fore and aft visibility. There is an optional blind spot monitoring system that can help drivers see who might be creeping up in their blind spots. As far as quality goes, it is on-par with the regular Rogue, which is not saying much.

The Rogue Sport does have a good amount of cargo space. Its 20 cubic feet of cargo space can be maxed out to 61.1 cubes when the rear seats are folded down. These are some high numbers for this class.

Technology is essentially the same in the Rogue Sport as it is in the Rogue. The biggest drawback is the lack of extra USB ports. Smartphone app integration is standard and works even better than the built-in navigation and voice recognition features. The built-in voice control system (which is optional) is not perfect, but the system has relatively simple controls that have only a minor learning curve.

Overall, the Rogue Sport has a slightly better overall interior design, but it shares some of the same flaws found in the Rogue. Still, it gets a slight advantage due to a few design improvements.

The 2019 Nissan Rogue essentially has the same driver aids, so it comes down to the safety ratings to determine which vehicle is known for being safer. The Rogue was given 4/5 overall stars from the National Highway Transportation Safety Administration (better known by its acronym, NHTSA). It scored 4/5 overall on the Frontal Barrier Crash Rating test, with the Driver test getting only 3/5 stars and Passenger getting 4/5. Everything else got 5/5 stars, save for the Rollover portion, which got 4/5 stars. A 16.9% risk of a rollover was noted.

The Nissan Rogue Sport was also given 4/5 stars overall by NHTSA. Its Passenger portion of the Frontal Barrier Crash test was surprisingly worse, getting only 2/5 stars. The Driver portion did, however, get 5/5 stars. Rollover got 4/5 stars, and there was a 14.3% risk of rollover noted.

There is a significant price difference between these two vehicles. The 2019 Nissan Rogue Sport has a starting MSRP of $22,340 and tops out around $29,410. The 2019 Nissan Rogue has a starting MSRP of $25,020 and has a top price tag of around $32,990. Given that these two vehicles are basically on-par with one another in every aspect and share many of the same features on their different trim levels, a lot of drivers will rightfully be tempted to save a few thousand dollars and opt for the Rogue Sport.

Pronouncing a winner here is not easy. These two Nissans essentially have the same strengths and weaknesses. The 2019 Nissan Rogue Sport only comes out ahead based on its interior design and slimmer price tag. Otherwise, it is such a close call. Drivers will likely overlook both of these vehicles in favor of others in their class that have even more space, classier-looking materials, and better driving performances.