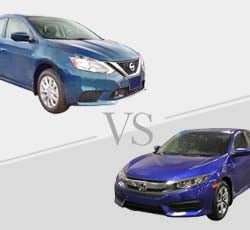 Compact sedans are typically good on gas and cheap to maintain. The 2019 Honda Civic and the 2019 Nissan Sentra definitely have these important qualities. A more attractive front bumper and Honda’s improved Display Audio infotainment system have made the latest Civic even more appealing. While the Sentra hasn’t received many big updates for 2019, Nissan’s popular Nissan Connect touchscreen with Apple CarPlay and Android Auto now comes standard on more Sentra trims. Does the 2019 Nissan Sentra have what it takes to know the 2019 Honda Civic off its pedestal?

Rated to develop 158 ponies and 138 pound-feet of torque, the 2019 Honda Civic’s base four-cylinder engine will handle the daily grind with no trouble. However, stepping up to the turbocharged four-cylinder engine does noticeably boost performance. It pushes out a more satisfying 174 hp and 162 lb-ft of torque. Drivers seeking maximum fun should consider the Civic Si. Honda tweaks its turbocharged engine to crank out more than 200 hp and 192 lb-ft of torque.

Most Sentra trims come equipped with a small four-cylinder engine, which develops 130 hp and 128 lb-ft of torque. Folks who are bored with the base engine can upgrade to a livelier turbocharged engine. Nissan tunes it to produce 188 hp and 177 lb-ft of torque.

The Civic’s base engine isn’t a bad choice. However, turbocharged versions of the Civic are especially strong. Testers have clocked the Civic Si with a 0-60 mph time of 6.6 seconds. Don’t expect the Sentra’s base engine to offer much excitement. It’s lack of muscle results in a leisurely 0-60 mph sprint of 9.5 seconds. Getting the turbocharged engine lowers the Sentra’s 0-60 mph time to 7.0 seconds.

Drivers who prioritize fuel economy will be very impressed with the new Civic. It has the ability to deliver a combined 36 mpg. Even the more powerful Civic Si approaches 40 mpg on the highway. On the other hand, the Sentra also isn’t bad on gas. Expect models with the base engine to return a combined 32 mpg.

Like the Honda Civic, the Nissan Sentra features a front-wheel-drive system. All-wheel drive is not offered. This means drivers will likely experience diminished traction in snowy conditions.

Honda engineered the Civic with an excellent braking system. Not only does the Civic stop quickly when needed, but it also feels stable. The Sentra delivers an average braking performance. Some drivers may find the Sentra’s brakes to be a bit on the sensitive side.

Historically, Honda has always been noted for its solid reliability. Unfortunately, the latest Civic model takes a step back in the reliability department. J.D. Power’s latest dependability survey gives the Civic 2.5 stars out of 5. With a 3-star rating for dependability, the Nissan Sentra actually edges out the Civic.

In terms of warranty coverage, neither car has a clear advantage. They both are covered with a 60,000-mile powertrain warranty.

Despite its rather weak base engine, the 2019 Nissan Sentra is easy to live with on an everyday basis. Models fitted with an automatic CVT are smooth performers. Expect the 2019 Honda Civic to be just as easy to drive. However, it’s turning radius is not quite as tight. However, very few people will have any trouble with the Civic’s ability to maneuver in small spaces.

Drivers seeking the best-handling car will want the Honda Civic. It dances around corners like an experienced ballerina. A natural-feeling steering system also helps the Civic to inspire confidence. Sports-tuned shocks with adaptive dampers help the Civic Si to truly excel on twisty roads.

When behind the wheel of the Nissan Sentra, drivers can expect to experience more body lean around curves. It’s not as balanced as the Honda Civic. However, a recalibrated steering system and stiffer springs help the Sentra SR Turbo and Sentra Nismo to handle with more poise.

Although the Sentra may not be a serious sports sedan, it does offer a great ride. The Sentra's standard suspension setup soaks up ripples in the road with no trouble. This is a great car for traveling. However, expect the Honda Civic to deliver an even more fluid ride. Even cars in a higher price bracket don’t absorb bumps like the new Civic.

The Nissan Sentra gives drivers an outstanding view of the road. Large windows help you to better see other vehicles and pedestrians. There are only a minimum number of blind spots. However, its seats are just average in terms of comfort. Nissan does not offer the Sentra with its excellent Zero Gravity front seats.

Most people will find the Civic’s seats to be incredibly comfortable. While the seats feel plush, they still manage to hug your body when taking sharp curves. Aside from the Civic’s well-shaped seats, it also provides a reassuring driving position. Outward visibility is good as well.

Getting in and out of the Nissan Sentra is a breeze. Wide doors and a good step-in height help make the Sentra a good pick for all ages. Some passengers will not enjoy the Civic's sloped roof.

Tall drivers can fit inside the Civic with no issues. Because of the Sentra’s high seating, some tall drivers may feel a bit out of place. When it comes to accommodating families, both cars will provide the necessary space. There’s ample legroom for folks sitting in the back. These compact sedans also offer a similar amount of trunk space.

Regardless of which sedan a person chooses, they will enjoy easy-to-use technologies. Honda has added a new volume knob and extra buttons to its Display Audio infotainment system. It’s now just as enjoyable as the Sentra’s Nissan Connect interface.

Every crash-testing agency has given the 2019 Honda Civic high marks. It’s definitely a safe commuter car. The NHTSA yet again gave the Civic a full five stars for its excellent impact protection. However, there is a key weak spot for the new Civic. IIHS testers gave the Civic’s headlights a poor rating.

Regarding overall crash protection, the 2019 Nissan Sentra is a step behind the Civic according to the NHTSA. It received four stars. However, only the Sentra received Top Safety Pick credentials from the IIHS.

The Sentra comes standard with automatic emergency braking. Tests show this is one of the most effective driver-avoidance technologies on the market. However, there are even more standard safety features on the Civic. Aside from forward collision braking, the Civic’s Honda Sensing system also provides driving aids like lane-keep assist and adaptive cruise control. Lane-keep assist is not even offered on the Sentra.

Nissan offers the best blind-spot monitoring system. It detects oncoming vehicles from both sides. Although Honda’s LaneWatch camera system is designed to reduce blind spots, some drivers actually find it to be more of a distraction. Furthermore, this system only works on the passenger side.

Parents will be thankful for the Civic’s smart side airbags. When someone is detected leaning against the door, the system will reduce the force of the airbags. This means small children will be better protected.

Drivers who need a cheap and reliable car will love the 2019 Nissan Sentra. It has a very low starting price of $18,700. By comparison, Honda lists the Civic with an MSRP of $19,550. At the end of the day, both cars are a legitimate bargain.

Which base model is the better value? Because of the Nissan Sentra’s lower sticker price and standard 7.0-inch touchscreen, it may offer a tad more value. A basic 5.0-inch infotainment display comes standard on the Civic. On the other hand, Honda does equip the Civic with a few more standard safety features.

Let’s take a look at which car’s performance trim offers the best bang for the buck. The 2019 Honda Civic Si starts at $24,300. Aside from enhanced performance, it comes equipped with sport seats and a 10-speaker sound system. Meanwhile, prices for the Sentra SR Turbo start at $22,670. Buyers will enjoy a similar list of features. However, only the Sentra SR Turbo can be equipped with an automatic transmission.

Drivers who are seeking luxury as opposed to performance will be looking at the Sentra SL, which demands $23,120. It has upgrades like heated leather seats and an eight-speaker Bose sound system. You can compare the Sentra SL to the Civic Touring. While the Civic Touring is luxurious, buyers will have to shell out more than $27,000.

Both of these cars are inexpensive to maintain. Owners won’t have to pay a fortune for routine services like brake pad replacements and oil changes.

Before deciding which car wins this comparison, it’s a good idea to first reevaluate their strengths and weaknesses. The 2019 Honda Civic offers the best combination of performance and fuel savings. Even the performance-focused Civic Si is good on gas. Drivers will find the Civic to be a very fun car for commuting. Although the turbocharged Sentra may provide some driving excitement, don’t expect the Sentra’s underpowered base engine to cause a stir.

In terms of comfort, these cars are virtually a tie. They provide a similar amount of passenger and cargo space. However, the Civic’s front seats are more relaxing. Neither car offers high-end features like a ventilated seats or a head-up display.

When shopping for a new ride, styling is a big factor for many people. Both sedans have unique styling cues. The Sentra’s V-Motion grille is a cool feature. While the base Sentra has a Plain Jane appearance, driving enthusiasts will love the racy look for the Sentra Nismo. A new front bumper has elevated the new Honda Civic’s attractiveness.

These cars promise to provide a safe ride. Although the Civic may have a higher NHTSA safety rating, the Sentra was named a Top Safety Pick. Both offer the beneficial accident avoidance technologies like forward collision mitigation and adaptive cruise control.

No one will get berated for buying a new 2019 Nissan Sentra. However, the 2019 Honda Civic is the better overall compact sedan. It provides more fun and saves more money at the pump. A high-quality design also helps the Civic to win this head-to-head battle. However, buyers should be aware of the Civic’s decreased reliability. The new model is not as dependable as previous generations.

Save Money on a 2019 Nissan Sentra:
Are you Shopping for a New Vehicle? Find the Best Deals with "Free - No Hassle" Prices Quotes.