2019 Nissan Sentra Pros vs Cons. Should You Buy? 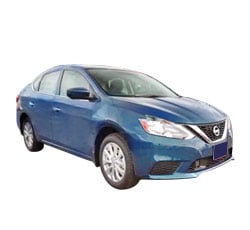 Should You Buy a 2019 Nissan Sentra? Here Are Some Reasons For and Against

There are a lot of drivers who will enjoy the 2019 Nissan Sentra. It’s stylish, spacious, and inexpensive to maintain. Turbocharged models are especially fun to drive. While the Sentra remains a solid compact car, the competition is now stiffer than ever before. Let’s find out if the new Sentra is the right choice for you.

Aside from the low-cost base model, all versions of the 2019 Nissan Sentra come equipped with Apple CarPlay and Android Auto. Nissan has also introduced a new SV Special Edition Package, which comes loaded with a few extra goodies. No other big changes were made for 2019.

If the new Nissan Altima is a bit out of your price range, the 2019 Nissan Sentra will prove to be a great alternative. The base models starts at less than $18,000. Even the more luxurious SV trim is priced under $19,500. Furthermore, every driver can take advantage of the Sentra’s low cost of maintenance. Some of the standard features include a 5.0-inch touch screen, Bluetooth audio, and a backup camera.

Although some of the Sentra’s competitors may be a touch more efficient, it’s still quite good on gas. Models equipped with an automatic CVT can return 29 mpg in town and up to 37 mpg on the open highway. The base engine is also tuned to use regular unleaded gas. If you step up to the turbocharged engine, you’ll need to burn premium fuel. Fuel economy stands at a decent 33 mpg on the highway.

The standard Sentra is unlikely to spark an adrenaline rush. Drivers who demand more performance should check out the Sentra SR Turbo. Its boosted engine is tuned to push out a competitive 188 horsepower and 177 pound-feet of torque. When tested at the track, this model posted a 0-60 time of around 7.0 seconds. You can also take advantage of the Sentra SR’s nimbler handling. Active Understeer Control and a performance-calibrated suspension help keep the Sentra Turbo SR composed on twisty roads.

Atop the Sentra lineup sits the aggressive-looking Nismo model. A lowered suspension and a special set of 18-inch wheels give the Sentra Nismo an especially menacing stance. You’ll also notice the Sentra Nismo’s powerful body kit, which features signature red striping. A chrome exhaust finisher accentuates the sedan’s sporty character. For the drivers who don’t desire any extra power, Nissan offers a non-turbocharged SR trim. Some of the available colors include Gun Metallic, Powder White, and Scarlet Ember.

Don’t be misled by the Nissan Sentra’s compact design. It’s certainly spacious enough for most families. Because of the Sentra’s impressive amount of hip room in the back, adults can ride without feeling confided. When traveling for a long distance, everyone will appreciate the Sentra’s supportive seats. Large doors enable passengers to easily climb inside. With more than 15 cubic feet of cargo space, the Sentra also boasts one of the biggest trunks in the class.

Drivers will have no trouble using the NissanConnect infotainment system. Although some systems may have better graphics, a simple design makes NissanConnect very rewarding. Unlike last year’s interface, the updated version provides Apple CarPlay and Android Auto smartphone integration. From Facebook to Google, you’ll have access to a number of popular mobile apps. While a 5.0-inch touch screen is found on the base model, a 5.8-inch display is optional on the SV trim.

The 2019 Nissan Sentra comes standard with a four-speaker audio system, which leaves much to be desired. Although a six-speaker system is found on the higher trims, your best bet is to get the optional Bose sound system. It will make your music-listening experience a lot more fulfilling. Eight speakers surround the cabin to create a more exciting drive. Even when playing music at a high volume, sound quality remains good.

Nissan equips the Sentra with some useful safety technologies. The backup camera makes parking less of a challenge. All trims also now benefit from automatic emergency braking, which can prevent you from crashing into an unexpected obstacle. Although blind-spot monitoring doesn’t come standard, it’s a great upgrade to consider. It’ll give you more assurance on crowded roadways. Rear cross-traffic alert and adaptive cruise control are available as well.

When behind the wheel of the 2019 Nissan Sentra, you’ll have a good view of the road ahead. For this reason, the Sentra is a good choice for inexperienced drivers. Large windows help drivers to remain aware of their surroundings. When driving in heavy traffic, you’ll definitely be thankful for the Sentra’s good outward visibility.

The Nissan Sentra’s standard suspension is tuned just right for daily commuting. It does an admirable job of soaking up small potholes and cracks in the road. While the Sentra is a good car for the everyday grind, drivers shouldn’t hesitate to take it on a lengthy highway trip. Although the SR Turbo’s stiffer suspension will cause you to feel more bumps, most drivers won’t have any criticisms.

Reasons Not to Buy a 2019 Nissan Sentra – The Cons

While the Sentra’s base four-cylinder engine doesn’t burn a lot of fuel, it may not pack enough performance for some drivers. Nissan rates it to produce only 124 horsepower and 125 pound-feet of torque. When driving in hilly areas, the Sentra may struggle at times. Acceleration is also rather slow. Drivers seeking a more entertaining commute should choose the turbocharged engine.

2. SR Turbo Model’s Performance a Level Below the Competition

Most people will have a great deal of fun driving the 2019 Nissan Sentra SR Turbo. Nevertheless, its performance is a step behind rivals such as the Honda Civic Si. The Civic Si is quicker and more responsive. You’ll also notice the Civic Si’s tighter handling.

When driving around on a rainy day, the 2019 Nissan Sentra should perform well. However, its front-wheel-drive system doesn’t provide enough traction for wintry weather. Attempting to maneuver the Sentra through the snow could prove to be a challenge. Drivers who live in snowy areas should check out the 2019 Subaru Impreza, which comes standard with an advanced AWD system.

4. Some Trims May Be Too Expensive for You

While the Sentra’s lower trim levels are affordable, some of the other trims may be just a bit too expensive for your taste. While the luxurious SL model demands roughly $23,000, the performance-focused Nismo model approaches $26,000. Furthermore, choosing the turbocharged engine requires you to buy premium gasoline.

Last year’s model was chosen as a Top Safety Pick by the IIHS. However, it only garnered a four-star overall safety rating from the NHTSA. Rivals, such as the Honda Civic and the Ford Focus, received a five-star overall rating. The Sentra’s frontal impact protection isn’t as good.

Some of the Sentra’s key rivals include the 2019 Honda Civic, the 2019 Ford Focus, and 2019 Mazda 3. When equipped with its base engine, the 2019 Nissan Sentra doesn’t deliver as much performance as these competitors. You’ll also notice the Sentra’s slightly lower fuel economy ratings. However, there’s not as much passenger room inside the Mazda 3 and the Ford Focus. Meanwhile, drivers in need of a winter car should consider the AWD-equipped Subaru Impreza.

Before you make a final decision on a new compact sedan, be sure to sample the 2019 Nissan Sentra. A roomy cabin makes it a great option for families. While models equipped with the base engine are not exciting, Nissan does offer a more powerful turbocharged engine. Easy-to-use features make the 2019 Nissan Sentra more appealing. If you don’t like the base Sentra’s Plain Jane appearance, take a look at the sleeker SR trim.