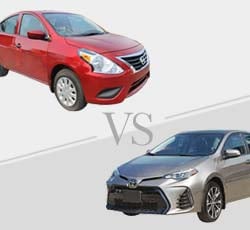 The Nissan Versa and Toyota Corolla are both sedans that offer good value for their price. Though technically the Corolla is a mid-size sedan and the Versa is a compact one, they are similar in many areas. They have comparable engines and interior features, and both come with many safety features. There are only three versions of the 2019 Versa - the S, SV, and SR - and the Corolla comes in seven different trims, to include a hybrid version of the LE.

The front-wheel drive Nissan Versa is powered by a 1.6-liter four-cylinder engine. It's enough to give the Versa a little bit of kick, with 122 horsepower and 114 pound-feet of torque, but don't expect to be floored by the acceleration on the car. Sequential multi-point fuel injection is used, as is continuously variable valve timing.

On the S model, there's the opportunity to get a five-speed manual transmission if anyone wants to have a more hands-on experience while driving. Otherwise, the S, as do all the other trims, comes with the Xtronic continuously variable transmission.

Making the Nissan sedan easier to drive are electric power steering and an electronic brake force distribution program. With anti-lock brakes and a brake assist system, the risk of skidding or sliding while pressure is being applied to the brakes should be significantly minimized. Stabilizer bars in both the front and back, front struts, and a torsion beam suspension in the rear all work together to smooth out the ride.

Fuel economy is pretty good on the Versa. The S with manual transmission gets up to an estimated 27/35 (city/highway) miles per gallon. The other trims and the automatic S get an estimated 32/40 mpg.

The Corolla does do better in the efficiency category. The L and LE can get 30/38 mpg. The automatic SE achieves 31/40 mpg, and the manual version is just a bit lower at 29/36 mpg. At the higher end of the spectrum, there are the XLE and XSE trims. The XLE is estimated to get 29/37 mpg, with the SXE at 31/38 mpg. Coming in well above any of these versions is the Hybrid LE. A solid contender in the hybrid market, this Corolla can travel up to 53 miles with one tank of gas.

The reason there are so many different stats for the Corolla is that there are many different engine types. The L, LE, and XLE each run on a four-cylinder engines that has a displacement of 1.8 liters. They have dual variable valve timing with intelligence, and they're able to generate 139 horsepower and 126 pound-feet of torque. The SE and XSE models use a 2.0-liter four-cylinder engine that's significantly more capable. This engine has 169 horsepower and 151 pound-feet of torque.

The two trims that offer two different drive modes - Normal and Sport - are the SE CVT and the XSE. These two cars also have a dynamic-shift continuously variable transmission that's different than the other Corolla transmissions because it has a physical first-launch gear. This design provides a little extra boost when drivers start to accelerate, and it can add to the overall sporty feel of these trims.

The Hybrid LE is an attractive offering because of its mileage. It uses a 1.8-liter four-cylinder engine with variable valve timing with intelligence. Its horsepower is only 121 horsepower, though, and it has 105 pound-feet of torque.

Like the Versa, the Corolla is only offered as a front-wheel drive vehicle. It has independent front struts and a multi-link rear suspension, and stabilizer bars are present in both the front and back. Electric power steering makes it easier to make turns, and smooth braking is ensured thanks to an electronically controlled braking system.

Both vehicles fit five people. In the Versa, the trunk has 15 cubic feet of room, and that's decreased slightly to 14.7 cubic feet in the S. Leg room in the front is a comfortable 44.5 inches. In the back, things can be tight for taller people, as there is only 31 inches of rear leg room. The back seats of the Versa S are all fused together, but the other trims have a 60/40 split configuration for more versatility.

In the Toyota, leg room is smaller in the front but greater in the rear. The driver and front passenger get 42 inches of leg room, and people in back can stretch a little with 34.8 inches of leg room. The trunk measures 13.1 cubic feet, which would hold most items but certainly not all. All Corolla trims have the 60/40 split rear bench, and on most of the trims, there is a center armrest with cup holders that can be utilized when no one is seated in the middle.

The driver's seat on the Versa can be manually adjusted in six different ways, and the front passenger seat can be adjusted in four different ways. Cloth is found on the S, premium cloth seats come on the SV, and passengers in the SR can enjoy a more stylish sport cloth. The SR comes with a leather-wrapped steering wheel and shift knob, and it's the only option in which heated front seats are an available option.

Likewise, the base model of the Toyota has manual controls and standard fabric. It's upgraded to a premium fabric on the LE, and the SE cars have premium sport seats with specially styled inserts. The XLE and SXE have SofTex-trimmed heated front sport seats, and ambient lighting and wireless charging are both available.

The Versa is a budget-friendly car, and as such, not too many luxuries are included. Automatic temperature control is included on the SR versus the standard air conditioning on the S and SV. The car does have sun visors, vanity mirrors, interior lights, and a 12-volt power outlet for quick charging of your external accessories. Like the Versa, the Corolla's interior comes with various storage compartments, interior lighting, a power outlet, and multiple ports for charging devices with USB cables.

A modern feature that the Versa has is remote keyless entry, which is linked to a push button ignition. This allows drivers to keep keys safely secured in their pockets or bags. On the highest trim, the system is upgraded to the Nissan Intelligent Key system and includes remote start capabilities.

The Corolla LE and SE CVT trims have a comparable style of remote keyless entry. On the higher trims, this is included as a smart key system with push button start.

On the base model of the Versa, there are many high-tech features that so many of today's drivers are looking for. For instance, the car comes with three USB ports for charging multiple devices, and it has Bluetooth and voice recognition capabilities. This lets drivers use their phone hands-free as they make calls, control playback, and send and receive texts.

The touchscreen on the SV and SR measures seven inches. It doesn't look that different from the seven-inch screen on the S but is definitely an upgrade, since the S's component is not a touchscreen. Another notable enhancement is that these trims come with Apple CarPlay and Android Auto. The higher quality audio system that is seen on these trims has six as opposed to four speakers, and it is compatible with SiriusXM Satellite Radio.

The Toyota has a a better package, considering that even the L comes with six speakers and a seven-inch touchscreen in addition to voice recognition, Apple CarPlay, Amazon Alexa, and Bluetooth streaming. The screen is enlarged to eight inches on the other trims, and there's the option to include premium speakers and greater connectivity like integrated navigation.

Protecting passengers on both vehicles is a full array of air bags. They're located around the cabin to keep people safe in case of an impact from any side. Crumple zones in the front and back are incorporated into the vehicles' bodies to absorb energy generated by any impact.

Standard cruise control is included on all Versa trims, with intelligent cruise control an option on the SR. This more advanced program can maintain a designated distance from the vehicle ahead and either speed up or slow down to keep the right distancing. Toyota has a system that can do the same, and the difference is that it's included on all the trims, even the base.

Even at this price point, several driver-assist features are included on the Versa. The first is automatic emergency braking that can activate if a vehicle or pedestrian is detected and the Versa isn't slowing down yet. Rear automatic braking is also standard on all trims in case drivers can't see something behind them. To help keep this from being needed, a rearview monitor is present on all trims. When driving a Versa, people will also be warned if they start to veer out of a lane.

In the SV and SR trims, drivers will receive warnings if they are about to back up into cross traffic or change lanes when others are in their blind spots. The Intelligent Driver Alertness program can be just enough to keep people focused on the road.

Toyota Safety Sense 2.0 is the name of the package of driver-assist features on the Corolla and the company's other models. It also has a pre-collision system that can predict impacts and take corrective action as necessary. Its Lane Departure Alert program includes corrective steering as well. The Corolla can even read signs and project that information on your screen, serving as an additional reminder to follow all street signs.

The Versa is quite affordable, with the S manual starting at $14,730 and the S automatic starting at $16,400. The other two trims are not that much more expensive and are still well below the $20,000 threshold. The SV costs $17,640, and the MSRP of the SR is $18,240. With these higher trims, the car gets upgraded on the interior as well as on the exterior. Exterior enhancements are seen in the wheels, headlights, and trims.

If budget is the primary concern, the Versa is the winner in this match-up of sedans. However, many people want more than just a cheap car. The Corolla is more complete in terms of its technology, safety system, style, and performance. Other than the hybrid version, it has much more horsepower than the Versa does, making it more exciting to drive. Another thing going for the Corolla is that it's fairly efficient, even if someone doesn't opt for the hybrid. Though the Corolla costs more than the Versa, it makes more sense to buy a Corolla over a Versa.

Save Money on a 2019 Nissan Versa:
Find New Car Clearance Prices - Many Vehicles are Selling Below Dealer Invoice Prices.

Every dealer offers a secret price. Many prices are below invoice. Find yours here.
Compare Clearance Prices.
Find the Best Deals in Your Area.
Loading ...
Save Thousands on a New Car! Start Your Own Online Price War