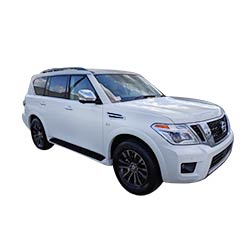 What 2020 Nissan Armada Trim Level Should you Buy? What is the Difference Between Trims?

As a full-size SUV, the 2020 Nissan Armada has a lot to offer. It has a powerful engine, a nice array of interior features, and an exterior style that's a little rugged and elegant at the same time.

Running on a sizable 5.6-liter V8 engine, the Armada delivers 390 horsepower and 394 pound-feet of torque. With this capable component roaring under the hood, the Armada has a fairly respectable towing capacity at 8,500 pounds. Maximum payload varies by model and configuration, and it hovers around the 1,500-pound mark.

Two- and four-wheel drive are both available. The engine is paired with a seven-speed automatic transmission. Since it has a manual shift mode, drivers can feel more in control of speed transitions and have some fun opening things up on the road when the situation allows it.

Fuel economy isn't the best in this Nissan SUV, but this is to be expected with a vehicle of this size. On two-wheel drive models, estimated fuel economy is 14 mpg in the city and 19 mpg on the highway. The numbers drop to 13 and 18 mpg, respectively, when the vehicle has four-wheel drive.

In addition to the dedicated cargo area in the back, there are numerous storage compartments that can be found throughout the cabin. This means that people in every row can keep their belongings within easy reach. Every door has storage pockets, and in the back, there are trays built into the side panels. Up front, there are seatback pockets and an overhead area ideal for sunglasses. The cargo area has a hidden storage area under the floor, and it comes with eight tie-down hooks to keep things secure.

Throughout the vehicle, there are four cup holders and eight bottle holders so that every beverage can have its place. Interior lighting is tasteful, and it includes map lights in the front and reading lights in both the second and third rows. Footwell and rear step lights are included on the higher trims for greater illumination.

In terms of safety, the Nissan Armada does well. All four of its trims - which are the SV, SL, Platinum, and Platinum Reserve - have numerous driver-assist mechanisms. They come with intelligent cruise control that maintains proper distancing with other vehicles, forward collision warning and automatic emergency braking that can potentially prevent accidents, and front and rear sonar sensors that can come in handy while parking.

All trims have an advanced air bag system, a full set of three-point seat belts, and child-safety locks that keep kids from accidentally opening rear doors. Crumple zones have been strategically placed to absorb impact in case there is any type of collision, and the doors are made out of high-strength material for extra protection.

A dual-zone automatic temperature control is standard to help keep things comfortable inside the cabin. In large vehicles, it can be tricky to control the rear climate, but the Armada works around this with a rear air conditioning system and its own set of controls. Heater ducts in the back are built into the SUV to keep passengers warm in the winter.

Even with all of these similarities, there are some noticeable differences between the trims. This guide will provide more information so that consumers can make more informed decisions.

Compare the 2020 Nissan Armada SV vs SL Trim Levels. What is the difference?

The Armada SV has 18" aluminum-alloy wheels, and the SL has 20" machine-finished wheels. The SV is the only trim that doesn't come standard with fog lights, but they are available. A power liftgate can come in handy when a lot of cargo has to be loaded. This is standard on the SL and available on the SV. A small stylistic detail that enhances the overall feel of the cabin is leather-appointed door trim. The trim has double stitching, and it comes standard on the SL and higher models.

With power heated outside mirrors with turn signal indicators, the Armada can defrost its own mirrors in frosty conditions. On the SV, the mirrors are body-colored, and they're chrome on the SL. Plus, the SL's outside mirrors have puddle lights and an auto-dimming feature that reduces glare.

On chilly days, the driver and front passenger in both the SV and SL can enjoy heated front seats. The driver's seat and outside mirrors have a memory function on the SL that are useful when multiple people take turns commanding the Armada.

The second row on the SV and SL come standard as a 60/40 split-bench that can be tipped up for easier access to the back. On the SL, there is the option to get captain's chairs instead of the bench, reducing seating capacity to seven from eight but increasing roominess. The third row on the Armada is a 60/40 split-bench as well, and it can be power operated on the SL.

With the 60/40 configuration, the seating arrangements are flexible. One side or both sides of the benches can be lowered to free up space for longer or bulkier items that need to be transported. Seats are cloth on the base model and upgraded to leather-appointed seats on the SL.

A remote engine start system can be key if anyone wants to get a head start on warming up or cooling down the cabin. This is standard on the SL, as is the HomeLink transceiver that can act like a garage door opener or even turn a security system on or off. Other little improvements on the SL in the convenience category are an auto-dimming rearview mirror that can lessen the distraction of other vehicle's headlights and a 120-volt AC power outlet.

Most modern consumers pay close attention to technology when purchasing new vehicles. Both of these trims (along with the two higher trims) have the NissanConnect system that is operated through an eight-inch touchscreen display. Navigation is built in, which is helpful especially when traffic conditions have to be accounted for; the system can adjust to traffic because it's equipped with SiriusXM Traffic and Travel Link.

The Armada's infotainment system can recognize voice controls, allowing drivers to keep their hands on the wheel. Bluetooth compatibility is standard, and the system can make it easy to make and send hands-free phone calls and texts. It's nice that the Armada comes with SiriusXM Radio, HD Radio, and a premium 13-speaker Bose sound system that provides good sound quality. Four USB ports are included to give passengers a way to keep their devices charged.

Compare the 2020 Nissan Armada SL vs Platinum Trims.  What is the difference?

A few ways in which the SL and Platinum can be differentiated are found on the outside of the Armada. While the SL has dark-painted overfenders and the option to include a power sliding glass moonroof, the Platinum has body-color overfenders and the power moonroof. The moonroof is easy to open and close whether one is sliding it back and forth or tilting it. Useful in cold weather, the windshield wipers on the Platinum come with an integrated de-icing system.

On the Platinum, not only do the front seats come with a heating element, but they also come with a cooling element. Further, the Platinum has heated second-row seats and a heated steering wheel. Its seats are leather-appointed like in the SL, but they can come with a two-tone leather pattern for added visual interest.

The Platinum has a few upgrades on its infotainment system, the first of which is that it has five USB ports instead of just four. Additionally, it comes standard with a tri-zone entertainment system. This package has two eight-inch monitors that rest on the front headrests and a DVD player that can be controlled remotely. Alternatively, people can input their own data using the HDMI port. Two wireless headphones are included so that the driver doesn't need to get distracted from the sound.

Compare the 2020 Nissan Armada Platinum vs Platinum Reserve. What is the difference?

The Nissan Armada offers a complete package. It pairs competent engine components with upscale interior elements. The Armada can be used to tow heavy cargo, making it practical for anyone who has to occasionally transport a trailer.

Three rows of seating make the Nissan attractive to a particular sector of the market. Depending on whether the middle row has a bench or captain's chairs, the SUV can carry eight or seven total passengers. The SV starts things off with cloth seats, and those are quickly upgraded to leather ones on the next trim up. The standard heated front seats included on all trims are a nice touch on Nissan's part.

Unless someone really wants to pay extra for details on the Platinum Reserve like special badging, two-tone seats, or dark chrome accents, it makes more sense to go for a mid-level trim. This is especially true since all trims have mostly the same safety and performance features.

When pricing is accounted for, the SL shines as the trim that has the best value. It has some luxury elements like leather seating and a power liftgate, along with a remote engine start capability. These elements can be appreciated every day by drivers and their passengers, and they make it worth it to upgrade from the base SV model.

The Platinum could also be a good choice for those who are willing to accept its slightly higher price tag. It comes with the entertainment package and heated rear seats in addition to all of the other standard features, and this may appeal to people with a lot of passengers to think about.
Save Money on a 2020 Nissan Armada:
Are you Shopping for a New Vehicle? Find the Best Deals with "Free - No Hassle" Prices Quotes.