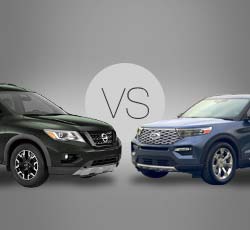 2020 Pathfinder vs Explorer - How do they stack up? Which is Better?

Buyers who need room for more than five but do not want a giant vehicle to try to maneuver around town in often look to the midsize three-row SUV. These vehicles try to find balance between large interior space and smaller exterior dimensions. Both the Nissan Pathfinder and the Ford Explorer are SUVs that fall into this category.

The Nissan Pathfinder has an impressive powertrain. It also makes it simple to access that all-important third-row of seating. Throw in standard driver aids and buyers find themselves with an enticing option. However, the Pathfinder is still in its fourth generation, which debuted back in 2013. There were no significant changes made for 2020, making it easy to argue that the cabin is starting to feel dated.

As for the Ford Explorer, it received a complete redesign for 2020. It has ample space for the whole family, plus all of their various belongings. The Explorer also has some intriguing powertrain options for drivers to explore and sees a return to standard rear-wheel-drive in 2020.

So which is the better choice? Buyers who take a closer look at both the Pathfinder and Explorer will discover that the differ in a few key ways. This article aims to point out the most important differences to make it easier to decide.

One of the things drivers like the most about the Pathfinder is its standard engine. Underneath the hood of all four trim levels is a 3.5L V6 that can generate 284-horsepower and 259 lb-ft of torque. This engine works well with the continuously variable transmission that is standard across the line. While many CVTs are a bit clunky, the one found in the Pathfinder is nice and smooth.

No matter which engine buyers choose for their Explorer, they will find a ten-speed automatic transmission. Unlike the front-wheel-drive Pathfinder, the Explorer has rear-wheel-drive standard. Four-wheel-drive is also an option. The maximum towing capacity of the Explorer when properly equipped is 5,600 pounds, falling just shy of the Pathfinder's number despite having more horsepower and torque. It will do slightly better off-road, however, thanks to its 7.9-inches of ground clearance, compared to the Pathfinder's even 7-inches.

Both of these three-row SUV options have better than average fuel economy numbers. For the Pathfinder, drivers will see 20mpg in the city and 27mpg highway. With four-wheel-drive, each of these numbers drop down by just one mile per gallon.

When it comes to reliability, the Pathfinder may scare some buyers off. J.D. Power has given it only 2.5 stars out of five, which is pretty low for the class. The Explorer managed to get three stars, which is obviously better but still on the low side for three-row SUVs. Warranties are identical for the Pathfinder and Explorer. Drivers get three-year or 36,000 miles for basic and five years or 60,000 miles for the powertrain, which is considered average for the vehicle class.

Three-row SUVs are not necessarily known for their handling. The Explorer does fairly well, however, likely because it has gone back to rear-wheel-drive standard. As for the Pathfinder, it has a firm quality to its ride. This results in bumps in the road being easily felt by those in the cabin. Any buyer who is hoping to get the most athletic three-row SUV out there should try out the Explorer ST. On top of the additional horsepower and torque, it has a stiffer suspension.

The overall passenger volume of the Explorer is much larger than that of the Pathfinder. As a result, it beats the Pathfinder when it comes to leg, head, and shoulder room. There are a couple of exceptions here, however. The Pathfinder actually has over two extra inches for second-row legroom. It also gives front row passengers a touch more headroom.

Parking the Pathfinder may be a bit easier. This is due to the fact that the Explorer is over an inch wider than the Pathfinder. These two SUVs are nearly identical when it comes to both length and height, however.

Another thing these two SUVs have in common is their standard 8-inch touchscreen for their infotainment systems. The Explorer also offers a 10.1-inch vertical screen, but many find it to not be as user friendly as the 8-inch option. Any buyer who is after smartphone integration will want to skip the Pathfinder. It does not even offer Android Auto or Apple CarPlay, while these are both standard across the line for the Explorer.

Where the Explorer loses tech points for being user-friendly, however, is with its USB ports. There is one located in the front and one located in the second-row. Third-row passengers are simply out of luck. The Pathfinder does much better, coming standard with six USB ports.

Like most vehicles, the entry-level models of both the Pathfinder and Explorer have cloth upholstery. Leather upholstery is available on upper trims of either option. Both of these SUVs have tri-zone automatic climate control, a huge factor when it comes to keeping passengers happy. Both the Explorer and the Pathfinder do a good job of reducing road and wind noise, resulting in a quiet and relaxing cabin.

Like the Pathfinder, the Explorer can have adaptive cruise control and the surround-view camera on higher trim levels. Also available for the Explorer are even more advanced features, such as active perpendicular and parallel park assist, traffic sign recognition, reverse automatic emergency braking, and evasive steering assist. A blind-spot monitoring system that includes trailer coverage is available as well.

When it comes to crash testing, the National Highway Traffic Safety Administration awarded both vehicles with five out of five stars overall. They both received five stars for front and side impacts and they both got four stars in rollover testing.

The Insurance Institute for Highway Safety also evaluates the safety of new vehicles. It named the Pathfinder as a Top Safety Pick for 2020. This title was not awarded to the Explorer, due to its "acceptable" rather than "good" rating in small overlap front driver-side testing.

Buyers will find that they can get a Pathfinder for much less than an Explorer. The entry-level Pathfinder costs $31,680. As for the Explorer, buyers are looking at paying a minimum of $36,675. Price tags climb quickly as drivers move up the trim ladder, with the top-of-the line Explorer costing $58,250. A top-of-the-line Pathfinder costs only $42,000.

Where the Explorer regains some ground, however, is in the cost of ownership category. The entry-level model is expected to cost buyers right around $7,000 over the course of five years. This number includes things like fuel costs, maintenance, and depreciation and assumes that the vehicle is driven approximately 15,000 miles per year.

The Nissan Pathfinder will be harder on the wallet over the first five years. In fact, it is estimated to cost drivers nearly $11,000. This is largely due to the fact that it is not quite as fuel efficient as the Explorer. The Pathfinder is also projected to depreciate faster.

Despite the higher initial cost, the Explorer is the better value here. It will save drivers at the gas pumps over time and be worth more when it is time to move on to the next vehicle. The Explorer also has more standard driver aids and smartphone integration, helping it to earn that higher price tag.

The Ford Explorer is the superior three-row SUV in this comparison for most buyers. It offers more power, more technology, and more cutting-edge tech. Thanks to its redesign, it also feels more modern. Although its price tag is higher, its entry-level model is actually right around average for the class. The Explorer is also a great example of buyers getting what they pay for.

At the same time, the Pathfinder is a fine option for anyone who is looking to spend as little as possible for a three-row vehicle. While it could definitely benefit from a redesign, it does give buyers a decent number of safety features. Plus, while it can't keep up with the Explorer in power or fuel economy, it has more than decent numbers in both categories itself.

Save Money on a 2020 Nissan Pathfinder:
Are you Shopping for a New Vehicle? Find the Best Deals with "Free - No Hassle" Prices Quotes.