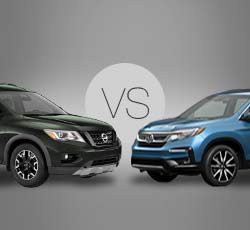 2020 Pathfinder vs Pilot - How do they stack up? Which is Better?

SUVs are very popular these days, and for good reason. They have a generous amount of interior space and capable engines, and they're as equally suited for everyday commuting as they are for rugged adventuring. The 2020 Nissan Pathfinder and 2020 Honda Pilot are two solid options for anyone in the market for a mid-size SUV. They're built with many modern features that make them a pleasure to ride in. There are several ways in which these models are different from each other, and this overview will describe those in detail.

First, it's important to mention the trims of each SUV. The Nissan Pathfinder's trims are the S, SV, SV Rock Creek Edition, SL, SL Rock Creek Edition, and Platinum. The Honda Pilot comes in six trims, which are the LX, EX, EX-L, Touring, Elite, and Black Edition. Because there are so many trims, the Pathfinder and Pilot can attract a wide range of customers open to different price points.

These two SUVs are sturdy, reliable, and strong. They actually both use V6 engines with a displacement of 3.5 liters and direct fuel injection. On the Nissan, the engine can generate 284 horsepower and 259 pound-feet of torque, and on the Honda, the engine can output a comparable 280 horsepower and 262 pound-feet of torque. The Nissan does have the upper hand when it comes to towing, as it can tow up to 6,000 pounds when properly equipped. In contrast, the 2WD versions of the Honda can tow up to 3,500 pounds, and the AWD Hondas have a towing capacity of 5,000 pounds.

The Pathfinder comes standard with front-wheel drive, but intelligent four-wheel drive is an option that many people take advantage of. Nissan has paired its V6 engine with an Xtronic continuously variable transmission (CVT) to give the engine the right amount of power at various speeds.

On the Honda Pilot, the all-wheel-drive (AWD) system is available on the first four trims, and the Elite and Black Edition are automatically equipped with AWD. There's also an intelligent traction management system built into the Pilot. As part of this system, the 2WD versions of the EX, EX-L, and Touring have a snow mode to boost traction to the best of the vehicle's ability. The AWD versions of those trims have snow, sand, and mud settings, as do the Elite and Black Edition trims. This sets up the SUV for better performance when the conditions are particularly difficult.

A six-speed automatic transmission is found on the Pilot's LX, EX, and EX-L trims. An enhanced transmission, which has nine speeds and paddle shifters, is used on the top three trims, and this can make the engine feel more responsive.

On the Nissan, things are more straightforward. FWD editions have a fuel economy of 20/27 miles per gallon, and this drops to 19/26 miles per gallon on AWD models. All of these numbers are very comparable, and honestly, efficiency isn't really a big strength of either SUV.

While being on the larger side, the Nissan Pathfinder and Honda Pilot are relatively easy to handle. Keeping the ride smooth in the Nissan are an independent strut front suspension and independent multi-link rear suspension. Shock absorbers and stabilizer bars help in this regard as well. A very similar set-up is found in the Honda Pilot. What the Pilot has that the Pathfinder doesn't is Active Noise Cancellation, which cancels out some of the noises coming from under the hood to make the cabin more peaceful.

As mentioned, the two SUVs are larger than many other vehicles out there, and this is necessary because they can have third rows. The wheelbase of the Pilot is 111 inches, and in the Pathfinder, it's 114.2 inches. Overall length of the Pilot is 196.5 inches, compared with 198.5 inches in the Pathfinder. They have exactly the same height and almost the same width and ground clearance, so from the outside, they will look very similar.

The third row is a tighter fit, especially in the Pathfinder. The Nissan only has 19.8 inches of third-row leg room, meaning that it's really meant for children. The Pilot does have more space with 31.9 inches, so some adults may fit back there. However, it certainly wouldn't be ideal for adults to ride in the back for hours at a time.

SUVs are known for their cargo space, and these vehicles have plenty of room when all the rear seats are lowered. Maximum cargo capacity in the Nissan is 79.5 cubic feet, and it's 83.9 cubic feet in the Honda. There are many available configurations that can accommodate some passengers as well as larger cargo, and this versatility is one reason why so many people are drawn to these types of SUVs. When the second and third rows are upright, the Pathfinder has 16.2 cubic feet of dedicated cargo space in the back, and the Pilot has 16.5 cubic feet.

The seating in the Pilot is comfortable and can be quite luxurious. Higher trims come with perforated leather with heating and ventilation, in addition to a two-position memory function and 10-way power adjustment. Push-button start is standard to make it easy to get the vehicle going, and most of the trims have convenient features like an auto-dimming rearview mirror, HomeLink remote system, and tri-zone climate control.

What may be surprising about the Pilot is that its LX trim only has a five-inch LCD screen instead of the eight-inch touchscreen that the other trims have. Seven speakers are standard, as is Bluetooth. At the EX trim, the vehicle is upgraded with Apple CarPlay, Android Auto, SiriusXM Radio, and HD Radio. On the top three trims, there is navigation and a rear-entertainment system with a Blu-ray player and 10.2-inch screen. At these levels, there is also Wi-Fi hotspot capability, a 590-watt audio system with 10 speakers, and an in-cabin PA system so people can clearly communicate with each other from the different rows.

The Pathfinder is nicely equipped as well, though it does start out more basic with the S model. Upgrading to higher trims can give people a 10-way power adjustable driver's seat with memory, a power adjustable front-passenger's seat, perforated leather seats, and heated and cooled front seats. Like the Honda, the Nissan SUV has standard push-button ignition. It also has an available remote engine start system, tri-zone temperature control, HomeLink technology, and numerous storage compartments in the cabin.

All models of the Nissan Pathfinder have an eight-inch touchscreen, Bluetooth, SiriusXM Radio, HD Radio, and six USB ports. The higher trims have navigation, SiriusXM Traffic, and a Bose audio system with 13 speakers. A back-seat entertainment system with two eight-inch monitors is available on the Platinum trim, and it can come with a DVD player to give people yet another entertainment option.

These vehicles are going to have the same standard components, such as a multitude of air bags, tire pressure monitoring systems, three-point seat belts, and a body frame that directs energy from an impact away from passengers.

Where the industry has really been making many strides is in the area of driver-assist technology. On the 2020 Nissan Pathfinder, every trim comes with automatic emergency braking to prevent the likelihood of frontal collisions, a rearview monitor to give people a clear picture of what's behind them while they're backing up, and a rear sonar system that can prevent scrapes and bumps while parking. Starting with the SL trim, the Pathfinder has blind spot warning, rear cross traffic alert, and advanced cruise control. In addition, the Platinum and SL have an Intelligent Around View monitor to provide a complete perspective of what's around the SUV.

The Honda Pilot has a complete package of driver-assist systems on every trim, and they're all part of the Honda Sensing Technologies package. Collision mitigation braking is what Honda calls it's automatic emergency braking system, and it complements forward collision warning. Road departure mitigation works in conjunction with lane keep assist, and lane departure warning emits a signal when an issue is first detected so that the driver has a chance to respond. The Pilot has adaptive cruise control to make long road trips a little more bearable. Automatic high beams are included with every trim, and blind spot and rear cross traffic monitoring are in the EX and the higher trims.

These vehicles would both be great investments for anyone looking for a three-row SUV that can last them for years, able to keep up with the demands of daily life. With powerful components, a nice assortment of high-tech features, and some luxurious details, it makes sense that the 2020 Nissan Pathfinder and 2020 Honda Pilot are priced where they are.

The Nissan Pathfinder starts out at $31,680. This isn't exactly budget-friendly, but it's not out of reach for many customers either. The SV is priced at $34,470, and for that, customers get fog lights, intelligent cruise control, remote engine start, and blind spot monitoring. The SL is next at $38,090, and it comes with LED headlights, navigation, leather-appointed seats, and heated front seats. The SV and SL Rock Creek Editions are more rugged models, each priced about one thousand more than their previous trims. At $42,920, there's the Platinum, which has 20-inch wheels, a Bose audio system, a dual panel panoramic moonroof, and heated and cooled front seats.

The base model of the Honda Pilot is in a similar position as that of the Nissan Pathfinder, priced at $31,650. The EX jumps up to $34,530, and for this additional cost, people will get to use smartphone integration, heated front seats, and blind spot monitoring. The EX-L costs about three thousand more than the EX, and it has leather seats and a power tailgate. With heated first and second row seats and a rear entertainment system, the Touring costs $42,720. Finally, the Elite feels like a luxury vehicle in more ways than one. It has heated and ventilated front seats, heated second-row captain's chairs, and a heated steering wheel. It comes with a hefty price tag of $48,220.

The lower trims of the Honda Pilot and Nissan Pathfinder are very comparable to each other. They have similar capabilities and interior features, and it may come down to design preferences. However, the base Pilot doesn't have an infotainment system nor smartphone connectivity.

The mid-level Honda and Nissan trims are attractive and would appeal to anyone who prefers driving a larger vehicle that has some high-end components. The Elite is priced well above the others, and it might not be worth the extra price. Most people would be more than happy with the Touring trim of the Pilot and the Platinum trim of the Pathfinder.

In the end, people who need a lot of towing capacity will likely go with the Pathfinder. The Pathfinder has some advanced components that make the vehicle a little more exciting, such as a 360-degree monitor. One thing that will push people towards the Honda , though, is its third-row leg room. In the end, the Honda may appeal more to those who like practical and traditional stylings, while the Nissan may be more intriguing to people who want something more unique.

Save Money on a 2020 Nissan Pathfinder:
Are you Shopping for a New Vehicle? Find the Best Deals with "Free - No Hassle" Prices Quotes.