2020 Nissan Sentra Pros vs Cons. Should You Buy? 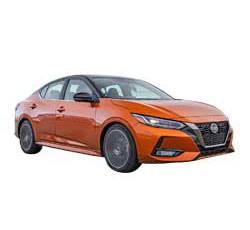 Should You Buy a 2020 Nissan Sentra? Here Are Some Reasons For and Against

With the new Sentra, Nissan has changed many things to make this sedan more appealing. The 2020 Nissan Sentra looks stylish and modern, and it has a good amount of interior space while still feeling agile and sporty. The S, SV, and SR are the three trims being offered on the 2020 Nissan Sentra, with each offering a bit more than the previous one in terms of the number and quality of exterior and interior components.


So many things have changed in 2020 with the Nissan Sentra. First, the engine has gotten an upgrade so it has more power. While the 2019 Sentra was available with a manual transmission, the 2020 Nissan Sentra is only available as an automatic. The platform of the car has been tweaked as well, and this has resulted in better handling. There are now a few more exterior paint colors available, including a striking two-tone option.

Inside the car, Nissan has enhanced a number of components, giving the Sentra a more high-end feel rather than looking like something that's obviously a budget-friendly vehicle. This is sure to be appreciated by those who need to get vehicles that are not priced too much over $20,000 but still want to feel like they're getting a lot out of their investments. Also, new safety features have been added to make the Sentra more competitive with other vehicles that feature multiple driver-assist systems.

The Sentra sits low to the ground and has a wide stance, and this makes it look like it's ready to charge at any moment. The available LED fog lights, LED headlights, and LED signature Daytime Running Lights help in this regard, as they're quite sleek. With the SR, the addition of a rear spoiler and chrome exhaust finisher enhance the athletic appearance of the Nissan Sentra.

Another component that's notable is the two-tone paint option. Customers can choose from either orange and black, white and black, or gun metallic and black if they want their cars to stand out with an edgy aesthetic.

Nissan has put a lot of effort into building the new Sentra with many standard driver-assist features. Intelligent cruise control gives the car the ability to independently adjust its speed in order to maintain safe distancing with other vehicles. Intelligent forward collision warning is a complementary feature to automatic emergency braking, which can detect not only other vehicles but also pedestrians in the Sentra's path. Lane departure warning is key for preventing accidents related to accidentally drifting out of one's lane.

Blind spot monitoring and rear cross traffic alert are two mechanisms used to make drivers more aware of their surroundings. They can be very helpful since it's not always possible for the driver to see in every direction. Likewise, a rearview monitor provides a clear view of what's behind the Sentra when it's in reverse. If the car gets to close to other objects, the driver will be warned. Automatic braking can engage if the driver doesn't have a chance to react in time.

The Nissan Sentra S is equipped with a seven-inch touchscreen, and the other two trims have eight-inch touchscreens. Bluetooth is included on all models, and Android Auto and Apple CarPlay are found on the SV and SR trims. These components make it easy to take part in hands-free phone calls, send and receive text messages, and have access to favorite songs that have been downloaded to a device.

With Nissan Voice Recognition, the infotainment system can understand select commands. This works to ensure that the driver is paying attention to the road and not the touchscreen. It can also be convenient to use the controls mounted on the steering wheel when adjustments need to be made.

So that devices can stay charged, one USB port has been built into the S trim, and two are found on the SV and SR trims. Those higher trims have SiriusXM Satellite Radio as well, giving people more choices for entertainment.

The Nissan Sentra runs on a 2.0-liter engine. With four cylinders and direct injection, the engine can generate 149 horsepower and 146 pound-feet of torque. The continuously variable transmission makes driving smooth and steady, including when the car is accelerating quickly.

As an affordable model, the Sentra has some high-end finishes that can make a difference in how sophisticated the cabin feels. The SV trim has premium cloth seats with the option to upgrade to quilted leather seats, and the SR comes with sport cloth with the option to get sport leatherette seats. Heated front seats are available in the SV and SR, as is a power-adjustable driver's seat. These trims have leather-wrapped steering wheels as a standard feature, and the SR has a leather-wrapped shift knob as well.

Other amenities, such as a heated steering wheel and remote engine start, are available if anyone wishes to equip their sedans with more convenient features.

Nissan has developed something called zero gravity seats. These seats have over a dozen different pressure points placed in strategic locations. The result is that people sitting in the seats will receive continuous support, and the overall load that the body has to carry will be reduced. These seats can go a long way in preventing fatigue on long road trips.

The back seat of the Nissan Sentra is configured as a 60/40 split bench. Either the entire bench can be folded down or just one side can be lowered. This is useful when people have large items to carry and wish to expand cargo capacity. The trunk itself is 14.3 cubic feet and has a relatively wide opening to make it easier to accommodate all kinds of gear.

A surround-view monitor is available on the Sentra, specifically the SR trim. It provides drivers with a 360-degree perspective of how they're doing in relation to other objects. It can be used when parking in tight spots in which every inch matters.

Two packages can be added on to the Sentra. The SV and SR each have their own premium package, and it can be convenient to have this option rather than picking and choosing from an overwhelming list of available upgrades. The premium package on the SV includes features like 17-inch wheels, heated front seats, and a power-operated moonroof that can slide and tilt open. The SR's premium package has those same components along with some other additions, such as a heated steering wheel, Bose premium audio system, 360-degree monitoring system, and a rearview mirror with an automatic dimming function.

Reasons Not to Buy a 2020 Nissan Sentra – The Cons

While most people will be happy with the engine on the Nissan Sentra, it might not satisfy everyone. Some other sedans come with a turbocharged engine that gives people something more to consider. Unfortunately, the Sentra just has the one engine, so anyone who wants more horsepower will definitely have to take this into consideration.

Leg room for back-seat passengers is 34.7 inches. This doesn't give people too much extra room to move around in, though it would be fine for smaller passengers. Customers who plan on having adults or taller teens in the back seat will have to check out the space in person to see if it will work for them.

The Sentra is exclusively a front-wheel drive vehicle. This is sufficient for many customers, but those people who live in colder climates might be looking for all-wheel drive models that can handle the snow and ice.

Nissan has put the Sentra in an optimal position in the market. Compared with other compact sedans, like the Toyota Corolla and Volkswagen Jetta, it comes out as a solid competitor. Unlike the Sentra, the Corolla doesn't have rear cross traffic alert and blind spot monitoring as standard safety components. For people who want some extra peace of mind as they drive on the roads, this can be an important factor. In a matchup with the Volkswagen Jetta, the Sentra comes out ahead when looking at trunk space.

Given it's low price point, the Sentra is a smart investment for anyone looking for a budget-friendly sedan. As a compact car, the Sentra manages to offer a decent amount of cargo space and has some versatility to it. It has a nice-sized engine and drives well, and it comes with many convenient amenities. Plus, its safety package is quite generous, and people will appreciate that the Sentra can be proactive about keeping them safe.


Save Money on a 2020 Nissan Sentra:
Are you Shopping for a New Vehicle? Find the Best Deals with "Free - No Hassle" Prices Quotes.