2020 Nissan Versa Pros vs Cons. Should You Buy? 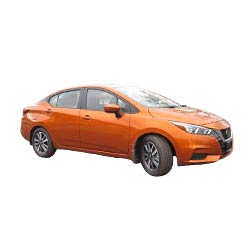 Should You Buy a 2020 Nissan Versa? Here Are Some Reasons For and Against

The Nissan Versa has a long history within the 21st century. Introduced to the U.S. market in 2006, is still ranks high in various lists for its affordability. In addition, the subcompact offers more room than its competitors. Hence, the reason the car is named he Versa. Allegedly, it's short for "versatile space."

The 2020 Nissan Versa continues the trend of high-end comfort for a low cost. With a refreshed exterior design, the four-door sedan is ready for the next phase of its life. However, does it have the stamina to compete against the other subcompacts on the market?

The third generation of this subcompact has received a complete makeover. Its profile is two inches lower and wider while the vehicle's length has increased approximately an inch and a half. To some, it resembles a smaller version of the Nissan Altima.

In addition to this, the Versa features a standard engine with a little more power than the previous model year. Furthermore, it contains more features as standards instead of upgrades or options. Due to these changes, another new item is a slight increase in price for the Versa trims.

The Versa has always been a comfortable vehicle for owners and those who rented them. In fact, more rental agencies across the globe may have owned a Versa over its lifetime than actual consumers. Nevertheless, those who drove it were impressed by the comfort it provided in a subcompact model.

With the increase in width, the 2020 Nissan Versa has even more comfort, and not simply in the seats. Options that increase the ease of driving include remote start to warm up or cool down the car's interior. It's new Automatic Temperature Control gives drivers the option of dialing in the right temperature. As an option, consumers can add heated front seats.

Those who drove previous model years of the Versa liked the performance and the fuel efficiency. What they didn't appreciate was the interior design. For some, it was a bit boring, even for a subcompact vehicle.

Nissan's engineers and designers heard the concerns of these drivers and transformed the interior of the 2020 Nissan Versa into something more appealing. The dashboard is more aerodynamic and makes the driver feel like they are in a high-end Nissan. The seat trim, cloth in the standard S trim and leatherette in advanced models, is smoother than previous models and features 6-way manual adjustments.

The redesign of the 2020 Nissan Versa includes an upgrade in the engine. While it's not something one would find in a BMW or Mercedes-Benz, it is better than it once was. Furthermore, it doesn't drop the fuel efficiency the subcompact is known for.

The engine in this year's Versa is a 1.6L four-cylinder engine with 122 hp. It is designed with Nissan's version of a CVT, the Continuously Variable Timing Control System (CVVTCS). In its active state, the CVVTCS maintains regular operations of the engine to prevent overheating and other issues related to acceleration.

The Versa has always been known for its fuel economy, and the 2020 version of the subcompact is no different. Across all trims, the subcompact gets an average of 30 mpg in the city and close to 40 mpg on the highway. Even with a smaller tank, the Versa is able to travel far with one fill-up.

5. Standard Safety Options Across all Trims

One of the additions to the 2020 Nissan Versa is the bevy of safety features that come standard on all trims. It does so without sacrificing its lower price. Of note is the amount of air bags -- 10 in total. It comes with the standard driver and passenger airbags as well as ones at the knees for the first row. In addition, it comes equipped with roof-mounted airbags in case of a rollover.

On top of this, the 2020 Versa comes standard with Electronic Brake Force Distribution and Assist, which activates when a driver slams on them. Other safety features are traction control, vehicle dynamic control to minimize spin outs, pedestrian detection, and lane assist. In other words, features you would normally find in higher-end sedans.

6. Reliability that is Predictable

Nissan has always been a company that prides itself on its engineering. It has been at the top of many lists for decades for its low maintenance needs. This is not any different with the 2020 Nissan Versa.

From the time it comes off the lot to the time it's sold to another lot as a pre-owned subcompact, the Versa maintains highly reliable for any type of driver. As long as regular maintenance is performed, of course. However, even then it maintains a strong reliability, though maintenance may be necessary at some point.

7. Decent Storage Capacity for a Subcompact

Sedans are not known for their storage capacity. Nor are subcompacts. Yet, the 2020 Nissan Versa has appropriate storage needs for various pieces of cargo. While it's not the grand scale of a crossover SUV, it seems to do the job.

The trunk offers 15 cubic feet of storage space -- more than some three-row SUVs. This allows for seven pieces of carry-on luggage. If something bigger needs to be shipped, the Versa offers a 60/40 split rear seat to extend the length of capacity.

8. Easy to Use Infotainment and Mobile Technology

The infotainment and mobile device needs of the 2020 Nissan Versa work to exceed those of other subcompacts on the market. The en-dash infotainment unit with its seven-inch touchscreen sits in the middle of the center stack. It features an intuitive layout of clearly marked and easy to reach knobs and buttons.

The implementation of smartphone connectivity packages Android Auto and Apple Play is standard across all trims, as are USB charging ports. Optional packages for the SV and SR trims include a six-speaker audio system and Sirius XM radio.

Subcompacts fall into two performance categories. Either they fail at city and highway driving and excel in fuel economy, or they excel at both. The 2020 Nissan Versa is in the latter category.

Nissan maintained the tuned-up suspension of the 2019 Versa in this year's model. This means both city and highway driving are smooth over multiple surfaces. In addition, the Versa can handle a tight turn radius. This is a plus in city driving where sudden turns may be required.

10. One of the Lowest Cost Subcompacts in Today's Market

Despite all of the new features on the 2020 Nissan Versa, it still maintains one of the lowest MSRPs on the market for its S trim. This is approximately $15K. Even at the SR sport trim the Versa comes in at a respectable $18K.

While consumers do a have a choice of manual and automatic transmissions on the 2020 Nissan Versa, there's only one engine. One the one hand, this might be a disappointment for those who are looking at their first Nissan. On the other, veteran owners probably known this already, so it's not a problem.

Though the horsepower on the Versa's new engine is slightly better than last year's model, it's still anemic. At 122 hp, the subcompact won't win any races, nor will it be able to pass vehicles on their way to a race. Then again, the Versa is known as a family/business car.

One would think the increase in length and width of the 2020 Nissan Versa would help expand room in the second row. However, consumers say this is not the case. In fact, the second row is, for lack of a better term, snug. This is particularly true for taller passengers who need to duck their heads and pull their knees closer.

Consumers have been impressed with the infotainment system's location in the center stack. They have also praised the clearly labeled knobs and buttons. What they haven't given good reviews to is the touchscreen. For many, it seems to be slow to respond, thus delaying certain aspects like getting directions or answering a hands-free phone call.

5. The Hatchback Version is Gone

One of the Versa versions previously made was the Note. It was a hatchback with more storage capacity than the subcompact sedan. Unfortunately, the Note was decommissioned this year. This leaves some Versa fans in a quandary, because they liked the storage capacity and the cost of the Note

In general, the 2020 Nissan Versa garners high marks across the board in technology, standard safety options, and price. In fact, it already top ten rankings in many categories. This makes it an above-average opponent against other subcompacts.

For instance, against older sibling Sentra, the Versa wins in exterior styling and extra legroom. When paired with the Hyundai Accent, the Versa has the advantage thanks to its standard safety features. Against the Mitsubishi Mirage G4, the Versa is ahead with a more powerful engine and easier drive.

The subcompact market is a crowded one, with each manufacturer vying for the attention of the consumer looking for a good car at an inexpensive price. Overall, consumers have a hard time losing by choosing the 2020 Nissan Versa.

With a fresh look, this year's model is no longer one to simply drive when a rental car is needed. It's a car that is stylish enough to stand out among other companies. With an upgraded engine and loads of safety features, the Versa is still a subcompact to keep at the top of the consideration list. Even if its price is slightly higher than the year before.

Save Money on a 2020 Nissan Versa:
Are you Shopping for a New Vehicle? Find the Best Deals with "Free - No Hassle" Prices Quotes.