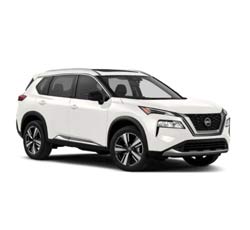 What 2021 Nissan Rogue Sport Trim Level Should you Buy? What is the Difference Between Trims?

The Nissan Rogue Sport is a relatively compact SUV that has modern stylings, a versatile cabin, and some attractive technology. It's a good option for anyone who likes the idea of driving an SUV but doesn't want anything that's too big or bulky. Nissan makes three trims of the Rogue Sport. Potential customers get to decide whether they want something more basic, a mid-level trim, or a model with some high-end features.

Before getting into the specifics of how each 2021 Nissan Rogue Sport trim differs from the others, it's a good idea to go over what they all have in common, starting with what's under the hood. All Nissan Rogue Sport models run on 2.0-liter engines. These engines have four cylinders and can generate 141 horsepower and almost 150 pound-feet of torque. This is a modest amount of capability, but what helps is the fact that the SUV can come with all-wheel drive instead of front-wheel drive.

Nissan has paired the engine with an Xtronic continuously variable transmission. As an automatic transmission, it's simple to use, and most people won't have to even think about its operation. There is, though, a manual shift mode in case anyone wants to have more control while accelerating or doing any other maneuvers.

As a compact SUV, the Rogue Sport can fit five passengers. The first row has two comfortable seats with a center console that can be used for storage. The second row has 33.4 inches of leg room. This isn't the most spacious of areas, but it should be sufficient for many prospective buyers who will rarely drive a full cabin full of adult passengers.

Cargo capacity when the rear seats are in place is almost 23 cubic feet. This doesn't quite compare with what mid-size SUVs can offer, but it's much more space than what one would find in the trunk of a sedan. Lowering the rear seats down can expand cargo capacity to about 60 cubic feet. Maximum cargo volume would be a little less if a moonroof is present. The second row of the vehicle has a 60/40 split configuration, giving people the ability to lower only one side down at a time.

2021 Nissan Rogue Sport S vs SV. What is the difference?

The SV stands apart from the S because it has several more features inside and outside of its cabin. On the SV, the front fog lights can be helpful when visibility is poor, and the LED turn signals that are built into the outside mirrors can make it easier for other drivers to know what the Rogue Sport is about to do. The roof rails on the SV can be used to secure certain types of gear.

Both models have a rear spoiler to add to their sporty nature, and the LED Daytime Running Lights and automatic headlights can be considered key safety features. On the two trims, there are 17-inch aluminum alloy wheels.

More differences are apparent when looking at the seating area. For instance, the S has cloth seats while the SV has premium cloth upholstery. In the SV, there are heated front seats and a heated and leather-wrapped steering wheel. These few elements can play a big role in keeping people comfortable in the winter months. Another difference is that the SV has a power-adjustable driver's seat with lumbar support. The driver's seat can be adjusted in eight ways, which is an improvement over the six ways in which the base model's driver's seat can be manually adjusted.

The type of climate system the Rogue Sport has can also affect the comfort level in the cabin. While the S has a manual air conditioning system, the SV has an automatic system that can be set to two temperatures, one for the driver and one for the passenger.

Entering and starting up the Rogue Sport can be simple and quick. The S has remote keyless entry and a tradition ignition, and the SV can be unlocked with a Nissan Intelligent Key and has push-button ignition. The "intelligent" key system means that the SUV can sense when the key fob is in close proximity; someone just has to touch the sensor on the door handle to unlock it, and the push of a button starts up the engine. On top of this, the SV can be remotely started. This is not only fun but also useful, especially when it's especially hot or cold outside and people want the cabin to get to a more bearable temperature before they get in.

Other convenient features on the Rogue Sport SV are a cargo cover and a special cargo organizer. The cargo cover can provide some privacy for when people have items in the back area, and the organization system gives people the ability to store smaller items out of the way. Because this organizer is under the floor, it doesn't really limit cargo capacity.

The infotainment system on the Nissan Rogue Sport uses a seven-inch touchscreen. Voice recognition, smartphone compatibility, Bluetooth, and the Siri Eyes Free program are all standard. This makes it easy to make calls, play certain songs, and check text messages. Plus, there's SiriusXM Satellite Radio in every trim. The S has a four-speaker sound system, and the SV has two additional speakers. Since this is the only difference in this area, it goes to show how nicely appointed the base model is.

In terms of safety, the story is similar. Both trims of this Nissan SUV have automatic emergency braking and pedestrian detection to reduce the chances of hitting another vehicle or person on the road. They also have lane departure warning and the ability to correct steering in order to center themselves in a lane. Blind spot monitoring and rear cross-traffic alert are standard as well, which is really nice since that's not always the case in the industry amongst other vehicles in this price bracket. A rearview monitor and rear sonar system provide important information when people are in reverse. If the Nissan is about to back up into an object, the rear automatic braking system can engage.

A few things are optional on the SV. There's the opportunity for this trim to be enhanced with a 360-degree monitor, and people can get ProPILOT assist and a driver alert program with this trim. ProPILOT assist can help to control acceleration, braking, and steering in certain situations, so it's basically like a semi-autonomous system that people can set up when they feel it would be appropriate. The driver alert program can remind people when it seems like they need to re-focus their attention on the roads.

2021 Nissan Rogue Sport SV vs SL. What is the difference?

The top-level SL has many exclusive features. First, it's the only one to ride on 19-inch wheels. While not standard, a power moonroof is an option on the SL. Getting one of these can really enhance the atmosphere in the cabin. In addition, there's the option to enhance the SL with LED headlights and fog lights. Interestingly, fog lights are standard on the SV trim.

Nissan has put in leather seats into the more sophisticated SL trim. Note that the SV has premium cloth, but can be upgraded with leatherette. Both trims have the option of getting a memory system that can remember the driver's preferred seating position as well as the position of the side mirrors. On the SL, there is an available power-adjustable front passenger's seat. A minor difference that is still noticeable is that the SL is the only trim to have a seatback pocket behind the driver's seat. It can be useful for storing smaller items and reading material.

When moving on to the infotainment system in the SL, it becomes clear why this model is priced higher than the others. It has been upgraded with a navigation system that can provide people with door-to-door directions. Because it can factor in current traffic conditions with SiriusXM Traffic and Travel Link, the program can provide the most efficient route from one point to another. A Bose premium audio system is available on the SL trim only. It has a subwoofer to really round out the sound.

The SL has all of the previously mentioned safety components. It can keep itself centered in a lane, hit the brakes if necessary to avoid an accident, and warn drivers about particular issues. The SL has the addition of a driver alertness system, ProPILOT assist, and the all-around camera view that are all available on the mid-level trim. It can be so reassuring to have all of these features since a lot can happen on the road in only a split second.

Determining which of these three trims would be best comes down to individual preference. They all have the same performance specifications, and all of them can have front-wheel or all-wheel drive. In a way, this makes it easier for people to choose their favorite trims since they all handle themselves in the same way.

From a safety standpoint, the SL has the best components. It's like this trim goes above and beyond in terms of playing an active role in keeping people safe. However, the base model has plenty to appreciate, and the mid-level trim has some attractive add-ons.

The real differences are seen in the cabin. One has to decide things like whether cloth or leather seats are better, how much they would value having a navigation program, and whether the smart entry system and remote start function are worth the added cost of the SV and SL trims.

For many people, they are. Considering that the SV and SL are modestly priced with starting costs of under $30,000, many people might decide to treat themselves to a nicer trim of the Nissan Rogue Sport. Getting the SL means that someone can take advantage of the latest in technology, and it would be hard to pass up that opportunity.

Of course, if budget is a concern, the S is going to be perfectly fine. In some ways, it might feel basic, but it has what many would consider to be "must-haves." It still has Apple CarPlay, Android Auto, and a large touchscreen, along with several driver-assist systems.