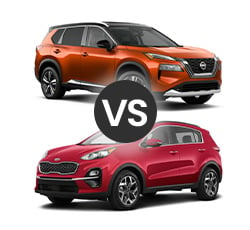 The SUV market is pretty crowded these days. This is a good thing for customers, since it means that they'll have plenty of choices. Competition brings out the best in everyone, and companies have been really focused on quality, reliability, and technology as they've designed their latest models. If anyone is looking for a two-row SUV that has good value and feels modern, then the 2021 Nissan Rogue and Kia Sportage will likely be on his/her list.

There are several similarities when it comes to the Rogue and Sportage, starting with their available powertrains. The Nissan Rogue comes with only one option for its engine. It's a 2.5-liter, four-cylinder engine that has 181 horsepower and 181 pound-feet of torque. Three out of the four Kia Sportage trims use 2.4-liter, four-cylinder engines that have that same exact amount of horsepower, along with 175 pound-feet of torque.

There is one other option for the Kia Sportage. Its SX Turbo trim is powered by a 2.0-liter turbocharged engine. With the turbocharger, this version is much more powerful than the standard engine. It's able to generate 240 horsepower and 260 pound-feet of torque. Obviously, this is going to be the trim to pick if anyone really values performance and wants to have some fun on the roads.

Regardless of engine choice, the Kia Sportage has an electronically controlled six-speed automatic transmission. It has a Sportmatic feature that allows drivers to manually control shifting. It's totally optional, so it can be thought of as a bonus feature that some drivers might enjoy using once in a while.

In the Nissan Rogue, there's a continuously variable transmission. It, too, has a manual mode. Every trim comes with paddle shifters that are located on the steering wheel, and these can be used to manually shift up or down. The Rogue has two drive modes - Eco and Sport - that people can select if they want to either maximize fuel efficiency or make their SUVs feel a bit more aggressive. The Kia has those same drive modes as well.

Two other drive modes that are available in the Nissan Rogue are Snow and Off-Road modes. These are offered as long as the Rogue is equipped with all-wheel drive. Many people choose to get all-wheel drive because it enhances traction when the roads are slippery. Likewise, the Kia Sportage is available with all-wheel drive, and it has a locking center differential that can be engaged if necessary. With both models, the default option would be front-wheel drive.

Knowing that a new vehicle comes with a warranty can give a customer some peace of mind. The Nissan Rogue's powertrain coverage is good for five years or 60,000 miles, whichever comes first. The Kia Sportage's powertrain warranty is much more generous, as it's valid for ten years or 100,000 miles.

These models have an ideal size. They're versatile and have plenty of cargo room, and they're still quite easy to park. This means that they can appeal to people who live in more urban environments just as much as they can attract attention from those who don't ever have to worry about fitting into certain parking spaces.

In the Sportage, there's definitely room for five people, but there's less room for cargo. Leg room is 41.5 and 38.2 inches in the first and second rows, and this is comparable to what the Nissan offers. The bigger distinction between the two models is evident when comparing cargo capacity. When the Sportage's rear seats are up, cargo volume is 30.7 cubic feet. When those seats have been folded down, maximum cargo capacity is 60.1 cubic feet. To some buyers, the fact that the Rogue has almost 15 cubic feet more space to hold cargo is going to be an important point.

Given all the innovations in the field, it makes sense that technology plays a role in drivability. High-tech features can make so many things more convenient, and many people are accustomed to having instant access to all kinds of information.

In the Nissan Rogue, every model has Apple CarPlay, Android Auto, Bluetooth, SiriusXM, voice recognition, and either an eight- or nine-inch touchscreen. A model with the larger touchscreen would have integrated navigation and SiriusXM Traffic and Travel Link. Most trims have Wi-Fi capability, and some have wireless charging, Bose audio systems, and four total USB ports. The base model has two USB ports.

An eight-inch touchscreen is also what the Kia Sportage has. Its trims have smartphone compatibility and Bluetooth, too. SiriusXM is an option on the mid-level trims and standard on the SX Turbo trim. That SX Turbo trim has voice-command navigation and a Harman Kardon premium sound system. All trims have a USB port up front, with some having an additional USB rear charging port and wireless charging.

Just like the Nissan and Kia companies have focused on integrating advanced infotainment systems into their vehicles, they've also given these SUVs many high-tech safety features. Both of their entry-level trims have a few driver-assist systems, with the higher trims having more comprehensive safety packages. At least with the lower trims, the Rogue does have more to offer.

The base model of the Kia Sportage has forward collision-avoidance assist with pedestrian detection, so it can actively work to prevent a frontal collision with another car or a person in the road. It has lane keeping assist, which can alert drivers when they're drifting out of their lanes and correct steering to re-center themselves. The Sportage also has Driver Attention Warning, an alert system which engages if it seems like a driver isn't paying attention to the road.

With the entry-level model of the Nissan Rogue, there is automatic emergency braking, forward collision warning, pedestrian detection, intelligent driver alertness, and lane departure warning. The Rogue's lowest trim doesn't have the same corrective steering ability as the Sportage has, but it has several other features. It comes with blind spot warning, rear cross traffic alert, a rear sonar system to help with parking, and reverse automatic braking.

Mid-level trims of the Sportage are enhanced with blind spot and rear cross traffic warning, and the top trim has adaptive cruise control. Mid-level trims of the Rogue have intelligent lane intervention and intelligent blind spot intervention to help drivers avoid accidents, and they have adaptive cruise control and 360-degree monitors. In the top trim, the sonar system is upgraded with sensors on the front, rear, and side of the vehicle. Further, the top trim of the Rogue has a head-up display and traffic sign recognition. This means it can remind drivers of important signs and notifications that they should be mindful of.

Both models have four available trims. The Kia Sportage's trims are the LX, S, EX, and SX Turbo, and the Rogue's lineup consists of the S, SV, SL, and Platinum. This makes it a little easier to compare the models in terms of their value.

Previously, the differences in safety and infotainment were discussed. This may be part of the reason why the Rogue has a higher price point than the Sportage does. Also, the Nissan Rogue is a bigger vehicle, and sometimes customers are asked to pay more for that additional space.

In terms of seating, the two models are pretty similar. They start out with cloth seats and manually adjustable front seats. Their mid-level trims can have heated front seats and power-adjustable driver's seats. The SL trim of the Rogue has leather seats, and the sophisticated Platinum trim has quilted semi-aniline leather upholstery. In the Sportage, the middle two trims have synthetic leather, with the SX Turbo having leather seats. The SX Turbo has heated and ventilated front seats, while the Rogue's Platinum has heated front seats, heated rear seats, and a heated steering wheel.

From the exterior, the two SUVs look fairly athletic and have modern aesthetics. Notably, the Rogue comes standard with LED headlights, LED taillights, and LED Daytime Running Lights. The top two trims of the Nissan have motion-activated liftgates, LED fog lights, and panoramic moonroofs, and most trims have heated side mirrors.

With the Kia Sportage, only the top trim has LED headlights, LED fog lights, and LED taillights, but all trims do have LED Daytime Running Lights. The Sportage also has many trims with heated side mirrors. Its top two trims have hands-free liftgates, and its top trim has a panoramic moonroof.

From many perspectives, the Nissan Rogue has the better package. It has a few more standard safety systems, the more attractive infotainment system with SiriusXM, an available 360-degree camera and head-up display, and higher quality exterior features. Plus, it has more cargo space than the Sportage does. For all of these reasons, it's going to be able to attract a lot of attention from prospective buyers.

However, all of these benefits come at a cost. While the base model of the Rogue is relatively affordable, the other trims may come with price tags that may have some customers thinking twice about whether these would be practical purchases.

Keep in mind that the Rogue doesn't have a turbocharged engine like the Sportage does. This is a huge factor that works in the Kia SUV's favor. Anyone who is looking for a highly capable vehicle will certainly be intrigued by the SX Turbo trim of the Kia Sportage. Even with this turbo engine and its enhanced capability, the SX Turbo is still cheaper than the Platinum trim of the Nissan Rogue. Overall, the Kia Sportage will appeal to customers who maybe aren't keen on spending too much money on their next vehicles. The SUV has a youthful feel that can be very refreshing.

The reality is that both SUVs would be solid choices. Customers just have to weigh all the different factors when choosing a model.