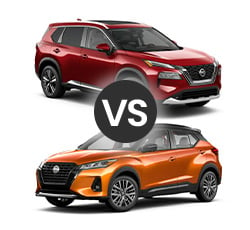 2021 Rogue vs Kicks - How do they stack up? What are the differences?

Nissan has made a name for itself by designing stylish, modern vehicles that have a lot of value. The Rogue and Kicks are two options to consider for anyone in the market for a new SUV. The Kicks is considered a compact vehicle, while the Rogue is a mid-size SUV. As the larger model, the Rogue is more powerful and has some nicer components, but the Kicks is definitely more affordable. This overview will go further into detail to highlight how these two SUVs are distinct from each other.

Perhaps the most noticeable difference between the Kicks and the Rogue is related to size. The Kicks is small, having a length of 169.1 inches. This makes it shorter than the average sedan and certainly most SUVs. The Kicks is 69.3 inches wide and 63.3 inches tall. It sits about seven inches off the ground.

In comparison, the Nissan Rogue has a traditional SUV frame. It has a length of 183 inches, its width is 72.4 inches, and its height is 66.5 inches. Having a ground clearance of 8.2 inches allows it more easily clear obstacles, and this gives drivers a higher perch from which they can see the road.

As one would imagine, the Rogue has a more spacious cabin than the Kicks has. In the Rogue, there is 43.3 inches of leg room in the first row and 38.5 inches of leg room in the second row. This means that adults can be fairly comfortable in the back, even if three people are sitting together. There's enough shoulder, hip, and head room so that the back seat doesn't feel too cramped.

The Kicks doesn't have that kind of space in its back seat. It only has 33.5 inches of leg room in its second row. On short trips, this should be fine, but adult passengers riding in the back would likely feel a bit uncomfortable on long road trips. First-row leg room, on the other hand, is great in the Kicks. It provides the driver and front passenger with up to 43.7 inches of leg room.

Many customers are attracted to SUVs because of their cargo space and versatility. Both vehicles have rear seats that can be quickly folded down to make more room for larger items. The Rogue has a maximum cargo capacity of 74.1 cubic feet. This is a generous amount of space, allowing bikes, skis, and other equipment to be easily accommodated. Cargo capacity in the Kicks is only 32.3 cubic feet. This is a huge difference that will likely influence a potential customer.

As the smaller model, the Kicks has a different vibe to it. It has a more futuristic appearance versus the more traditional feel of the Rogue. It has an available two-tone look, and its angled lines, large front grille, and narrow headlights make it look quite stylish. The Rogue has recently been redesigned, and it, too, has modern lighting and sharp lines. It has a boxier frame, so it comes across as more rugged and durable than the Kicks does.

In general, the exterior features on the Rogue are going to be preferred, at least from a quality standpoint. The Rogue comes standard with LEDs in its taillights, headlights, and daytime running lights. Every trim of the Rogue has UV-reducing solar glass and a rear spoiler, and some trims have motion-activated liftgates, heated side mirrors, panoramic moonroofs, and LED fog lights. On the Kicks, halogen headlights are standard, and LED headlights, daytime running lights, and fog lights are available. Some Kicks trims can also have heated side mirrors, but many of the other features that the Rogue has simply aren't an option.

Another reason why the Rogue stands apart form the Kicks is that it has a more powerful engine. The Nissan Rogue runs on a 2.5-liter engine with four cylinders. This engine can make 181 horsepower and 181 pound-feet of torque. Every Rogue trim is available with all-wheel drive to provide additional traction when the conditions aren't so great.

A smaller engine is found in the Nissan Kicks. It has four cylinders, like the one in the Rogue, but it has a displacement of 1.6 liters. This gives it the ability to generate 122 horsepower and 114 pound-feet of torque. Notably, the Kicks is exclusively offered as a front-wheel-drive vehicle. To be realistic, front-wheel drive and 122 horsepower are going to be perfectly acceptable for many people, the vast majority of the time. However, it may not be enough to attract attention from certain types of buyers in the first place.

Both models use Xtronic continuously variable transmissions. These allow for smooth transitions at various levels of speed. The Rogue is enhanced with a manual mode, which gives drivers the option to choose when they'd like to shift. They can shift gears using paddle shifters that have been mounted on the steering wheel. Front-wheel-drive Rogues have Eco and Sport modes for those times when people want to drive more or less aggressively. All-wheel-drive Rogues have the addition of Snow and Off-Road modes.

Fuel efficiency is going to be the area in which the Kicks has the advantage. It does very well in this department, being able to earn 36 miles per gallon on the highway. In the city, it still manages to have a fuel economy of 31 miles per gallon. The Rogue doesn't do poorly, but it's just not as efficient because it's larger and more powerful. Front-wheel-drive Rogues have an estimated fuel economy of 35/27 (highway/city) miles per gallon. Those numbers drop to 33 and 26, for the highway and city, if the SUV has all-wheel drive.

The Nissan Rogue does even better, though. Its available amenities include tri-zone climate control, rear sun shades, an auto-dimming rearview mirror, side mirrors that can tilt-down to help with steering when in reverse, illuminated mirrors on the sun visors, and interior accent lighting. It can also have a Divide-N-Hide storage system in the back to make it easier to keep the cabin organized.

Both modes start out with the same type of seating. Their entry-level trims have manually adjustable front seats and cloth upholstery. Mid-level trims of the Rogue can have heated steering wheels, heated front seats, leatherette or leather seats, leather-wrapped steering wheels, and power-adjustable front seats. The highest trim of the Rogue takes it a step further with heated rear seats and quilted semi-aniline leather seats to add more sophistication into the cabin.

With the Kicks, leather is not an option. Its highest trim comes standard with sport cloth seats. They have orange accents and stitching to add some visual interest. This trim has the option to get a synthetic material called Prima-Tex. Heated front seats are available, but not standard, and the same is true for a heated steering wheel. The top-trim does have a leather-wrapped steering wheel and shift knob.

All Kicks trims have some unique elements to them. They have painted shifter trims with chrome accents, and they have metallic accents throughout the cabin. This adds to the edgy vibe of the vehicle.

To be truthful, many consumers would be okay without leather seats and the other extra amenities. While certainly nice to have, they might not have too much of an affect on daily drives. One thing that would enhance their overall driving experience, though, is an advanced infotainment system.

Fortunately, both the Kicks and Rogue come standard with touchscreens, Bluetooth, and smartphone compatibility. In the Kicks, the base model has a seven-inch touchscreen, while the other two trims have eight-inch touchscreens. The sound system has six speakers, and the top two trims have SiriusXM Satellite Radio. Either three or four total USB ports can be integrated into the Nissan Kicks. Its most premium trim can be upgraded, at an additional cost, with a Bose eight-speaker sound system, a Wi-Fi hotspot, and NissanConnect Services.

Things are bit more advanced in the Nissan Rogue. Its first three trims have eight-inch touchscreens, and its highest trim has a nine-inch touchscreen. That larger touchscreen comes with navigation, a Bose premium audio system, wireless charing, and SiriusXM Traffic and Travel Link. Most trims have NissanConnet Services and four USB ports, and every Rogue trim has SiriusXM Radio. When it comes to technology, more is better, and the Rogue certainly has the more attractive package.

In recent years, Nissan has worked hard to enhance its vehicles with driver-assist technologies. The Kicks and Rogue have impressive collections of these types of systems.

The two models can warn drivers about potential frontal collisions and help them slow down in an effort to prevent accidents, they can detect pedestrians in the road and take evasive measures to hopefully avoid them, and they can warn drivers when they're veering out of their lanes. In the Rogue, an available mitigation system can correct steering if the vehicle is drifting out of position.

It's not that common to find blind spot and rear cross-traffic alert in entry-level trims. Nissan has made those two features standard in the Kicks and the Rogue. Plus, they have rear vision cameras and rear automatic braking, which can really come in handy when it's difficult to see traffic and other obstacles that may be in the vehicle's path. Available on both models is an all-around view monitor.

The Rogue has some addition systems to make parking easier. It has a standard rear sonar system, with front and side sonar systems being available. These can provide drivers with useful information about how close they are to other objects.

Both SUVs have intelligent cruise control. Like traditional cruise control, this program can maintain a set speed. It can also adjust the speed if the vehicle in front of the Nissan has slowed down. If that other vehicle subsequently speeds up, the Nissan can speed up, safely, as well. In the Rogue, the system is called ProPILOT Assist because it has a steering assist function built into it.

From a price perspective, these vehicles are in very different categories. The Nissan Kicks is appealing because it has a starting price of only $19,500. Its mid-level trim costs $21,300, and its top trim has a competitive price of $21,940.

The entry-level Nissan Rogue costs more than the most premium Kicks available. The S trim of the Rogue has a starting price of $25,750. When considering this price tag, it makes sense that the Rogue has so much more to offer. The SV trim of the Rogue is priced at $27,440, the SL trim costs $32,100, and the Platinum tops off the list with a cost of $35,530. The Rogue may be affordable for some customers, but its higher price tag may drive some potential buyers away.

These two models may be similar, but they differ in important ways. The Rogue is bigger, stronger, and more upscale, but people will have to pay a somewhat premium price for this mid-size SUV. At the same time, the Kicks has a lot to offer for a compact vehicle, and it has some impressive technology and safety components. It could be perfect for those who want to drive something modern and versatile but don't need anything too big.