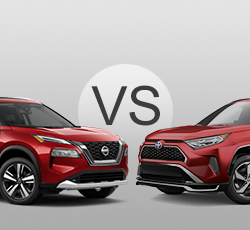 2021 Rogue vs RAV4 - What is the Difference Between Them? Which is Better?

Buying Tip: Before you walk into a dealership, price shop Online first. Avoid overpaying by using the following pricing services:
• Car Clearance Deals
• NADAguides
• CarsDirect
• Motortrend
With these services you can:
• Force dealers to compete for your business.
• Start your own online price war.
• Many prices are not advertised online.
• It's Free and No Obligation.

The Nissan Rogue and Toyota RAV4 are two-row SUVs that have relatively large cargo areas, capable engines, and many high-end amenities that are available in their higher trims. Potential customers looking for practical SUVs will likely be considering these two models. Built by companies that are known for designing reliable vehicles, the Rogue and RAV4 have many similarities. However, there are some key differences that this overview should highlight, and this should help potential buyers narrow down their choices.

Under the hood of a Nissan Rogue, there's a 2.5-liter engine. It has four cylinders, and it's able to generate 181 horsepower and 181 pound-feet of torque. This is a respectable amount of capability, if not being terribly exciting. Most people should be pleased with this engine if they're just using their vehicles for regular commuting and the occasional adventure out of town. The Rogue can be used to tow up to 1,350 pounds.

There's a 2.5-liter engine in the Toyota RAV4, too, but it's a little more powerful. It has 203 horsepower and 184 pound-feet of torque. It has been matched with an eight-speed electronically controlled automatic transmission.

There's also the option to get a hybrid version of the RAV4. These models use 2.5-liter engines and electric motors. The net horsepower generated is 219, so there's even more power in a RAV4 Hybrid than in the traditional RAV4. Toyota has paired the hybrid powertrain with an electronically controlled continuously variable transmission. (There is an additional version of the RAV4, which is a plug-in hybrid version called the RAV4 Prime. It's actually the most powerful RAV4 in the market right now. For the purposes of this overview, only the RAV4 and RAV4 Hybrid will be discussed.)

Every trim of the Nissan Rogue has a standard front-wheel drivetrain. All-wheel drive is an option if people would prefer to have the additional traction. The all-wheel drive system can turn on automatically when it senses an issue with traction, so drivers don't have to think about when to use it or turn it off. Rather, the vehicle itself will be able to determine when power should be sent to the various wheels.

Nissan has given the 2021 Rogue an Xtronic continuously variable transmission. As an automatic transmission, it's very easy to use and makes the vehicle drive smoothly. There are paddle shifters that can be used when drivers want more control over shifting, and there's a Sport mode that can make the engine a bit more responsive. In addition to Sport mode, there's an Eco mode that can boost efficiency. Models with all-wheel drive will come with two additional modes, which are Snow and Off-Road modes.

In the RAV4, there aren't paddle shifters, but there is something called sequential shift mode. Basically, it does the same thing as paddle shifters, as it gives drivers control over when to change gears, if they prefer. The RAV4 also has different drive modes. A standard model will have Sport, Eco, and Normal drive modes. Those with all-wheel drive will have a few more modes, to include Mud & Sand, Rock & Dirt, and Snow modes.

Of course, there's the hybrid version of the RAV4 to consider. It's able to earn up to 41 miles per gallon in the city and 38 miles per gallon on the highway. It's definitely going to attract attention because of this level of efficiency.

These two models have a good size to them, but they're still really easy to handle. The Nissan Rogue has a length of 183 inches and is 72.4 inches wide. The RAV4 is slightly shorter, but it's a touch wider than the Rogue.

How do the interior measurements compare? Well, the Rogue has 43.3 and 38.5 inches of first-row and second-row leg room. In the RAV4, leg room is 41 inches in the front row and 37.8 inches in the second row.

In either model, there's some flexibility in the cabin. The rear seats in the Nissan Rogue and the Toyota RAV4 have 60/40 split configurations. People can either fold the entire row down or just lower one side, leaving the other side available for passengers.

Modern consumers are likely going to be interested in the technology packages in these models. Most of the trims of the Nissan Rogue have eight-inch touchscreens, with the most premium trim having a nine-inch touchscreen. That larger touchscreen comes with an integrated navigation program that can take traffic into account as it provides drivers with turn-by-turn directions.

Voice recognition has been built into the infotainment system on every Rogue trim, as are Android Auto and Bluetooth. Unfortunately, wireless Apple CarPlay is only included with the more advanced touchscreen. Most, but not all, trims have Wi-Fi capability, and all trims have SiriusXM to provide more entertainment options.

A seven-inch touchscreen is found in the lower trims of the Toyota RAV4. It comes with Android Auto and Apple CarPlay, as well as Amazon Alexa, Bluetooth, and SiriusXM. Amazon Alexa can be a convenient feature to have, as it provides people with access to all kinds of information. Higher RAV4 trims could have eight-inch touchscreens, JBL speaker systems, and integrated navigation. There could be up to five USB ports in a RAV4. In comparison, the Rogue could have four.

There's a lot of good news when it comes to how safe the Rogue and RAV4 are. In both models, there is standard forward collision warning and automatic emergency braking. This can play a role in preventing many accidents; drivers will be warned when they're approaching other vehicles too quickly, and the SUVs have the ability to slow themselves down. Both vehicles can also warn drivers when they're drifting out of their lanes, gently correct steering to re-center themselves, and adjust their speed if its necessary to stay a safe distance away from other vehicles.

Further, the Nissan Rogue comes standard with blind spot and rear cross-traffic monitoring. These two components are optional on the lower trims of the RAV4 and standard on all of the rest. Impressively, most of the Rogue trims have Intelligent Around View Monitors to provide their drivers with 360-degree perspectives of how they're doing in relation to other objects. Only some of the RAV4 trims have this feature, which Toyota calls a Bird's Eye View Camera.

The list of standard features is extensive, so this description can really go on and on. Automatic high beams, anti-lock brakes, and three-point seatbelts are some examples of the other components that are in place to keep passengers safe.

This overview has already covered how the two models compare when it comes to powertrain, technology, and safety. Those are really big areas of concern for consumers, but there are also other things that matter, like exterior and interior features.

The Nissan Rogue starts out with pretty nice exterior components. Its base model has LED headlights and LED taillights. Mid-level trims are enhanced with LED fog lights and heated side mirrors, and the higher trims have panoramic moonroofs and hands-free liftgates.

Inside the cabin of a Rogue, there could be cloth, leatherette, or leather seats. The steering wheel could be wrapped in leather, and it could be heated, too. Both the front and rear seats can be heated. All models have either remote entry or a smart key entry system, and push-button start is standard.

LED headlights and taillights are standard in the Toyota RAV4 as well. However, it can come with adaptive front lighting, in which the angle of the lights can be adjusted if necessary to better light up the roads. A moonroof and hands-free liftgate are also available in the RAV4, as are LED fog lights. In general, there is a lot of overlap in the two models, but the RAV4 has more customization options. Different trims may have different types of badging and exterior accents.

Seats in the Toyota could be covered with fabric upholstery or SofTex, which is a synthetic leather. Toyota goes beyond what Nissan has done by offering heated and ventilated front seats. Like the Rogue, the RAV4 can have a heated and leather-wrapped steering wheel and heated rear seats. There are some trims of the RAV4 that have their own unique style in the form of accent colors or special lighting.

There are some key factors to consider when deciding between the RAV4 and the Rogue. The RAV4 has the hybrid option, and this will likely be important to many consumers. The RAV4 is also the more powerful of the two models. It has more horsepower and torque, and it can tow heavier loads.

The Nissan Rogue could win the matchup when looking at interior space. It has a little more leg room than the RAV4 does, and it has greater cargo capacity. For people who frequently transport sports gear or other bulky items, every inch might matter.

The Toyota RAV4 may have a broader appeal since it has so many trims. It will definitely be noticed by eco-conscious consumers and those who are looking for powerful, reliable two-row SUVs. On the other hand, the Nissan Rogue has a modern vibe to it, and it gives people the opportunity to have leather seats and all sorts of high-tech components. (Something missing, though, in many of its models is Apple CarPlay.) The Rogue's base model is cheaper than that of the Toyota, and this may be one thing that pushes certain consumers towards the Rogue.

In the end, it's a tough matchup. The RAV4 has certain qualities that will definitely attract certain types of buyers, but keep in mind that the Rogue still comes with many benefits.

Save Money on a 2021 Nissan Rogue:
Find New Car Clearance Prices - Many Vehicles are Selling Below Dealer Invoice Prices.

Every dealer offers a secret price. Many prices are below invoice. Find yours here.
In Depth 2021 Nissan Rogue Comparison Guides: