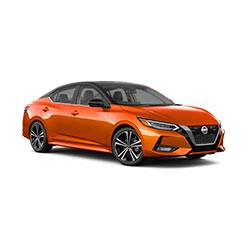 What 2021 Nissan Sentra Trim Level Should you Buy? What is the Difference Between Trims?

As one of the smaller Nissans, the Sentra is going to attract people who don't necessarily need the bulk and size of a larger sedan or SUV. The 2021 Nissan Sentra looks more expensive than it actually is, and it has just enough features to make it a good investment.

For the 2021 model year, the company hasn't made too many changes to the Sentra. What's great is that it has made Apple CarPlay and Android Auto standard parts of the infotainment system. The top-level SR trim has some more options, to include a two-tone exterior color scheme with electric blue and black. Its technology package can be enhanced with Wi-Fi capability and NissanConnect services. This all means that people don't have to sacrifice their connectivity when choosing to get a Sentra.

This compact car has two rows of seating and four doors. Leg room in the front is a very spacious 44 inches. In the back, there is a little less than 35 inches of leg room. This isn't huge by any means, but it's enough space to accommodate adults. It would be possible to fit three adults in the back, but truthfully, that might be a tight squeeze. The trunk of the Nissan has a practical size, having a volume of 14.3 cubic feet.

Compare the 2021 Nissan Sentra S vs SV Trim Levels. What is the difference?

One of the most important things to note about the Nissan Sentra S is that it only costs approximately $19,400. It can be hard to find quality vehicles that have price tags below the $20,000 mark. The SV costs about $1,000 more than the S. To some, this may not be a big deal, but it would be a deciding factor for others.

What do customers get for that extra money? For starters, the SV comes with a remote engine start. This can be very convenient, especially when it's hot or cold outside and people want to have their cabins become more comfortable before they get in.

The seven-inch touchscreen on the S is increased to a size of eight inches on the SV. There's also a seven-inch driver information display behind the steering wheel on the SV. It can provide people with an easy-to-read source of key vehicle data. It compares with the 4.2-inch display on the base model. The audio system on the S only has four speakers. This is fine, but far from what one would consider a premium system. The SV gets a bit closer to an ideal configuration, having eight speakers. It has the addition of SiriusXM Satellite Radio, and this feature can be very much appreciated by people who like listening to a variety of music and entertainment channels.

Making it easier for everyone to keep their devices charged are multiple USB ports in the SV. It has two regular USB ports and one USB-C port. There will be less competition for the chargers if three devices can be plugged in at once.

As mentioned, it is nice that Nissan changed the S for the current model so that it comes with Apple CarPlay and Android Auto. Plus, the S has Bluetooth for hands-free calling and streaming audio.

The cloth seats on the S are upgraded to premium cloth seats on the SV. The SV has a leather-wrapped steering wheel, and heated seats are available if anyone wants to have that extra element of warmth in the winter. Other features related to seating are actually fairly basic in the SV. However, it does offer the option of getting a power-adjustable driver's seat and quilted leather-appointed seats.

It may be more convenient to have the dual-zone automatic climate system in the SV rather than the standard manual climate system in the S. It's easy to unlock and get the SV started, since it uses a Nissan Intelligent Key. In the S, there is a remote entry key fob, but someone still has to physically push a button to unlock the doors. In the SV, the key fob can stay hidden in a pocket while the driver just touches a sensor on the handle to unlock the doors. As previously mentioned, the remote start function is great to have.

The S does have a nice appearance, thanks to some angular features built into its headlights and front grille. The car sits low to the ground and looks fairly athletic. On the S, there are automatic headlights and 16-inch steel wheels. A few things are upgraded when moving to the SV. While it also has 16-inch wheels, the SV has aluminum-alloy versions instead of steel ones. On the S, there are heated outside mirrors to help combat the cold weather, and a power moonroof is available.

Under the hood of every Nissan Sentra, there's a two-liter, four-cylinder engine. It delivers almost 150 horsepower and nearly 150 pound-feet of torque, and it's been paired with a front-wheel drivetrain. To be honest, this engine isn't incredibly exciting, but it's sufficient.

A bonus of having this type of engine is that the Sentra has excellent fuel economy. It's estimated that this Nissan sedan can travel up to 39 miles on the highway using a single gallon of gas. Fuel economy for city driving is an estimated 29 miles per gallon.

Keeping people safe on the S trim are many impressive driver-assist systems. Rear automatic braking can work to prevent accidents resulting from drivers not being able to see what's behind them. Similarly, automatic emergency braking can lessen the likelihood of getting involved in a front collision. With forward collision warning, drivers will be alerted to a dangerous situation with another car or pedestrian. In other situations, drivers will also be warned. This includes those times when someone is veering out of a lane, about to change lanes when another car is in a blind spot, and when a driver is about to back up into cross traffic.

Other parts of the safety system include a driver alertness monitoring system, automatic high beams, stability mechanisms, and Hill Start Assist. Hill Start Assist keeps the Sentra from rolling backwards when stopped on a hill. A driver can engage this function by pressing down hard on the brakes when stopped; pressure will remain on the brakes until the driver can push the gas pedal and get the car going again.

Compare the 2021 Nissan Sentra SV vs SR Trims. What is the difference?

The SR takes many things to a new level. It is more advanced in terms of available technology, and it has extra stylistic details that many consumers will notice. While the SR does feel sportier than the SV, it has the same mechanical components. It uses the same engine, transmission, and suspension. Perhaps Nissan missed an opportunity to enhance the SR's performance, but this decision has kept the SR in a reasonable price bracket.

On the exterior of the SR, there are several different features than what are found on the SV. The SR has 18-inch wheels instead of 16-inch ones. It uses LEDs in its headlights, fog lights, and Daytime Running Lights. There are LED turn signals built into the heated outside mirrors as well. The SR has a dark chrome V-Motion grille in the front, whereas the SV has a chrome one. The SR has a bold appearance, thanks in part to black exterior mirrors, side sill extensions, and a chrome exhaust finisher. As with the SV, the SR has an available power-sliding moonroof.

People will quickly pick up on the fact that the SR has a more premium cabin than the SV does. It has sport cloth upholstery that is accented by orange stitching. Its shift knob is wrapped in leather, and it has many available upgrades, like a heated steering wheel, heated front seats, and synthetic leather seats. If people are concerned about glare at night, then they can choose to get an automatic-dimming rearview mirror in the SR. Upon detecting the presence of bright lights, this mirror can make adjustments so that the light doesn't bother the driver so much.

The infotainment system on the SR trim is the same as what the SV has. All the basics are there, such as smartphone connectivity and SiriusXM Satellite Radio. The SR comes with the opportunity to upgrade the technology package with a Wi-Fi hotspot and NissanConnect Services. This lets people use their smartphones and select other devices to connect with their cars. With NissanConnect, people can remotely pinpoint their vehicles' locations, start their engines, check on vehicle diagnostics, lock the doors, and more. It's another way that technology can be interwoven into daily lives, and some people will definitely take advantage of these available upgrades.

Since there are only three trims available with the 2021 Nissan Sentra, the choice of which trim to select isn't as complicated as it could otherwise be. Basically, people have to decide whether or not they want to save as much money as possible and get a model with minimal features. If so, obviously the S is going to be the one to pick. It runs just as well as the other trims, and importantly, it has a touchscreen, smartphone compatibility, and driver-assist technology.

There are many potential buyers who want to be budget-conscious but are also interested in treating themselves to something more than what's standard. Some of the SV's upgrades are remote start, advanced cruise control, and an intelligent key. This makes the SV worth the cost for many people. Of course, there's always the SR, with its cool exterior details, larger wheels, and many available technological features.

If style matters a lot to a potential customer, then the SR would be the most recommended trim. If style isn't the top priority, though, the SV trim would come out as the leader. It can keep people satisfied with its affordability and number of amenities.

Save Money on a 2021 Nissan Sentra:
Are you Shopping for a New Vehicle? Find the Best Deals with "Free - No Hassle" Prices Quotes.