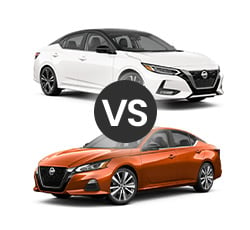 2021 Sentra vs Altima - How do they stack up? What are the differences?

Trying to decide between the 2021 Nissan Sentra and the 2021 Nissan Altima is a little bit easier said than done. It all depends on whether you want a small or mid-size sedan. The Sentra and Altima are extremely similar otherwise, but there is one that does have a slight advantage over the other for some drivers.

The 2021 Nissan Sentra is a small sedan that now comes with standard smartphone app integration via Apple CarPlay and Android Auto on all trim levels. The line-topping SR trim level comes equipped with remote control and remote services as well as 4G LTE WiFi hot-spot connectivity. Aside from those handful of tech changes, nothing else is new for the 2021 model year.

The Sentra offers a cozy ride quality inside of its cabin. The materials used in its design are also improved over what they used to be and do not come off as being too cheap or flimsy. You also get a pretty lengthy list of standard safety and infotainment features to help meet your needs.

On the downside, the Sentra is powered by a weak engine that provides lackluster acceleration. The 149-horsepower 4-cylinder engine is paired with a continuously variable automatic transmission (CVT) which is oriented toward fuel economy. Unfortunately, this powertrain is not very well balanced. Also, The infographics on the screen come off as being outdated, and the engine braking performance is definitely subpar.

So, just how does the 2021 Nissan Altima compare to its smaller sibling? This mid-size sedan offers a lot of what you get on the Sentra, but these two sibling cars have their differences. On the Altima, there is a turbocharged engine option, but it is only available on the mid-tier SR trim level. The SV trim level has dropped in price for the model year, but that is due to the fact that it has lost some features instead of gaining more.

The Altima does give you the advantage of adding semi-automated driving assistance as part of the Nissan ProPilot Assist System. ProPilot will likely be the one reason why people choose the Altima over the Sentra aside from space. However, among the rest of its competition, the Altima is pretty average. The Mazda 6 and Honda Accord best the Altima in a number of ways despite the Altima's easy-going nature and above-average fuel economy numbers.

Unfortunately, the Altima is held back by some of the same issues you get on the Sentra. Rear visibility is atrocious due to the thick roof pillars, steeply sloping roofline, and remarkably low-resolution back-up camera. You also have to put up with a steering system that is slow to respond and feels too light most of the time. It just does not firm up when it needs to. Not to mention, the finish and fit of the interior materials is drab. And the base S trim level is much more poorly equipped than most entry sedans in the segment. You might as well buy a base trim on an economy vehicle.

As we already mentioned, the 2021 Nissan Altima is powered by just one powertrain: a 4-cylinder engine that puts forth a power output of 149 hp. The CVT it is paired up with delivers power to the front wheels. FWD is the only drivetrain available; you cannot get all-wheel drive (AWD) at all. The engine gets the vehicle from 0 to 60 miles per hour in 8.8 seconds, but it loses steam after take-off.

The 2021 Nissan Altima is powered by a base 2.5-L 4-cylinder engine that generates a power output of 188 hp and 180 lb-ft of torque. A CVT directs power to the front wheels on that engine. There is an optional turbo engine that comes with AWD on the SR trim level (it used to come on the SV and SL as well). It is standard on the line-topping Platinum trim level and comes with AWD. It does, however, take the power output down (to 182 hp and 178 lb-ft of torque, to be exact) instead of increasing it.

What makes a vehicle a pain or a pleasure to drive? When we talk about drivability, we talk about multiple influencing factors that make for a well-rounded experience. Those factors include how quickly a vehicle accelerates, how strong its brakes are, how well it handles and steers, how comfortable its ride quality is, and just how functional its included technology happens to be.

For the 2021 Nissan Sentra, it is all about practicality. The initial burst of power for acceleration is respectable enough, but it does not sustain well after that. It is, at least, similar in acceleration rate to a few other vehicles in its segment. The CVT is actually quite good at delivering smooth amounts of power during regular driving scenarios. However, you do not get a whole lot of effect from the engine braking when you take your foot off of the gas pedal, meaning that you will have to put more effort and forethought into coming to a halt. This is not exactly helpful when you need to make a sudden panic stop, of course. This vehicle needs 131 feet to come to a dead stop from 60 miles per hour, whereas the segment average is about 123 feet. Steering and handling are adequate but do nothing to stand out.

Comfort is something that Nissan typically does well enough, but not always as well as top rivals like Honda and Toyota. The Sentra's ride quality remains comfortable and composed with relatively few bumps ever making their way into the cabin. The suspension is thorough about smoothing them out as the tires encounter them. You do get a floaty feeling at highway speeds though, and road noise is always there but at least not overly obnoxious. The front seats have a good amount of cushioning, but the rear seats are actually better. They are built to comfortably house two average sized adults and pack in a lot of support. There are no rear HVAC vents, but that is the case for most small sedans.

The controls up front are intuitively laid out and easy to reach for when needed. Everything looks to be appropriately labeled, so you will always know what it is you are doing with the controls. Even the 8-inch touchscreen display is user-friendly and straightforward in its design. The front is spacious, and the rear has leg room in spades - one of the best sizes in the class. Visibility is clear on the sides, but the rear view is hindered a bit by the thick roof pillars and sloping roofline.

Nissan includes a ton of standard tech features on the Sentra. You do have to opt for fancier stuff like the 360-degree surround-view camera and the adaptive cruise control feature. A few features could be improved upon, as the back-up camera can be glitchy at times. You might also get some false warnings from the forward collision mitigation system.

The 2021 Nissan Altima is, certainly, a lot like the Sentra - with a few key differences. Braking and acceleration are both pretty mediocre on the Altima and are probably not going to impress too many potential buyers. The 2.5-L engine with AWD takes a whopping 8.4 seconds to get from 0 to 60 miles per hour. There are third-row SUVs that can make it there more quickly. On the plus side, the CVT is tuned for efficiency and still delivers a smooth and steady power supply to the wheels. The handling feels stable enough while rounding through turns, but steering is far too vague and floaty to inspire any confidence. Thrilling, it is not.

When you are making a daily commute, the Altima remains comfy enough. The front seats are padded well enough and provide support in just the right areas, save for the thighs. The cabin does remain well muted from engine noise; even under hard revving, the engine is somewhat tranquil. The Altima just does not do as thorough of a job at smoothing out road imperfections as the Sentra. You will feel quite a few little bumps making their way into the cabin. As for bigger impacts, well, those are nothing short of jarring to the Altima's occupants. Nissan could do with putting more refinement into the Altima's suspension. This is where the Altima really shows a lack of refinement compared to the Sentra.

The interior overall is less refined than the Sentra's too. Both are nothing to marvel at in terms of aesthetics, although both are at least user-oriented. You can find the controls with ease, and there is no guesswork as to which knob or button controls which feature. However, the low-res back-up camera makes it all the harder to guess what is behind the Altima. The thick roof pillars and sloping roofline limit rear outward visibility with the naked eye.

The tech included on the base trim will do very little to impress you, but once you work your way up the trim level ladder, you will find more to enjoy. The standard sound system is easy to use, and smartphone app integration comes standard. Bluetooth allows for clear phone reception but can be glitchy on occasion. The ProPilot Assist system is really where it is at though. Its adaptive cruise control is one of the best out there and hardly ever requires manual corrections while driving.

Like most automakers these days, Nissan equips its vehicles with a long list of standard safety features. Airbags, lighting, and security systems all come standard, of course. However, you also get Nissan's bundle of standard driver aids on both the Sentra and the Altima. These features include a forward collision warning, which will alert you if it senses a potential front-end crash coming up and will try to help you avoid it. It will even apply the brakes when it detects a pedestrian about to stray into the vehicle's path. Lane departure warning alerts you when the system detects the vehicle straying over the line and will gently steer it back into the intended driving lane. Blind-spot monitoring alerts you if there is a vehicle in the next lane over that is driving in your blind spot.

Although we like the Altima's size and ProPilot Assist, those features alone cannot save it. The Sentra has the more refined ride quality, which is a deal-breaker on the Altima. These vehicles both do really well on fuel economy, sliding in above the segment average each. But the Sentra has a little more to offer when it comes to refinement.

This is a close race between siblings, but we have to hand it to the 2021 Nissan Sentra for providing a more comfortable ride than the Altima. We wish the Sentra would offer an AWD option and a few more standard features, but its ride quality and comfort are certainly better than the Altima's.

Save Money on a 2021 Nissan Sentra:
Are you Shopping for a New Vehicle? Find the Best Deals with "Free - No Hassle" Prices Quotes.