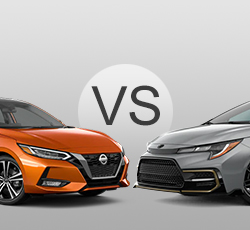 Both the 2021 Nissan Sentra and the 2021 Toyota Corolla are classified as compact cars. One thing to know right out of the gate is the Sentra is only available as a sedan, whereas the Corolla can be had as a sedan or a hatchback. That said, they both are popular options when it comes to smaller vehicles, making them worth a comparison.

In 2021, the Nissan Sentra gives its base model Android Auto and Apple CarPlay. The top SR trim is now available with a Wi-Fi hotspot as part of the optional NissanConnect services. Otherwise, this model enters the new year relatively unchanged.

For the 2021 Corolla, Toyota finally caves and adds Android Auto. Those who want a sedan now have the Apex Edition model to consider. Hatchback fans now have a Special Edition model, although only 1500 will be made.

Now that both options offer smartphone connectivity across the board, the competition between the two is tighter than ever. When looking at them in detail, it is easy to see that they each have their own strengths and weaknesses. The ultimate question becomes - which is the better compact car?

There is only one powertrain for the Nissan Sentra in 2021. The 2.0L four-cylinder engine is good for 149-horsepower and 146 lb-ft of torque. While this is enough for most driving situations, it is unlikely to get anyone's heart pounding. The sole transmission option is a CVT. Many feel that this transmission lacks the smoothness of other CVTs out there.

Most sedan models of the 2021 Corolla give drivers a 1.8L four-cylinder engine that produces 139-horsepower and 128 lb-ft of torque. This engine always pairs with a CVT. Optional for select sedan models and standard for all hatchback models is a 2.0L engine that can make 169-horsepower and 151 lb-ft of torque. It can be paired with either a six-speed manual transmission or a CVT.

The base engine of the Corolla is even less powerful than the one under the hood of the Sentra and is equally mediocre. As for the 2.0L option, it does a much better job of getting the Corolla moving and feels more capable on the highway. The fact that it can pair with a manual transmission also makes it the better choice for those who value performance.

Two of the three Sentra models are EPA estimated to get 29mpg in the city and 39 mpg on the highway. The more performance-oriented SR model goes down to 28mpg city and 37mpg highway. Both sets of numbers are right around average for a new compact car.

For the base engine, the Corolla is capable of getting 30mpg city and 38mpg on the highway. One might assume that the more powerful engine is less efficient, but that is not the case here. The 2.0L engine in the sedan can get 31mpg city and 40mpg highway with its CVT.

Hatchback models have their own sets of numbers. With the six-speed manual, buyers are looking at 28mpg city and 37mpg highway. The CVT improves these numbers to 32mpg city and 42mpg highway.

The Corolla is not done offering options when it comes to fuel efficiency yet. This vehicle is also available as a hybrid, which is EPA estimated to get 53mpg city and 52mpg highway. These are hard numbers to match, even by other hybrids. On the downside, the hybrid powertrain produces only 121-horsepower. All models of both the Sentra and Corolla come exclusively with front-wheel drive in 2021.

Reliability is another important thing to keep in mind when shopping for a new vehicle. J.D. Power provides consumers with predicted reliability ratings. The 2021 Sentra got a concerning score of only 2.5 stars out of five. At the same time, the 2021 Corolla got an excellent score of 4.5 stars. This factor alone may be enough to have buyers choosing the Corolla over the Sentra.

The 2021 Sentra and 2021 Corolla offer identical warranties. They include a three-year or 36,000-mile limited vehicle warranty and a five-year or 60,000-mile powertrain warranty. While these lengths of time may be adequate for the reliable Corolla, they may leave drivers dealing with large repair bills for the Sentra in the not-too-distant future.

When it comes to handling, the Sentra does a respectable job. The suspension will absorb most normal bumps in the road, and the steering is responsive. On the other hand, the Sentra is far from athletic and will not give drivers an engaging experience at the wheel.

The Corolla can be described in a similar way. Sedan models feel more composed on rough roads than their hatchback counterparts. There are also SE and XSE models for buyers to consider if they are looking for something a little sportier, although most upgrades are more concerned with appearance than actual performance.

Pop the trunk of the 2021 Sentra, and there will be 14.3 cubic feet of cargo space. This is slightly smaller than most rivals. Interestingly, the Versa, which is the subcompact sedan option in the Nissan family, offers a larger trunk.

The Corolla's numbers are even more depressing, at least when it comes to the sedan. It has only 13.1 cubic feet to work with. The hatchback takes this number up to 17.8 cubic feet, which is still disappointing when compared to rivals. However, the hatchback's backseats do fold flat, giving drivers up to 23.3 cubic feet.

Many will feel that the cabin of the Sentra is nicer than that of the Corolla. It does a better job of blending hard and soft plastics, and also has unique styling touches such as round air vents. The Corolla's cabin is well-built but its style will not appeal to every driver.

In 2021, both the Nissan Sentra and Toyota Corolla come standard with Android Auto, Apple CarPlay, and a 7-inch touchscreen. The Corolla also comes with Amazon Alexa, a Wi-Fi hotspot, and satellite radio. While the Sentra has one USB port and four speakers standard, the Corolla has two USB ports and six speakers.

Both of these compact cars have 8-inch touchscreens in select models. A Wi-Fi hotspot and satellite radio can also be found in select Sentra models. The Corolla has a far more impressive available technology list, which includes wireless device charging, a 7-inch digital display cluster, and a nine-speaker premium audio system.

The touchscreen in the Corolla is more responsive than the one in the Sentra, resulting in a less frustrating experience. Both include physical controls on top of the touch controls, however, which may help the Sentra make up for this flaw. When it comes to graphics, the Corolla wins once again.

Both of these compact cars performed well in testing conducted by the National Highway Traffic Safety Administration. For the Sentra, they awarded five stars in side crash and rollover testing and four stars in frontal collision testing. The overall score was five stars. For the Corolla, they awarded five stars in the frontal collision and four stars in the rollover testing. It, too, got an overall score of five out of five stars.

The standard driver assistance feature list for the Sentra is quite long and has some driver favorites, such as automatic high beams and blind-spot monitoring. Other features found on all 2021 Sentra models include pedestrian detection, lane departure warning, traffic sign recognition, and forward and reverse automatic emergency braking. Adaptive cruise control and a surround-view camera system are the available upgrades.

Meanwhile, the Corolla comes with adaptive cruise control on all models with the CVT. However, blind-spot monitoring is found on its optional rather than its standard feature list. Otherwise, it comes with the same driver aids as the Sentra, plus lane trace assist. The Corolla is also the only one of the two available with adaptive headlights.

Buying a new 2021 Sentra will cost around $19,410 for the base model. The top SR trim is not much more expensive, with an MSRP of $21,750. These numbers are considered average for compact sedans.

Of course, the argument can be made that the extra tech and safety features found in the Corolla justify the extra cost. The next question is which of these two will cost less over the years. To do that, drivers need to compare the true-cost-to-own for a five-year span.

Estimates for the 2021 Sentra are not out, but the 2020 model is very similar. Kelley Blue Book estimates that the Sentra will cost drivers $32,295 over the course of five years. They arrive at this number by combining out-of-pocket costs and the depreciation of the vehicle, which is significant in the case of the Sentra. Another way to look at it would be that the Sentra costs $0.43 per mile to drive.

The 2021 Toyota Corolla sedan does quite a bit better. It is estimated to cost $28,414 over the same five-year span. A large part of this involves depreciation. The Corolla is estimated to lose over $1,000 less of its value in five years. It is also estimated to cost drivers much less when it comes to maintenance and repairs. Buyers can assume the 2021 Corolla will cost around $0.38 per mile to drive.

Hatchback models of the Corolla also hold their value much better than the Sentra. They do not do quite as well as the sedan version, however, and are estimated to cost $0.39 per mile. That same number is true of the hybrid numbers as well.

Although the Sentra looks like the more affordable option at first glance, savvy buyers will realize the Corolla will end up costing them less. Not only will they be shelling out less for repairs and maintenance, but they will also be able to get more for their vehicle when it comes to trade it in or sell it.

The 2021 Nissan Sentra has a lower initial cost and a bigger trunk. By adding smartphone integration on all models, it has come closer to being the right choice for drivers. For the time being, however, that title belongs to the 2021 Toyota Corolla.

Not only does the Corolla offers three powertrains, including a hybrid, but it also comes in two body styles. It has more standard and available technology and safety features as well. Plus, it will be a lot easier on the wallet as time goes on. The 2021 Toyota Corolla wins the battle against the 2021 Nissan Sentra.